PORT-AU-PRINCE — Every day for the past week, Emanuel Eliacin has led an operation that seems like Mission Impossible: Select a thousand 11- to 16-year-olds from camps for the displaced population, put them on 20 buses, and drive them to a day camp. Let them run around, play sports and games, dance, draw or take part in a wealth of other activities. Feed them, and then get them safely back to their parents at the end of the day.

In the earthquake-stricken Haitian capital, temporary settlements have spilled into parks, side streets, squares, even golf courses. Addresses are non-existent and communication is mostly by word of mouth.

In this environment, Eliacin’s task seems Herculean, but appears to be carried out in an almost mystifyingly organized manner.

It takes a team to run the operation

Part of the explanation lies in his team of logisticians, community patrol members, drivers, activity leaders, and therapists. Altogether, nearly 200 of these professionals make sure the operation runs smoothly, and that everybody gets back to where they came from.

Participants receive white T-shirts with the Ministry of Youth’s logo so that facilitators and other staff can be sure that they were on the bus that day. Participation is limited, and parents have to register their children with community patrol members in advance.

Information about the Camp de l’Avenir programme is disseminated by megaphone in the camps.

The total displaced population in Haiti is now estimated at 1.2 million, and a high proportion is young people. In Champs de Mars alone – the city’s main square which faces the ruins of the Presidential Palace – an estimated 15,000 people are camped out, nearly 3,500 of them under 15.

Camp de l’Avenir’s programme is expected to cost more than $750,000, which the Ministry is still trying to raise. UNFPA, the United Nations Population Fund, has contributed $100,000, while the World Food Program is providing food for the two meals served each day. Organizers hope to keep the programme running for a total of six weeks, until school starts again.

An antidote to boredom, and a place to get some help

Cassandra Antoine, a 13-year old girl who plays soccer in one of the groups in the day camp says she otherwise has nothing to do. “I don’t feel good about doing nothing,” she says.

Dickinson Jeudy (12) says he plays football [soccer] all the time, because he says he wants to become a ‘big-time player’ so he can help his family. 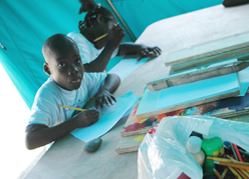 Drawing represents a chance for young people who are living in camps for the displaced population to express what is on their mind. Photo: Trygve Olfarnes/UNFPA

Nathalie Heyliger, a psychology student, is one of the camp counsellors. She observes the participants as they draw, dance and play. “If someone is very messy or extremely shy, that usually means something is not right,” she says. “Some of them say they do not want to live. They are not interested in participating in any of the activities. Others are just paralyzed with fear of another earthquake.”

The camp has 40 psychologists, but with so many children and young people, it is difficult to help everybody who needs it. “Every child here needs therapy,” says Heyliger.

The day camp also offers workshops where participants can sit down and talk about things that are on their mind. Drawing is another very popular way of expressing thoughts and feelings. One of the workshops offers information about sexual and reproductive health. There is even a group which aims at constructing a house built from plastic bottles filled with sand.

UNFPA is supporting the activities as part of the organization’s long-standing support to youth programmes all over the world. The organization works to empower adolescents and youth with skills to achieve their dreams, think critically and express themselves freely. It also promotes health, including access to information about sexual and reproductive health and services.