Globally, the vast majority of people who are HIV-positive – 80 per cent – contracted the virus through unprotected sex – that is, by not using a male or a female condom. This raises a crucial question: Since condoms can save lives and prevent disease and unintended pregnancies, why don’t more people use them consistently? And what tactics do people employ to encourage their partners and clients to use condoms?

These are questions that the UN Population Fund , UNFPA, seeks to answer through a series of interviews with condom promoters – and users – worldwide. We begin on World AIDS Day, with Morocco and Egypt, two countries with a low prevalence of HIV, little open discussion of who is at risk and not enough access to condoms. In these and other countries, the stigma attached to HIV and condoms is a barrier to prevention and puts many people at risk. -- Kristin Helmore

The Situation in Morocco

Despite the sanctity of the institution, marriage places many women around the world at risk for HIV infection. For many reasons – cultural and otherwise – married women are especially vulnerable to getting infected, largely because of the stigma attached to condoms.

Morocco has recognized this problem, even though its HIV prevalence is low over all (less than 0.1 per cent, according to UNAIDS). Most HIV-positive women in Morocco, it turns out, were infected by their husbands, says Azzouz Ettoussi of the Pan-African Organization to Combat AIDS, known as OPALS. And the options for the women remain limited.

“Some women come to us and say: ‘I suspect my husband because he has relations with sex workers. What should I do?’ ” Mr. Ettoussi says. “Can she insist that her husband use a condom? Not likely. Most of the time the husband would just deny that he has other relationships.” 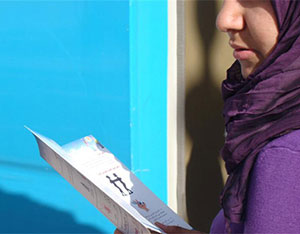 In Egypt, UNFPA provides helpful information on voluntary counselling and testing for HIV.

OPALS is one of the most active organizations in Morocco working to stem the tide of AIDS. It operates 17 drop-in clinics that provide health services, access to condoms and HIV screening. Representatives from OPALS even go door to door in remote areas to offer HIV-screening and spread the word about the risks of HIV.

In addition to targeting young people, sex workers, migrants from sub-Saharan Africa and people in hard-to-reach locales, OPALS is reaching out to married women, who make up 61 per cent of female adults in Morocco. “We target women in general because women in the Arab world face special difficulties,” Mr. Ettoussi says. “This is especially true for married women who don’t work, who stay home. They have specific problems because, in Morocco, sexual education is taboo.”

In Middle Eastern societies in general, information about sex is hard to come by, especially for women. “People don’t discuss it with their parents,” Mr. Ettoussi says, “and women are not supposed to talk about sexual relations except with their closest women friends. People think of sex as dirty, and so a woman wouldn’t dare ask for a condom in a pharmacy. People would think she is a sex worker.”

The stigma attached to AIDS is so great that a woman will not visit a clinic that openly offers only AIDS treatment and prevention, such as access to condoms. OPALS therefore provides general medical services as well as AIDS-related services in its centres. “We don’t want our centres to be stigmatized,” Mr. Ettoussi says. “We don’t advertise the fact that we treat AIDS.”

The strategy seems to be working. Even women who seldom leave their homes and have little contact with the outside world come to OPALS centres for general health services, which include gynaecology. Once there, they receive HIV counselling and screening if they suspect that their husband may be infected. 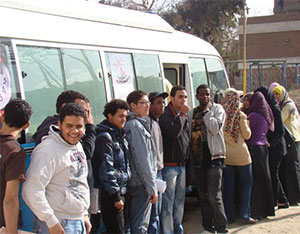 A mobile clinic, supported by UNFPA and the Egyptian government, offering information on HIV prevention.

Preventing HIV among married couples in Moroccan society is even more difficult because few people know their HIV status. Before being married, both partners are required by law to obtain a medical certificate stating that they are in good health. The law, however, does not make screening of sexual transmission infections, including HIV, mandatory.

The main obstacles to condom use in Morocco are cultural, psychological and financial, since condoms usually are not free. Access is also a problem, as condoms are not readily available in public settings.

“In our country, it’s difficult for anyone to demand that men use condoms,” Mr. Ettoussi says, “because condoms are always associated with sex work in people’s minds. So a woman can’t insist that her husband wear a condom because it will undermine trust between them and hurt the relationship.”

OPALS is working to change these attitudes through awareness-raising and public-information campaigns. Women also have some legal protection. Morocco’s Family Code of 2004 grants a woman the right to divorce her husband if he is HIV-positive. For a philandering husband, the mere possibility of divorce may prompt him to change his behaviour, either by consistently practising safe sex or by giving up his extramarital sexual activities. If the divorce threat doesn’t help, the wife can end the marriage, although in a conservative country (and, indeed, in many liberal ones), that presents a new array of problems for women.

In other efforts to help women avoid HIV infections, OPALS studied 100 sex workers to find out whether they would accept and use female condoms. The study, supported by UNFPA, may be the first of its kind in North Africa. It showed that 4 per cent used a condom with all clients, 76 per cent tried to use one, but few clients accepted. The study also showed that women were receptive, but their partners react negatively.

In 2012, UNFPA plans to support a larger project on female condom acceptance among more women, including those married and younger, to help build their negotiation skills and provide them with this lifesaving tool.

“We already advise women who feel at risk of HIV, sexually transmitted infections and unintended pregnancy to use a female condom, and we show those who are willing how to do so,” Mr. Ettoussi says. “Some will explain the female condom to their husbands by saying that it will prevent pregnancy, or that it’s simply more sanitary. Some will just say, ‘I have to protect myself.’ ”

In Egypt, condoms fall under the radar

Married women are not specifically targeted in prevention programmes in Egypt, and the very mention of condoms remains largely taboo in society. With support from UNFPA and the Ministry of Health and Population, mobile clinics are providing voluntary counselling and testing for HIV and targeting groups considered high-risk: injecting-drug users, sex workers and men who have sex with men. Family Health International is an executing agency providing technical assistance to UNFPA’s collaboration with the Ministry.

“Egypt has low HIV prevalence with a concentrated epidemic in some most at-risk populations,” says Ziad Rifai, UNFPA’s representative in Egypt. “Since there are limited resources and other health concerns, at this stage, other than awareness-raising, the general population may not need to be targeted.” But according to Cherif Soliman, country director of FHI in Egypt, if the general population is ignored, there is a risk that the infection rate, still low (less than 0.1 per cent, according to UNAIDS), could spread. 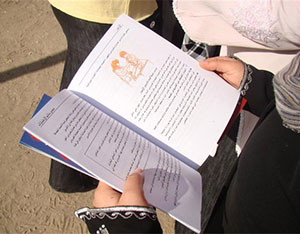 “If you target only one population, you increase the stigma associated with condoms,” says Dr. Soliman. “People think, ‘Those people, they are the ones who need condoms.’ But what about the rest of us? We need a holistic way to communicate about condoms. If you discriminate at your entry point, you are already limited.”

Besides married women and men, unmarried couples in Egypt are also at risk. As in other countries in the region, an informal, or unregistered, marriage system exists. A couple can decide to be together for a limited period of time without anyone’s knowledge and without incurring the responsibilities (or the expense) of an official marriage.

Some men, and even some women, enter into such an arrangement with a series of partners. Although usually sexually intimate, the couples do not live together and their relationship is not publicly recognized. For that reason, it is even more important that these couples prevent pregnancy along with sexually transmitted infections, including HIV.

But these couples, and unmarried people generally, are not regarded as a population that needs access to condoms, and information about their use is scarce. Yet condoms are in large supply. “Condoms are everywhere in Egypt,” says Dr. Soliman. “They are at all supermarkets next to the cashier so you don’t have to search for them. They are in all pharmacies; they are given out free by the government.” The problem is that people “don’t like them.”
“Buying condoms marks you as a liberal in our conservative society,” he says.

Promoting condoms in Egypt must be done with the utmost discretion, or, as Dr. Soliman puts it, “camouflage.” “People understand very well what they want. They want to prevent sexually transmitted infections and they want someone to pass the condom to them, but they cannot say, ‘Let’s talk about condoms.’ ”

Condom programming is not done for the general public, even for family planning purposes, and condoms remain the least-used tool for preventing pregnancy. “They are widely available, but nobody is talking about why, in terms of preventing pregnancy and disease, condoms are valuable,” Dr. Soliman says.

Egypt, he says, is caught in a bind of cultural traditions that stigmatize condom use. Yet he insists that the root of this discomfort is not Islam but age-old attitudes that affect both the Muslim and the Coptic Christian communities. In 2004, FHI in Egypt convened a landmark conference of more than 80 Arab religious leaders who openly and forcefully addressed the AIDS crisis and signed a declaration endorsing the use of “all possible preventive means available” to check the spread of HIV, including condom use for all couples.

“We need a standard approach that can be adapted for every group, from drug users to ordinary unmarried and even young married couples,” Dr. Soliman says. While another kind of revolution may be needed in Egypt to garner wider acceptance of this idea, the spread of HIV will continue. – KRISTIN HELMORE

Although HIV prevalence is still very low in Morocco and Egypt, it has the potential to spread. And combating it remains especially problematic because of cultural and other taboos surrounding issues relating to sex.

“We’re featuring stories from these two countries because many young people are sexually active there and run the risk of contracting HIV or having a child before they are ready to become a parent,” Ms. Deperthes explains. “In these countries, women struggle to have access to female condoms or to insist that their husbands use condoms.”
Part of the solution, she says, is opening up the conversation about AIDS – even in countries that are at low risk.

“AIDS is not only a problem in some countries in sub-Saharan Africa, where prevalence rates could approach 10 to 30 per cent,” she says. “It is a problem in any place where people are becoming infected. We need to talk about that.” – LOIS JENSEN

Statement at the 55th Annual Conference of NGOs -- "Rebuilding Societies… 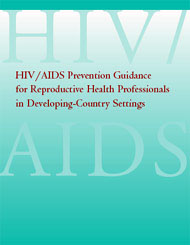