In one of her first official mission as Patron for UNFPA to support the agency's work to promote maternal health and safer motherhood, H.R.H. Crown Princess Mary participated in Women Deliver II, a major international conference dedicated to maternal health.

Following a panel discussion on obstetric fistula, she spoke with two fistula survivors. The compelling stories of Sarah Omega and Awatif Altayib, who have now become advocates for maternal health, moved the Crown Princess. They discussed the need for stronger health systems, so that obstetric fistula can become as rare in developing countries as it is in Scandinavia. 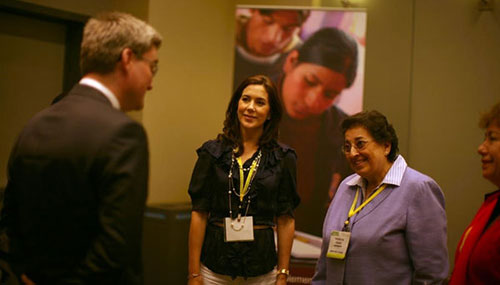 In spite of the many tragedies discussed at Women Deliver, the thematic messages that emerged from the global conference were positive and resolute, and they are ones that the Crown Princess is committed to helping deliver:

In Yemen and around the world, obstetric fistula strikes the most vulnerable…