UNFPA Executive Director Dr. Babatunde Osotimehin urged that young people be given space and opportunities to contribute to national development in Botswana. Dr. Osotimehin made this call at a discussion with youths during his recent visit to the country.

The Botswana Family Welfare Association (BOFWA) in collaboration with UNFPA organized the forum to create an opportunity for about 30 youth representatives to discuss with the Executive Director components of the ICPD Beyond 2014 that relate to youth development in Botswana.

Dr. Osotimehin said that youths could only offer solutions to global challenges if they had access to proper health services, quality education and empowerment. He indicated that commitments should be made to ensure “provision of services for prevention of teenage pregnancy, HIV transmission and abuse.”

On issues related to gender-based violence, he emphasized that when young people are violated, they are at a higher risk of pregnancy. He argued that social media have a prominent role in empowering young people with knowledge through passing information to direct them to where services are and the availability of a mix of services for choice. However, the Government, together with its partners such as UNFPA, has a responsibility to ensure that young people are equipped with information to educate themselves, he added. 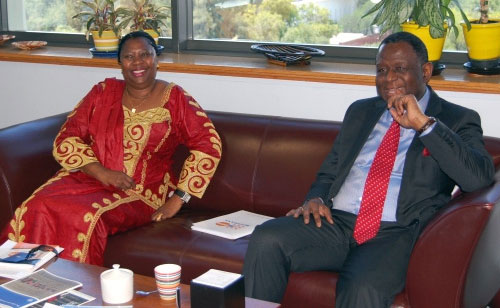 UNFPA Country Representative Aisha Camara-Drammeh said the purpose of the forum was to create a platform to incorporate issues relevant to young people into the review process for the International Conference on Population and Development (ICPD), and to place adolescent and youth needs prominently on the map of the post-2015 development framework discussion.

In response, the young people challenged adults to acknowledge that they are the leaders of today. Having embraced new technology by sharing information, young people have managed to bring the world closer to them through ICT, connecting with each other using Facebook and Twitter. They highlighted the pressing need to be recognized and for their skills and experiences to be utilized. There was agreement with Dr. Osotimehin that their education has not prepared them as young people for the job market, however, the focus during their studies being on information rather than studies. They made a strong call for internships to be offered to them during the course of their studies rather than at the end, which is usually the case. The curriculum should match the needs of the labour market, they argued.

The Executive Director challenged the young people to ponder their prospects and role in the development of Botswana and asked each of them to consider what they could do for the development of their country, focusing not on themselves but on at least five other young people, to create a multiplier effect. He said he expected their response on his return visit within twelve months.

Dr. Osotimehin advised the participants that they have a responsibility to ask for resources to achieve growth. He also urged them build their confidence, assert their rights and take charge of their own bodies.