Counsellors reach out to Kachin communities to end gender violence

WAING MAW, Myanmar – “We should not have to live in fear of violence just because we are women,” Khaung Nan declared in Waing Maw, a town in Myanmar’s battle-worn Kachin State.

Ms. Khaung Nan works at the Waing Maw Women’s and Girls’ Centre, one of eight such centres in the area. These UNFPA-supported facilities provide counselling, legal assistance, transport to hospitals, and other care for survivors of abuse.

The services are critical: Gender-based violence is a silent emergency in Myanmar. Women and girls experience harassment on the streets, domestic violence and even human trafficking. And those in Kachin State face the additional turmoil of armed conflict, conditions that exacerbate their vulnerability to gender-based violence.

“We have the right to live in peace in our homes and in our country,” Ms. Khaung Nan said.

But this right is too often denied. 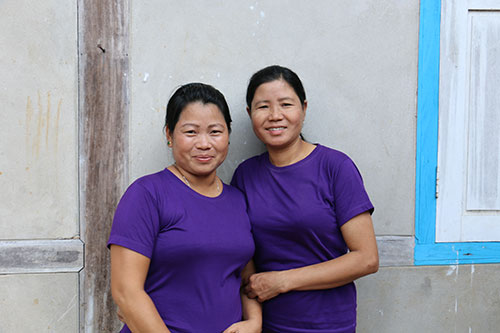 Khaung Nan and Lu Bu at the Women's and Girls' Centre in Waing Maw. © UNFPA/Yenny Gamming

Gender-based violence is greatly underreported, but experts believe it to be commonplace.

“One evening a corner shop on my street was tended by a high school girl,” said Daw Lu Bu, a counsellor at centre. “A young man buying cigarettes demanded more cigarettes than he had paid for, and when she said no, he shouted at her and grabbed and pulled at her breasts.”

Ms. Lu Bu helped the girl report the crime. “He is now being prosecuted,” she said.

Still, there is a high degree of acceptance of violence against women.

Marital rape, for instance, is still not considered a crime. And about half of people surveyed in Myanmar say there are circumstances that justify wife-beating.

Ms. Lu Bu finds herself bringing her work home with her – she addresses threats to women in her own town of Myitkyina.

“In my neighbourhood, too, there is domestic violence. I always try to help. Only last month, a woman approached me for help. Her husband was blaming her for giving birth only to daughters, and he was being very aggressive.

“I sat down with both of them and discussed different aspects of fertility, and also explained that the sex of a baby is determined by the sperm from the man. I managed to find a way to say this without blaming or further upsetting the man.”

Her efforts worked – at least for now. “So far, the man is calmer. I hope it lasts.”

Reaching out to communities is essential, not only for helping survivors but for preventing violence in the first place.

Staff and volunteers at the Women’s and Girls’ Centres go into displacement camps and surrounding communities to raise awareness about the issues surrounding gender-based violence and where survivors can seek help.

“The word is spreading not only in the camps, but in the host communities too,” said Ms. Khaung Nan.

“We’re now invited to give gender-based violence presentations in the villages, and when I arrive, I realize that most people already know that domestic violence is a crime.”

She is confident that, slowly, their message is getting through.

“But this is just the start,” she said.

The eight Women’s and Girls’ Centres cover 38 displacement camps and host communities in both government-controlled and non-government controlled areas.

The centres’ programmes are managed by Metta Development Foundation and supported by UNFPA’s Women and Girls First initiative, which receives funding from Australia, Canada, Finland, Italy, Sweden and the United Kingdom.

Staff members at the centres are optimistic that their efforts are making a difference.

“First, we focused our efforts on women and girls in the camps. Now we are expanding our work to the villages and to boys and men,” Ms. Khaung Nan said.

She added, “The Women’s and Girls’ Centre gives us the power to stop the violence.”