LUKULU DISTRICT, Zambia – Olivia Kaunda, 34, just moved to a shelter in the Luvuzi Rural Health Centre in Western Zambia. Eight months pregnant, this is the place she will call home for the next few weeks as she prepares to give birth in the adjacent clinic.

Ms. Kaunda, like many women in the Lukulu District, lives miles away from the nearest health centre. The long distances, coupled with a tradition of delivering at home, often prevent women from giving birth at health facilities with skilled birth attendants. This, in turn, has increased the risk of maternal death.

Luvuzi Health Centre is special in that it houses a ‘waiting shelter’ where expectant mothers can stay while they await delivery.

“I live in Munguli Village, about three hours walking [distance] from here,” Ms. Kaunda explains. “I was very happy to hear about this [waiting facility] because it would have been difficult for me to get here once I went into labour.”

Informing communities about the existence of the shelter, and its benefits for mothers-to-be, used to be one the main challenges facing local health workers. That is no longer the case.

Safe Motherhood Action Groups, or SMAGs as they are known locally, have taken on this critical role. 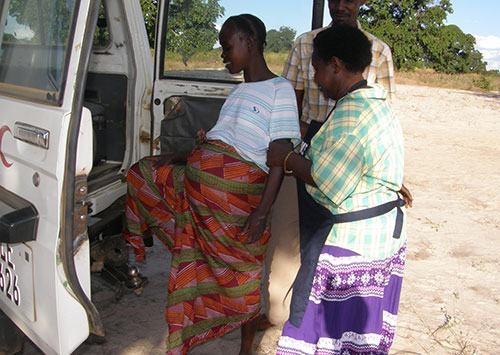 A concept developed by UNFPA in 2002, the SMAG programme helps to educate women and girls about maternal and neonatal issues at the local and household level and encourages them to deliver in health facilities rather than at home.

The SMAGs also work to increase male involvement in reproductive health and raise awareness about safe motherhood as whole.

“I was referred to the Luvuzi Health Centre by one of the SMAG members who visited my village,” says Ms. Kaunda. “She explained the importance of delivering my baby at a health facility. “I delivered my four other children at home, but this time I decided to go to the health centre because I have learnt that it reduces life-threatening complications when giving birth.”

The Luvuzi SMAG was formed in 2012 by the Lukulu District Health Office with support from the H4+ group, a joint effort by the United Nations and related agencies – UNAIDS, UNFPA, UNICEF, UN Women, the World Health Organization and the World Bank – to improve the health of women and children. This H4+ work is funded by the Government of Canada.

Serving a population of 4,485 people, the Luvuzi SMAG has 17 members, male and female, who act as the primary link between families and the health centre. They refer patients to the facility and call the ambulance when there is an emergency.

The maternity waiting shelter has also benefited from a recent facelift, which has contributed to its positive impact.

“Sometime back, when I escorted my friend to deliver her baby, the shelter had a leaking roof, there was no electricity and no doors,” Ms. Kaunda recalls. “But when I came this time around, I found it is clean, welcoming, and they have even provided mosquito nets for us.”

These improvements are mirrored by the number of safe deliveries taking place there: three years ago, the facility delivered about eight babies a month. Today, it averages 18.

Zero maternal deaths in the past two years

“Before the group [SMAG] was formed, a lot of women used to deliver at home. We also used to see a lot of our women dying during childbirth,” says Beauty Muchelekwa, a member of the Luvuzi District group. “But now, we are proud to say we’ve had no maternal deaths in our villages for the past two years!”

The programme has also had an impact on the health practices of communities throughout the district.

“Since we started our group, we have noticed that families have adopted more hygienic practices with infants,” says John Mwewa, another member of the Luvuzi SMAG. “We see more men escorting their wives to antenatal check-ups; women are booking early for giving birth at the facility… and more women are requesting family planning commodities.”

An ambulance donated by the H4+ group has had a particularly significant impact on operations, accelerating the referral system, especially during emergencies.

“We used to have to [hitch] hike [for] vehicles by the roadside,” Mr. Mwewa recalls. “It was very difficult because sometimes we would stand there for hours."

Since January 2014, the SMAG group has supported the distribution of 600 ‘mama packs’ containing cloth diapers, diaper fasteners, a traditional chitenge cloth, bath soap and a baby hat, and it has referred close to 90 women to the Luvuzi facility.