Conducting a Social, Demographic and Economic Survey of Afghanistan

BAMYAN PROVINCE, Afghanistan --- “No one has done a survey here before, and nobody knows the type of challenges we face here,” said Mohammad Ibrahim, a farmer from the Bamiyan province during the enumeration phase of the first large-scale data collection conducted in Afghanistan since the 1970s.

“I don’t know the exact number of people living here. It must be a lot,” Mr. Ibahim added.

Clearly ‘a lot’ is not sufficient information on which to plan schools and health clinics, roads and other infrastructure.

But now the answers are clearer: results from the first provincial Socio-Demographic and Economic Survey (SDES) in Afghanistan have been published, contributing to a greater understanding to the challenges the province faces, in terms of population structure, housing, infrastructure and more. 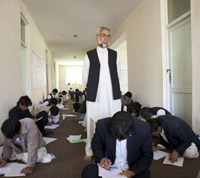 The SDES is the largest data-collection exercise in Afghanistan in more than 30 years. Photo: Lorenzo Tugnoli

After a long preparatory process, the Central Statistics Organization (CSO) of Afghanistan -- with the technical support from UNFPA, financial support of the Government of Japan and a contribution for the mapping process from the Government of Denmark -- has begun a large-scale survey, starting with the Bamiyan province.

“This activity is a milestone in the history of statistics in Afghanistan, as this is the first large-scale data collection activity since the 1979 population census,” said Mr. Ghafoori, President General of CSO during the press conference to launch the survey results. The 1979 census covered only two thirds of the country due to security problems.

The growing demand for reliable data

For nearly three decades, the Afghan population has been struggling to survive a myriad of social, political, economic and health problems. Getting reliable data has been a serious challenge due to inaccessibility and insecurity of certain regions. The lack of reliable and current population data has added to the impediments to development planning in Afghanistan.

The 2001 Bonn Agreement pointed to the importance of conducting a census in Afghanistan. This need became even more acute with the establishment of a new government and a move towards normalizing day-to-day governance. An attempt was made to conduct a national census in August 2008 but the worsening security situation compelled the Government to postpone the exercise.

With the growing demand for data, a group of census experts met in Istanbul in August 2010 to discuss the possibilities for a thorough census in Afghanistan. They agreed that the only feasible option, given the current situation, was to conduct a province-by-province census.

The statistics office conceptualized the SDES in 2011, with an emphasis on collecting the socio-demographic and economic data at the district level, province by province. Because of its relative security, Bamiyan became the first province to conduct such a large-scale survey.

A wealth of useful indicators 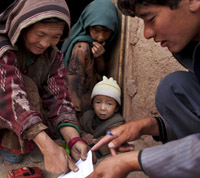 Success requires the cooperation of everyone. Photo: Lorenzo Tugnoli

The survey provides socio-demographic and economic indicators that are important for sustainable development of the province. Population size by sex and age, education levels, mortality, employment, source of drinking water, source of energy for cooking, heating, and lighting, materials of roof, walls, and floor, and other housing and household characteristics are essential data for responding to both problems and opportunities. With that accurate data, local and national authorities can find out the priorities for the people of Bamiyan and fill in some major gaps.

“This data will show us what we need. We know how many people are enrolled in schools but we do not know how many are out of school,” said Dr. Habiba Sorabi, Governor of Bamiyan Province, who strongly supported the survey.

“You cannot know where you are going if you do not know where you are,” said Jose-Miguel Guzman, chief of UNFPA’s population and development branch. “Without reliable data, development planning takes place in a vacuum. For countries in transition, like Afghanistan, there are great risks, but also great opportunities. Knowing the nature and changes in the population helps to minimize those risks and maximize the opportunities.” 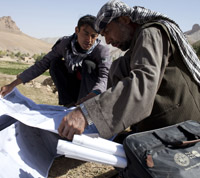 Mapping is one of the crucial steps in the process. Photo: Lorenzo Tugnoli

The SDES project was launched on 3 August 2011 in Bamiyan starting off with the mapping and listing of the area.

“We go to a village that has been assigned to us and start meeting the elders in the village. With the help of the community elders we familiarize ourselves with the village and start with sketching the area and assigning number to each of the establishment, institution, and house,” said Atiqullah, one of the CSO’s cartographers who prepared sketch maps for each enumeration area.

The mapping process is one of the first and most critical phases of the survey. Maps guide the enumerators on the coverage of their assigned area so that they know the correct boundary of their assignment, and thus avoid duplication or missing out some households.

Once the cartographers had prepared the maps, the enumerators were equipped to start their work. Over 500 residents from all six districts and the provincial centre of Bamiyan province were recruited as surveyors and supervisors for the Socio-Demographic and Economic Survey, among them approximately 100 women. The two-week training programme entailed a detailed orientation on the purpose and uses of the Socio-Demographic and Economic Survey in order to equip the surveyors and supervisors to face questions asked by the respondents and community. 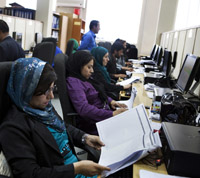 To ensure the quality and credibility of the final data, a third party, independent monitors were hired to verify the coverage of the survey as well as the data editing process. Two data processing centres were established in Bamiyan Centre and Kabul to process the survey forms. Data processing involved manual editing of forms, data entry, and finally cleaning of the final database to ensure a reliable dataset ready for analysis and then dissemination. After a six-month long data processing, results are now ready and available.

The enumeration was physically demanding. As Zia Gul, one of the CSO’s female surveyors remarked, “We walked for three to four hours in mountainous areas to get to a village without knowing if the head of the household will be there or not. If not, we walked there again the next day.”

Afghanistan security situation and the mountainous areas in most part of the country are identified as major difficulties for the roll out of SDES. Another major challenge is getting the community’s endorsement. Without local leaders’ understanding and endorsement, chances of success may be compromised.

The Central Statistics Organization’s long-term partnership with UNFPA has clarified its role as the national agency for collecting, processing, storing, and disseminating credible population data. UNFPA is also working with the Government of Afghanistan to mobilize additional funding. In 2012, thanks to an agreement with the Government of Japan, more than $11 million will be allocated to roll out SDES in Ghor and Daikundi provinces as part of the intended rollout to all 34 provinces by 2014.

“UNFPA is very pleased to see the completion of the first Socio-demographic and Economic Survey and stands close the Central Statistics Organization of Afghanistan in conducting SDES in all provinces to make such data available for the country’s sustainable development,” said Dr. Laurent Zessler, UNFPA Afghanistan Representative.

Girls in Afghanistan want to go back to school

“Giving up is not an option”: Hope for Afghans forced out of school