WASHINGTON, D.C. -- There is a renewed emphasis on condoms during the International AIDS Conference this week as a campaign promoting their use and availability has been re-launched during the event, with the distribution of 850,000 condoms. The CONDOMIZE! campaign, complete with a rap video, t-shirts, and colourful promotional materials, aims to highlight the effectiveness of this prevention commodity, especially among young people who are most vulnerable to the epidemic.

The campaign calls on governments, donors and users to intensify access to, and demand for, quality condoms as a primary defence against HIV. It also calls for investing additional resources and materials into promoting condom use as the most efficient and available prevention technology in the global AIDS response. Challenging the stigma that still often surrounds condoms is also a key strategy. 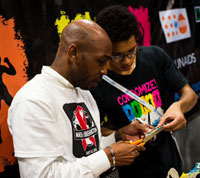 The initiative is a partnership between UNFPA and The Condom Project, in collaboration with Bahamas Red Cross; DKT International, a social marketing NGO; Durex, the Female Health Company, the International AIDS Society and UNAIDS. It was born during the 2010 International AIDS Conference in Vienna.

During his opening speech at the conference, UNAIDS Executive Director Michel Sidibe gave the campaign a considerable boost as he championed the importance of condoms. “And let us not forget that the condom remains the cheapest and most effective weapon we have to stop the spread of HIV,” he said. “It is time for all of us to condomize!”

Bidia Deperthes, UNFPA’s Senior HIV Technical Advisor, says that “we know that sexual transmission accounts for more than 80 per cent of new HIV infections worldwide. If we decrease unprotected sex, we could reduce HIV incidence.” She adds, “If you feel at risk, there is a simple solution to make sex less risky – use condoms!”

In addition to mass condom distribution, rap music with short videos has been created, using key messages from senior international leaders about the importance of condom use. These messages are being broadcast on TV screens throughout the conference.

Franck DeRose, Executive Director of the Condom Project and Global Coordinator of the CONDOMIZE! campaign, says “In a modern and exciting way, we are helping people understand very serious issues and the need to promote condom use. We must ensure that those who need condoms can access them when they need them and where they feel most comfortable -and the awareness campaign at AIDS 2012 is one step towards making this happen.”

There is a considerable shortfall in condoms in a number of countries. For example, in 2011 in sub-Saharan Africa, there were only nine condoms available per man per year, and only one female condom for every 10 women. These condoms were mostly provided by donors as most low- and middle-income countries do not have a budget line for condom procurement.

According to UNFPA, more support and funding are needed from governments themselves to increase the availability of male and female condoms. They should create awareness initiatives and encourage people to use condoms for HIV prevention.

The social marketing of these commodities, which supplies billions of condoms a year, is highlighted by the involvement of DKT International, whose President Philip Harvey says he wants to make condoms as “attractive and convenient to buy as Coca-Cola”. He added: “The people we serve are buying affordable and attractively packaged contraceptives and using them. I believe their lives are substantially improved and more pleasurable as a result."

Durex welcomes the chance to be involved in such an awareness-raising intervention. Charles Shepherd, the company’s Head of Health Promotion comments: “We are delighted to help, not only by donating half a million condoms for the CONDOMIZE! programme at AIDS 2012, but also engaging with the educational sessions.”

Organizers say there has already been a great deal of interest shown with many conference participants urging them to roll out the campaign at country level.