KOLA TEMBEIN, Tigray Region, Ethiopia – Earlier this year, Haderu Gebray, 15, and her parents were arrested for planning her wedding to an older man she had never met.

Ms. Gebray's plight hit the media headlines instantly in Ethiopia, where child marriage is illegal. All it took to create a huge public outcry on her behalf was a post on Facebook from a young man in her area, a district with strong popular opposition to the harmful practice and widespread awareness of the legal consequences of marrying before turning 18.

Ms. Gebray had never set eyes on her would-be husband. All the arrangements were made between him and her parents.

The wedding preparations were in full swing when a member of the community wrote about them on Facebook. The police got wind of the preparations and arrested Ms. Gebray’s parents, her would-be husband and his parents. She was also incarcerated for "protection purposes," as she puts it, and together with her parents was released on bail a short while later. They agreed to cancel the wedding.

“At the time I was not happy that the marriage was [cancelled] as so much effort and expense was [spent] by my parents in organizing the wedding,” she said. Ms. Gebray had resigned herself to her fate and planned to continue her education, although child brides are very likely to drop out of school.

Ms. Gebray's case underscores the importance of the UNFPA-UNICEF Joint Global Programme to Accelerate Action to End Child Marriage. Kola Tembein is one of the three districts in Ethiopia’s Tigray Region where the Joint Global Programme is being implemented. Despite public awareness and opposition, child marriage is a deeply rooted custom that extends even to government employees like Ms. Gebray’s father, whose actions undermine national efforts to end the practice.

Parents such as Ms. Gebray’s often worry that their daughters may engage in premarital sex and tarnish their family’s honour by losing their virginity prior to marriage. Minors pay the price and are left vulnerable to the heightened risk of abuse and health problems —  including potentially fatal complications of pregnancy —  that comes with child marriage.

In Ethiopia, the minimum legal age to marry is 18. Yet the median age at first marriage is 17.1, and 58 per cent of women aged 25 to 49 were child brides, according to the 2016 Ethiopian Demographic and Health Survey. In 2014, the government embarked on an ambitious campaign to eliminate child marriage and other harmful practices by 2025.

The Global Joint Programme is supporting regional government efforts to end child marriage in Tigray. Such efforts are carried out at the grassroots level by community structures including civil society and faith-based organizations like the Guya Mariam Church.

Gebreegziabher Tiku, a local priest, asks couples who wish to marry to produce documents proving that they are not underage. He also preaches to his flock about the consequences of child marriage and other harmful practices.

“We are seeing very good results as far as warding off child marriage is concerned,” the priest said.

Another important partner in the fight against child marriage in Tigray are the Women Development Groups, which conduct community mapping exercises and step up their work during the months prior to popular wedding seasons. Members keep track of every girl in the community, their marriage status and whether or not they are still in school. They then report this information to the District Women’s Affairs Office.

“This has helped us to prevent the marriage of underage girls,” said Leteselas Berhe, the leader of a Women Development Group in Guya, a locality in Kola Tembein District. “We have brought cases of violators to the attention of law enforcement bodies, one of which was the case of [Ms. Gebray].”

Some families reverse their decision when they realize that the Women Development Group is hot on their trail. But cases such as Ms. Gebray’s are usually handled by a Marriage Annulment Committee set up at the local level, and the perpetrators are prosecuted by the courts.

The Tigray Bureau of Women’s Affairs has set up a steering committee to strengthen community efforts at all levels in the fight against child marriage, which is making good yet so far insufficient progress in completely ending this harmful practice in this Ethiopian region.

“We have achieved a lot, but we can’t [yet] say that we have zero incidence of child marriage,” explained Alemat Amare, deputy head of the Bureau.

As for Ms. Gebray, she is free now, but the ordeal left her shaken.

While she was unhappy about her personal situation publicized on social media, Ms. Gebray now believes it was a good strategy that others engaged in the fight against child marriage can learn from. Currently in sixth grade, she enjoys school and wants to continue her education until the day comes when she freely decides to marry.

11 October is the International Day of the Girl Child, which recognizes girls’ rights and the unique challenges facing girls around the world. The 2019 theme is “GirlForce: Unscripted and unstoppable,” which celebrates achievements by, with and for girls since the adoption of the 1995 Beijing Declaration and Platform for Action on Women. 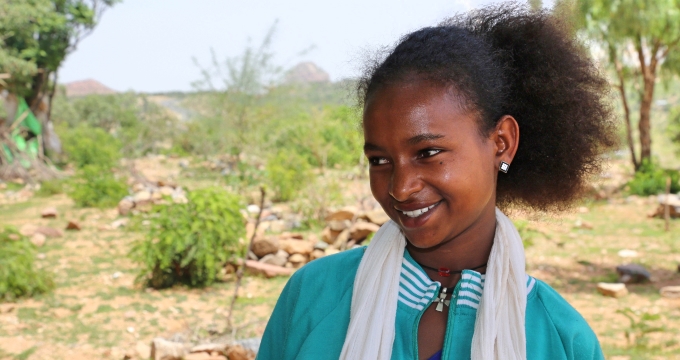