FREETOWN, Sierra Leone - In May, Sierra Leone detected its first-ever case of Ebola, the deadly and contagious haemorrhagic disease. By the end of July, the country had surpassed neighbouring Guinea, where the break was first reported, in number of positive cases.

The outbreak has spread rapidly through four West African countries - Guinea, Liberia, Nigeria and Sierra Leone - sickening at least 1,779 people and killing 961, according to 6 August estimates from the World Health Organization (WHO).

The fatality rate of Ebola can reach up to 90 per cent , though it has been lower in this outbreak. In Sierra Leone, there have been 631 confirmed cases, with 38 probable cases and 48 additional cases suspected. Some 298 people have died. 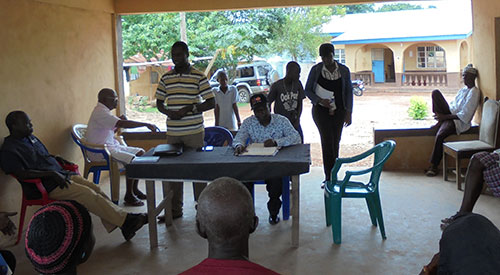 The outbreak has prompted President Ernest Bai Koroma to declare a state of emergency in the country. Ebola is not the only concern - people are reportedly rejecting medical attention out of fear.

“The people are being threatened by two factors,” Mr. Kamara said, “the disease and the fear factor."

To contain the disease, the Government, with support from UNFPA and other partners, has been implementing responses at the community level.

UNFPA and the Government have initiated ‘contact tracing’– a method of tracking contacts, or people linked to confirmed or probable Ebola cases – in Kailahun District. Kailahun is the epicentre of the country’s outbreak and the most affect district.
By tracing contacts and monitoring their health, public health officials can track the movement of the outbreak. This also helps ensure early detection of infections and immediate treatment, and will hopefully stem the spread of the virus.
The model has been adopted and is being used in other districts by UNFPA and the Government.

UNFPA, along with WHO and the Ministry of Health and Sanitation, have trained 300 health workers to serve as contact tracers.

The tracers go door-to-door to learn about people who might be affected, then follow up with each possible contact. Those exhibiting symptoms of Ebola, which include fever, diarrhoea and vomiting, are closely monitored.

The health workers are also trained to protect themselves from the virus.

The collected data is sent to the District Surveillance Officer and the Government-managed District Ebola Task Force.

The contact tracers are equipped with mobile phones provided through a partnership between UNFPA and the phone companies Africell and Airtel. Each company donated 150 phones that enable health workers to capture and store information in a database. The information is then relayed to the health ministry.

Cases that show signs of Ebola are brought by ambulance teams to a centre where blood samples are collected for laboratory confirmation. Lab-confirmed cases are referred to case management centres in Kailahun and Kenema.

Deaths linked to Ebola are transported for safe burial within 24 hours.

Between 1 and 21 July, 2,458 contacts were listed as possible Ebola cases. Of these, 13 per cent were screened and eliminated as potential infections. The remaining 2,133 contacts were monitored. Of these 3.5 per cent showed symptoms of Ebola.