DOHUK, Iraq – “I was only 12 years old when I got married to my 25-year-old cousin,” Najma*, from a Syria, told UNFPA recently.

“My mother entered my room at around 5 pm while I was sitting on the floor, colouring in my princess colouring book. She sat on the bed and called me up. ‘Najma, tomorrow you will get married.’”

Najma’s mother explained what marriage meant. “’You have some duties, and the most important one is to please your husband, prepare his meals, clean and iron his clothes and be an obedient woman,’” she recalled her mother saying.

Najma, now 31, says the marriage was motivated by tradition, and also the family’s financial circumstances. “They told me that he would provide financial support to my siblings and my parents, and that this was the tradition there in Qamishli, Syria,” she explained.

As a child bride, she began to experience the agony of unwanted intimacy, as well as verbal abuse and physical violence.

“I was never free. I was scared all the time because he would not let me do anything and would always decide what should be done in our life,” she said.

“He did not let me go to school and imprisoned me in the house. The most painful, though, were the insults and accusations of being a bad mother. I was doing my best, but I was a child raising another child,” she said.

By the time she was 25, Najma had seven children.

“I love all my children,” she said. “However, in 13 years of marriage, I had seven deliveries, three of which were in the first five years. It was exhausting.”

Running for their lives

Things got even worse when the conflict in Syria intensified in 2015, forcing her to flee, along with her children, husband and parents.

They sought refuge in Domiz 2 camp, in the Kurdistan Region of Iraq. The camp is home to over 10,000 Syrian refugees.

Najma’s husband did not work, so Najma decided to look for a job. “My children’s needs were increasing,” she explained. “It was also a way for me to escape the abuse that did not stop even in displacement.”

With help from a humanitarian organization, she was able to grow vegetables to sell at the nearby market. But being the family’s breadwinner was not enough to earn the respect of her husband.

Najma learned he was having affairs with other women. “When I confronted him, he started beating me and repeating to me that I was an old witch now and he wanted young women.”

Finally, she gathered the courage to leave, taking her children with her to her parents’ home.

It was then Najma learned about a women’s centre in the camp.

The centre, supported by UNFPA with funding from the Kingdom of Norway and the Swedish International Development Cooperation Agency, offers a range of psychosocial services, including counselling, as well as classes and referrals to health and legal support.

It is one of 108 women’s centres UNFPA supports in Iraq. Because gender-based violence increases during humanitarian emergencies, these centres provide information about women’s rights, human rights, how to identify abuse and how to receive help.

Najma was one of those women.

Rising from the ashes

“We noticed Najma’s strength the moment she joined our centre. Her determination to take control over her life was obvious to all,” said the social worker in charge of her case.

“She came to me the first day, and explained that her husband was abusing her and cheating on her, that she didn’t want sympathy but wanted our help her stand on her feet and build the life that was taken from her at the age of 12.”

Najma was referred to a legal office that helped her obtain a divorce.

“He stole my childhood, but I gained my youth,” Najma said. “I am 31, strong, determined to make the best of every day and provide a good life to my children. I have a chance, and I will not waste it.”

Today, is works from home as a tailor, and also teaches sewing courses to women at the centre.

She also encourages other survivors to speak up and get help.

“I want to help women who are survivors of domestic violence and want to help give them a chance to start again, to rise from the ashes, just like I did,” she said. 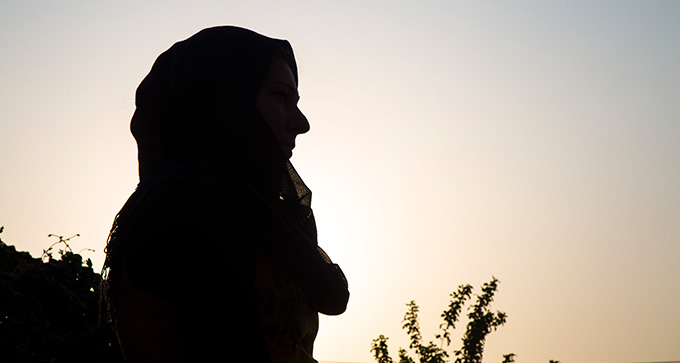