ABIDJAN, Cote d’Ivoire — In the aftermath of post-election violence here, almost 18 thousand people -- 70 per cent of them women, children and older persons – have been temporarily re-settled in the Western part of the country, fleeing from clashes between communities in the city of Duékoué. Another 30,000 have fled to Liberia. UNFPA, working as part of a humanitarian response team, has been paying particular attention to the reproductive health needs of women in the camps for internally displaced persons and protecting them against gender-based violence.

In the wake of the crisis, and in the absence of supplies, maternal and newborn mortality and morbidity increased, according to the local health authorities. “We had to run here and there to perform a childbirth or a Caesarean section and there were no drugs available,” said Dr. Moïse Tetchi, gynaecologist at the General Hospital of Duékoué, recalling the situation in the early stages of the crises. 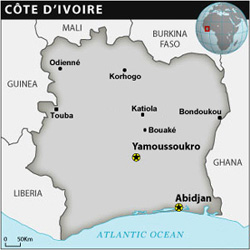 Action has now been taken with the help of various pre-packaged kits that contain essential drugs, supplies and equipment provided by UNFPA to quickly set up reproductive health services during the early phase of a crisis. They include supplies to deal with obstetric complications and management of rape, as well as male and female condoms and equipment for blood transfusions.

These products were conveyed to various sites in the Western part of the country (Duékoué, Danané, Daloa and Lakota) with the assistance of the Public Health Pharmacy, under the supervision of the Humanitarian Action Unit of the UNFPA Country Office. When they were handed over in to health workers in the presence of the local UN Humanitarian Coordinator/Resident Coordinator, Mr. Ndolamb Ngokwey, he said: “In crisis situations, the most vulnerable groups are the women, in particular the pregnant women. Our cry from the heart is to bring assistance to them in reproductive health as quickly as possible. That is why I am giving you this important batch of the reproductive health emergency kits provided by UNFPA.”

Thanks to the commodities provided by UNFPA to Danané, Duékoué and Man, it is now possible to manage 200 childbirths under acceptable hygienic conditions, assist 100 women and 20 children victims of sexual violence, ensure post-exposure prophylaxis for 120 adults and 32 children who have been exposed to HIV, manage 600 deliveries in medical settings including 180 cases requiring sutures of cervix and vaginal tears, and to carry out 140 Caesarean sections.