Born at the end of a rope: Embracing indigenous childbirth traditions to save lives

CHURCAMPA, Peru – Edelmira Martina Antay Dávila remembers when women used to die in childbirth. “I used to give birth at home, but it was not good,” she told UNFPA. “Women can die, even from haemorrhages.”

Ms. Antay lives in Churcampa, a remote, mountainous province that towers 2,000 metres above sea level. The community is largely indigenous.

Twenty years ago, eight out of 10 women in Churcampa gave birth at home, with help only from relatives or unskilled birth attendants. Those who did seek professional care often found health facilities unable to handle serious complications.

But things are different now. Today, 95 per cent of deliveries in the province take place at the Churcampa Health Centre, and maternal health has greatly improved.

“I have five children: Elizabeth, Edgar, Dayana, Edú and Sauri,” Ms. Antay said. “The first ones I gave birth to at my home, but now I give birth at the Churcampa Health Centre.”

Much of the change is thanks to a deliberate effort by health officials to respect the childbirth traditions and culture of local women.

Throughout Latin America and the Caribbean, approximately 1 million women give birth outside health facilities each year, leaving them vulnerable to complications. Approximately 7,300 women die of pregnancy-related causes annually.

But Peru has made remarkable progress in saving mothers' lives. Between 1990 and 2015, the country saw a nearly 73 per cent reduction in the maternal death ratio. Efforts to encourage women to deliver in well-equipped, professionally staffed health facilities have played a key role in this progress.

And to do that, rural health systems have had to embrace something they once ignored: folk traditions and practices.

It started about a decade ago in the regions of Huancavelica – where Churcampa is located – and Ayacucho. There, UNFPA and the organization Medicus Mundi Navarra facilitated dialogues between health authorities and the local community to learn why so few indigenous women were receiving care at clinics.

Health officials learned that indigenous women wanted to be able to speak their native language, Quechua, while getting care. They wanted to be accompanied by family members during delivery, and many preferred certain traditional medicines, such as herbs to manage nausea.

Many women also wanted to give birth vertically, with the assistance of a rope hanging from the ceiling, rather than on a horizontal delivery bed.

Embracing the culture and community

“Thanks to culturally sensitive maternal health care, we are seeing a decline in neonatal and maternal morbidity and mortality in our communities and health centres,” said Miriam Gutiérrez Castro, an obstetrician from the Vilcashuamán health centre in Ayacucho.

Churcampa authorities say they have also seen increased demand for maternal and neonatal health services, as well as higher levels of satisfaction.

“Now we like to come to the Churcampa Health Centre because they treat us like we are at our home, and [we can deliver] with the rope, and the way we like to be treated,” Ms. Antay told UNFPA. “Our husbands also participate, and when they are not there, our families support us, just as we like it.”

Still, maternal mortality rates among indigenous women remain higher than those among the broader population, and most of these deaths are due to preventable causes.

Efforts to reach both local communities and health providers must continue. Last year, for instance, UNFPA helped health workers from Ayacucho visit their peers in Churcampa to exchange good practices and knowledge.

And women are also encouraging their peers to receive health services.

“I feel good because I am treated well and with affection,” said Ms. Antay at the clinic in Churcampa. “That is the way we like it, and that is why I would like other women to come here to receive care.” 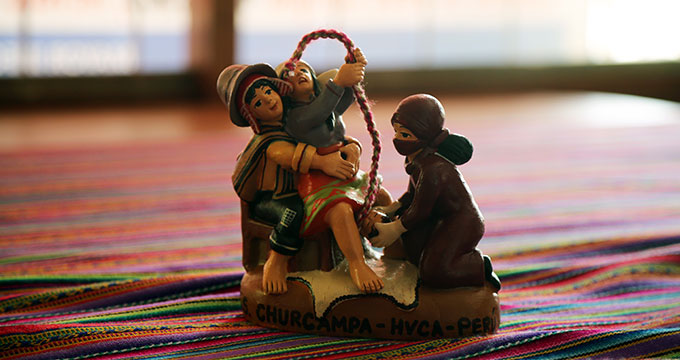 Born at the end of a rope: Embracing indigenous childbirth traditions to save lives