Avoiding and Mitigating the Health Consequences of FGM/C in Ethiopia

AFAR REGION, Ethiopia — Ten-year-old Sadiya Abubakar had suffered for a long time.  What should be a natural regular function – urination– had become an ordeal for her.

Sadiya was infibulated when she was just seven days old.  Infibulation, the most severe form of female genital mutilation/cutting (FGM/C), involves the entire removal of the clitoris, the labia minora and labia majora, followed by the stitching or sealing of the wound, leaving only a small hole for the passage of urine and menses. Under the circumstances, sexual debut is a painful occasion that often requires tearing the remaining tissue.

The procedure is usually performed on girls between the ages of seven to nine. But in some districts of the Afar Region, like the one which Sadiya comes from, it is carried out within the first few days after birth. The practice often leaves the babies with severe pain and trauma, shock, haemorrhage, sepsis, urine retention, ulceration of the genital region, and urinary infection, among other complications.

Sadiya was used to passing urine drip by drip. But recently a swelling occurred around the small hole that interrupted even the limited flow. She made the long trip with her mother to the Barbra May Maternity Hospital in Mille seeking help. Her infibulation was opened and a cyst was removed so that she can now urinate normally.

The hospital was established in September 2011 and is run by the Afar Pastoralist Development Association (APDA) –  the  local partner in the implementation of the UNFPA/UNICEF Joint Programme on the Accelerated Reduction of FGM/C. In addition to more routine obstetric services, the hospital treats conditions like Sadiya's, and addresses many other medical conditions related to FGM/C. 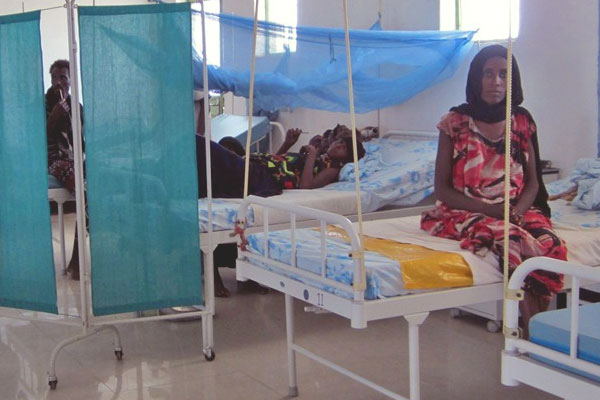 The medical director of the hospital, Dr. Shimeles Fantu, who operated on Sadiya, says the small hospital treats up to 50 cases of  urinary and obstetric complications related to FGM/C every week. Almost all of the girls and women who come seeking the service are survivors of the harmful procedure. Though the hospital is intended to serve in a radius of 250 km, patients like Sadiya are coming from farther away for the specialized services it provides.

One of the major interventions of the Joint Programme is strengthening the role of public health services in preventing FGM/C and, wherever possible, in mitigating its negative effects on girls' and women's health. Medical personnel and health workers in the programme's intervention areas have been trained to identify the negative consequences of FGM/C and, in many cases, treat medical complications arising from it.

According to the 2011 Annual Report on the Joint Programme , 43 medical professionals and scores of women extension workers have been trained and are working full time under the Joint Programme to integrate care for complications related to genital cutting into reproductive health services  in several districts in the Afar Region. The Barbra May Maternity Hospital in Mille, one health centre and three health posts now include FGM/C interventions as part of their maternal and child health services.

Approaching the FGM/C issue from the health angle – by drawing connections between the practice and excessive mortality, complications of childbearing and trauma —  has been found to be an effective entry point to changing community attitudes. FGM/C now forms part of the health education given at schools in the region every month by the health extension workers -- community health workers deployed by the government in rural areas. The issue of FGM/C has also become one of the topics these health workers discuss when they go house-to-house to provide services. This is especially a very pragmatic approach in the Afar Region where the pastoralists need to move often search of food and water for their animals.

In areas where there are no government-supported health extension workers, APDA has trained and deployed women --  chosen from their respective communities -- to provide outreach and promote messages about safe motherhood and the dangers of some traditional practices.

The Afar region, one of the hottest and driest places on earth, ranks second in the prevalence of FGM/C in Ethiopia after the Somali Region, with prevalence rates of 91.6 and 97 per cent, respectively, according to the Demographic and Health Survey conducted in 2005. But thanks to the engagement of the region's political leadership, including the Regional President himself, involvement of religious leaders and community elders, and participation of the community at the grassroots level, abandonment of FGM/C is taking place among the younger generation.

According to Zahra Humed, Head of the Afar Region Bureau of Women, Children and Youth Affairs, the prevalence of the practice has gone down to 58 per cent over the last couple of years. Five of the six districts of Zone 3 of the Region where the Joint Programme operates have publicly declared collective abandonment of the practice. Furthermore, data collected from sub-district and community level shows that the number of uncut girls in the six districts has passed the 7,000 mark since the start of the Joint Programme.  Parents of those girls often express their happiness that they are raising children free from the consequences and complications of FGM/C.

Nevertheless, in spite of the impressive effort to create an FGM/C-free generation in the Afar Region, far too many FGM/C survivor girls and women like Sadiya continue to suffer the serious medical complications of the practice. At the same time, a recognition that those health consequences are related to genital cutting is encouraging communities to move towards abandonment of the practice. Sadiya's mother who saw the extreme suffering of her daughter says she is thankful to Allah that her daughter is doing ok now and vows she will never again subject a girl to the ordeal of FGM/C.