PORT AU PRINCE, Haiti – “In the past, I was really afraid because of COVID-19,” Frantzia Noël told UNFPA. She is 35 years old and 4 months pregnant, living in north-western Haiti.

Fear of the virus has discouraged many women from seeking maternal health care. Some maternity facilities have reported as much as a 25 per cent decline in patients. Health officials warn that complications of pregnancy and maternal injury or death could rise as a result.

UNFPA is working with health workers and partners to ensure safe access to maternal health services, and to encourage pregnant women to continue receiving care.

“My fear has gradually disappeared after talking to a midwife who came to my neighbourhood to show me how to adopt prevention measures before coming to the hospital,” Ms. Noël explained.

But fear is not the only threat to women’s access to health care. The spread of COVID-19 has also strained health systems, leaving many health workers unprotected and even forcing some facilities to close for decontamination.

At the Immaculée Conception Hospital of Port-de-Paix, for instance, emergency services were suspended for 27 days after one patient and two health providers tested positive for the virus.

Haiti already had the highest maternal mortality rate in Latin America and Caribbean, with some 480 women dying per 100,000 live births, according to UN reports. Even before the outbreak of the pandemic, only 42 per cent of births were attended by skilled health personnel.

Now, the situation could be worsening.

Haiti has seen more than 8,000 cases of COVID-19, and hundreds of deaths from the virus, according to the World Health Organization. Increased exposure to the disease, lack of sufficient personal protective equipment (PPE) and accumulating stress are all taking a toll on health personnel.

At Saint-Antoine Hospital of Jérémie, in Grand’Anse, health workers’ attendance rates declined as staff suffered burn out and anxiety, in part over lack of protective equipment.

“We organized meeting points with two or three women to respect the physical distance in their communities so they are encouraged to come to the hospital,” Christiane Bernard, midwife-nurse in the Saint-Joseph Healthcare of Abricots, and Beatrice Lotin, nurse-midwife in charge at the Healthcare of Arniquet, reported to UNFPA.

UNFPA also worked with the Ministry of the Status of Women and Women’s Rights to implement an action plan against COVID-19. The action plan included awareness raising about the pandemic, its impact on women and girls, and how to prevent its spread.

By late July, at 19 town hall meetings, UNFPA and partners had distributed 2,300 buckets with taps to help with handwashing, 500 hygiene kits containing soap and other supplies, and dry take-home rations kits to help families cope with increased economic hardship. Thousands of face masks were also distributed.

“It has been with a great feeling of relief that we have welcomed the delivery of this batch of personal protection equipment,” said Dr. Saely Polycarpe, the medical director of Immaculée Conception Hospital.

This work is ongoing.

UNFPA is now working with the Central Emergency Response Fund to distribute $70,000 worth of drugs and hand-washing supplies, as well as solar lights for women’s safe spaces. UNFPA is also channelling more than $100,000 of reproductive health support to the Nippes Department. 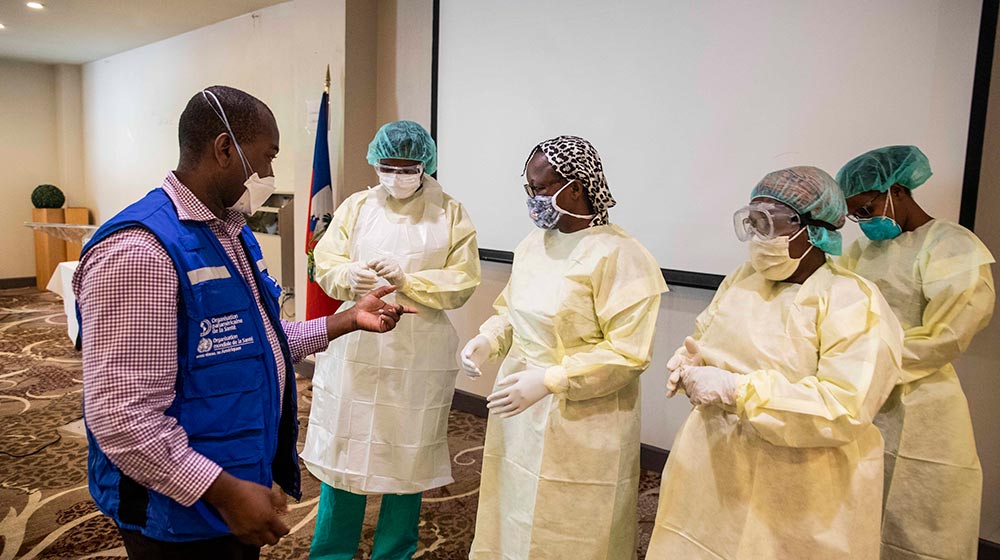 2021: A look back at a year of assistance amidst adversity