CARACAS, Venezuela – The economic and political crisis in Venezuela has led around 4.2 million people to exit the country in the last three years. Those left behind – especially people living in the interior of the country – have seen the near shutdown of many public services, including sexual and reproductive health care and services addressing gender-based violence.

The unmet need for contraceptives is estimated at 80 per cent, despite efforts by UNFPA, the government and local organizations to stock primary care clinics throughout Venezuela. And pregnant women often can't get the care they need due to low supplies of drugs, overcrowded facilities and power outages.

All of these issues are severely compounded by a critical shortage of health workers, particularly those trained in sexual and reproductive health issues.

To help fill these gaps, UNFPA is supporting workshops to train health workers on sexual and reproductive health issues and how to address gender-based violence. These skills make a world of difference to patients, said José Gregorio Cuenza, a health official in Paez, a municipality in Venezuela’s Apure State.

"When health workers build and update their capacities, those who benefit the most are the people living in nearby communities," Mr. Cuenza told UNFPA. "Now they get not only basic services but also proper guidance on how to deal with taboo issues such as sexual and reproductive health, sexual abuse and gender-based violence."

These skills, he explained, enable health workers to better identify cases of violence and provide guidance to ensure survivors are able to get the supportive care they need.

"I wish the workshops were scheduled more often. Every day we examine many abused women, most of them young. It is crucial to build the capacity of health workers in clinics so they can serve victims' needs," noted Luz Marina Alejo, a medical examiner from Apure.

So far, 135 health workers have received specific training on gender-based violence and dealing with sexually transmitted diseases, including HIV. A further 144 personnel from the public sector and local NGOs have taken part in the workshops on gender-based violence, covering 3,500 inhabitants of small communities along the borders with Brazil and Colombia.

Dignity kits a game-changer for women

UNFPA is also supporting efforts by the government and local groups to raise awareness about gender-based violence. Many migrant women and girls fear sexual violence and exploitation as they travel great distances, often alone, from the interior to neighbouring countries like Colombia.

Information about where to find help is being disseminated in community centres, local markets and public transport hubs in Venezuela, where women and girl migrants are especially vulnerable. The campaign, coordinated by the Central Emergency Response Fund, aims to prevent and combat gender-based violence in the Apure, Bolivar, Tachira and Zulia border regions.

The campaign is also distributing 10,000 dignity kits, which contain essential hygiene supplies such as soap and menstrual products, in areas such as Guanamo, a small mining town in southeastern Bolivar State where women have struggled to find feminine hygiene products since Venezuela's crisis erupted in 2015.

Martha, 35, said that the kits have been a game-changer.

"You don't know how hard it is for women to work in the mine,” she said. “It's very difficult to get access to sanitary products in a place like this, where you often work in waist-deep water."

UNFPA, with partners including the UN Refugee Agency and UNICEF, is additionally working with the government to bolster the implementation of a law defending women’s right to a life free of violence. These UN agencies are also helping to establish a network of space spaces for survivors to access psychosocial treatment and legal assistance.

For Dr. Leonardo de Abreu, an obstetrician and gynaecologist who is coordinating health capacity-building programme in Miranda State, the next step should be expanding the reach of these efforts, in particular to address the rise in sexually transmitted diseases.

"The humanitarian crisis hit us hard. Talking about it is not the same as living it," he said.

"But,” Dr. Abreu added, “it made us more flexible and resourceful.” At the end of the day, he explained, "we have adapted to the people in our communities, and we stayed behind to work for Venezuela because we need to go beyond just hope – and act." 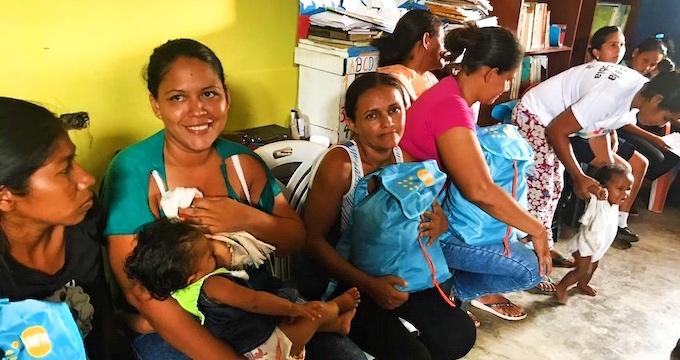 Pregnant in a city under siege: Yemeni refugees find safety and maternal…