KONYA, Turkey – Salimeh was nervous about fleeing from Afghanistan to Turkey as a refugee, but her husband insisted life would be better. They would be safer. They would rise out of poverty. He had no way of knowing she would have to create that new life for herself – without him.

“First, I did not want to leave my family and country behind, but my husband convinced me,” she said.

He resettled first, in the city of Konya. He found work in construction, and a year later was able to pay for Salimeh and their three children to join him.

The adjustment was challenging, but promising. The children started school, and Salimeh had a fourth child. She became pregnant again.

Then her husband suddenly died in a construction accident. Soon after, she had a miscarriage.

“I was lost for a long time,” she told UNFPA recently, tearing up as she recalled the losses. “I wished I was dead too. I lost the baby because of that unbearable misery.”

Salimeh and her children moved in with her brother, who also lived in Turkey. He was working, but his income did not stretch enough to cover their basic needs.

To make matters even more challenging, Salimeh, whose native tongue is Turkmen, had never learned to read or write in any language. This left her dependent on her brother for everything from navigating street signs to grocery shopping.

But then, five months after her husband’s death, there was a knock at the door. Outreach workers from the nearby Konya Meram Social Service Centre came by to offer support, part of their regular visits to refugee communities.

They told her about a project designed to improve access of the most vulnerable refugees to social services in Turkey. The project – funded by European Union’s Humanitarian Aid and implemented by UNFPA and the Ministry of Family, Labour and Social Services in Turkey – offers legal counselling, psychological support, Turkish language courses, awareness trainings and social events.

Salime attended an orientation session for refugees. “They gave us paper and pencil and asked us to write down how we felt and what we had gone through as a refugee in Turkey. I said that I was illiterate. They asked me to draw and, again, I said I couldn't because I had never held a pencil before,” she recalled.

“I looked around and many other women from Syria, Afghanistan, Iraq were able to write something. I was very embarrassed because I was the only one who did not know how to write. They asked me if I wanted to learn how to read and write. I replied, ‘Maybe.’ But I was very scared that I wouldn’t be able to do it.”

The world opens up

Salimeh began seeing a case worker and a psychologist in the centre. They helped her make a plan to stand on her own two feet. They referred her to financial assistance, which helped her move into a new home. Through courses at the centre, she learned about her legal rights and her children developed new skills. They all made friends.

And Salimeh learned to read and write.

“Learning how to read and write has changed my life. I have self-confidence now. I know the price of what I'm buying at the grocery store. I can go to the doctor. I used to feel blinded, scared to go out, but now I have a way different life,” she said.

Today, her children are thriving in school, and Salimeh is looking for a job.

Continuing amid the pandemic

The project improves access of the most vulnerable refugees to social services in Turkey. It has reached thousands of people in need, and under temporary and international protection, since it was launched in October 2017. It operates in 27 social service centres in 19 provinces.

Support from this programme continues even during the COVID-19 pandemic. Project staff continue to reach out to people in need, providing them with information not only about services and support, but also about infection prevention measures and health care. Individual consulting and psychosocial services continue to take place online and by phone. 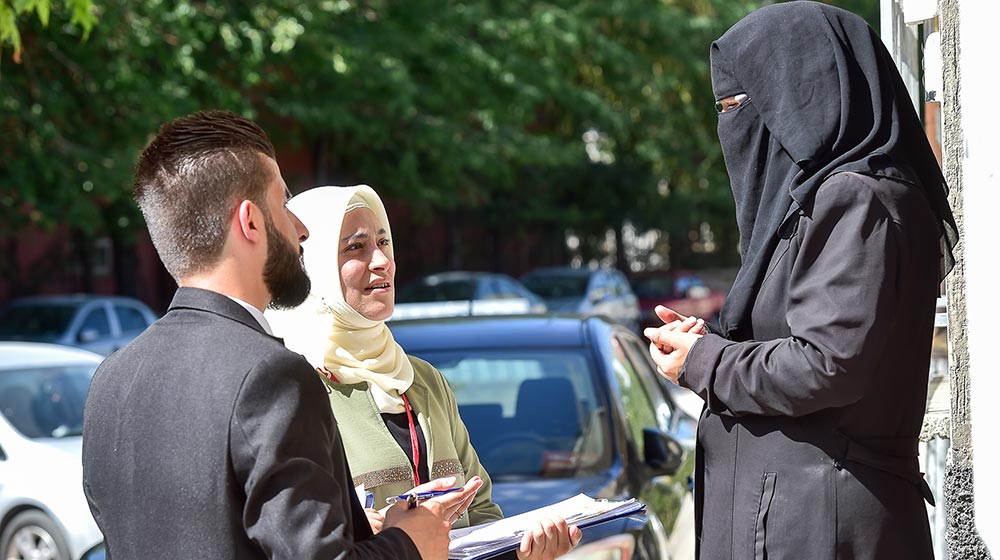