After marriage at age 9, a former child bride gets a second chance

IBB, Yemen – Shukria was married off at just 9 years old. The wedding was arranged to settle a debt her family owed to a 50-year-old man. “He told my father he would forget the debt and give even more money if he could take me as his bride. So that is how I got married,” Shukria recounted.

From the first days, the marriage was a nightmare. “Three days after the wedding, he had sex with me,” she said. “The whole experience was horrifying; I did not know what was happening to me.”

As her husband’s second wife, she was the same age as some of his children – yet her childhood was over. She was forced to drop out of school to attend to domestic responsibilities. 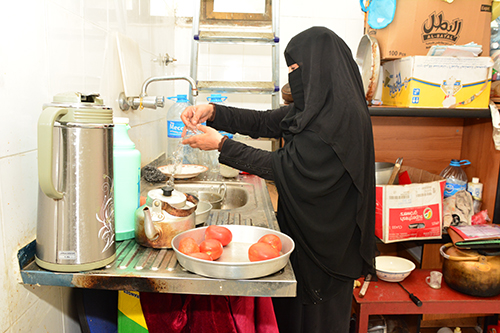 Since being thrown out of their house, Shukria and her children have been crowded into a small rental home. © UNFPA

Over the years, she had 10 children.

Early in her marriage, the family moved to Saudi Arabia. Shukria began to focus on making and selling handicrafts. She took pride in her work, saving money “to help my husband buy a house for us in Yemen.”

Twenty-five years later, they purchased a home in Yemen. But soon after returning from abroad, Shukria’s husband divorced her, remarried, and sold the house.

“I can handle him getting another wife, but what really broke my heart was that he simply sold the house without my knowledge. When I heard this, I felt all my efforts in life had washed away,” she said.

Still, she did not give up. “I sold all my gold and bought the house back. This time, I put the house under my name.”

But she and her children were not safe there.

They were attacked by a gang, and her children got into trouble trying to defend the home. Then her husband and nephew tried to sell the house despite her protests.

Eventually, they succeeded. Shukria and her children were thrown out. 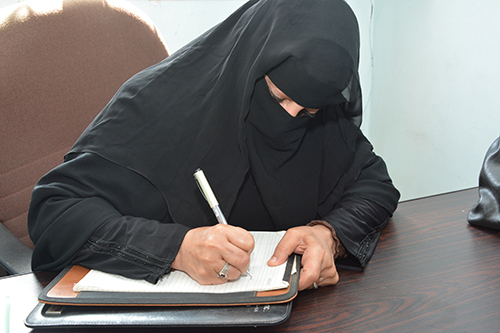 Shukria's efforts to acquire an education have inspired her own children. © UNFPA

“Shukria came to us seeking help for the injustices that she had succumbed to,” said Hayat Al-Kaynaee, head of a women’s centre in Ibb run by the Yemeni Women’s Union, a UNFPA partner.

“Many women like Shurkia in Ibb are denied resources and access to wealth for the mere reason that they are women,” she explained.

Women in Yemen are highly vulnerable, not only to abuses like child marriage, but also to poverty and violence. They have less access than men to medical care, property ownership, credit, education and training.

In 2013, UNFPA and the British Council launched the Springboard programme in Yemen. The programme, already operational in over 30 countries, aims to economically and socially empower vulnerable women. Trainers help women identify their personal and professional goals, then support them in developing the skills needed to achieve those goals.

Now 55, Shukria is completing her second year of university, majoring in Guidance and Psychological Support.

It has not been easy. Her family is crowded into a small rented house. But Shukria is determined. “I am studying law as well,” she said. “I wanted to be a lawyer so I could stand for my case and have my house back.”

The Yemeni Women’s Union has provided tutors to support her studies. “Shukria is a source of pride and inspiration for all of us,” said Ms. Hayat Al-Kaynaee. “It is very rare for a woman in Yemen, at her age, with 10 children, to go back to school. Shukria tells us there are no age limits to do or learn anything.”

And she is inspiring her children as well. “I have not let my daughters to go through the same path,” Shukri said proudly. “They are both in university.”

The conflict in Yemen has made life even more difficult for women and girls. Families are increasingly turning to child marriage to cope with the growing hardships. Violence against women also appears to be escalating.

The Springboard programme initially had to be halted because of the insecurity. But earlier this year, UNFPA and the British Council managed to resume operations, this time focusing on women living in displacement. Grants are being provided to assist vulnerable women with income-generating projects.

As for Shukria, she wants to use her second chance to help other women.

“We are planning to establish a shelter for survivors of gender-based violence in Ibb Governorate, with support from UNFPA,” Ms. Hayat Al-Kaynaee said. “We think that Shukria would be ideal to manage the shelter given all her life experiences and fighting spirit.”

“A drop of a rain can revive the earth,” Shukria said. “I would like to be that drop.” 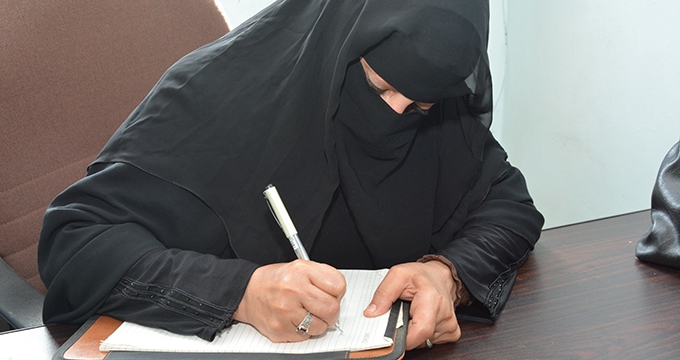 After marriage at age 9, a former child bride gets a second chance