After infertility, isolation and displacement, refugee in Iraq finds a place to heal

DOHUK, Iraq – Thirteen years ago, in Damascus, Syria, Rawa* fell in love. “It was perfect back then,” she said.

She was a 30-year-old kindergarten teacher at the time. Both she and her husband were eager to start a family soon after they married. “It was all I was looking forward to. After all, I love children,” she said.

But life took an unexpected turn. One year later, after a series of doctors’ appointments and tests, they discovered that Rawa was unable to conceive.

The news was bitterly disappointing to Rawa. But it also made her the target of shame and ridicule in their conservative community, where large families are seen as desirable.

“When people find out about my infertility, their facial expressions change. The smile on their face is immediately replaced by an awkward silence that screams, ‘Something is wrong with you’,” Rawa told UNFPA.

Her husband, too, blamed her for their troubles.

He started calling her “less of a woman,” and treating her as a housekeeper rather than a partner. He began having an affair, and even restricted Rawa’s freedom, preventing her from leaving the house.

“I eventually summoned the strength to ask for a divorce, but he refused, again and again,” Rawa said. “I resigned myself to suffer in silence, hoping that one day I would manage to break free.”

The emotional toll was devastating, she said. She even contemplated suicide.

Then war broke out.

“I am far from alone”

In 2011, as violence took hold of Syria, Rawa and her husband were forced to flee Damascus. They eventually made their way to Dohuk, Iraq, seeking shelter in the Gawelan camp – home to more than 8,000 Syrian refugees – in 2013.

Displacement only intensified her depression.

Like many refugees, she and her husband fell into poverty. Unable to find work, they relied on humanitarian assistance for survival.

Then one day, she saw a leaflet outside her tent, encouraging women to visit a nearby women’s social centre – one of 147 women’s centres UNFPA is supporting in Iraqi displacement camps and host communities.

These centres offer a range of services, including referrals to sexual and reproductive health care, livelihood training, social services and counselling.

Rawa decided to give it a chance.

She spoke to social workers about her struggles and isolation. “Infertility can rock your very foundation: your sense of control over your future, your faith in your body, and your feelings about yourself as a woman,” she explained.

“At the centre, the social workers told me that I am not alone – that I may suffer in silence, but I am far from alone.”

UNFPA-supported women’s centres also promote messages about women’s empowerment and gender equality, encouraging women and girls to see themselves as valuable and strong, no matter their circumstances.

“They restored some of the faith I had lost in myself and made me feel that I should not be judged by my ability to procreate,” Rawa explained.

Visitors also learn about gender-based violence, which is not always physical. It can also take forms like psychological violence, such as controlling behaviours and deprivation of liberty.

Finding her place in the world

The social workers provided Rawa with information on infertility, and they encouraged her to attend the centre’s recreational activities and life-skills trainings, helping her find a sense of purpose and community.

They also offered to speak to her husband.

“The centre and social workers not only held my hand when I needed it, but they also reached out to my husband and convinced him to attend the focus group discussions for men and young boys on gender-based violence and women’s rights.”

The sessions have helped.

“My husband has also improved considerably,” Rawa recounted. “His disrespectful statements have stopped and he is slowly embracing the situation with a more compassionate and understanding attitude.”

This kind of support can be life-changing, as Rawa attests.

“They made me feel as if I had a place in the world,” she said.
– Salwa Moussa 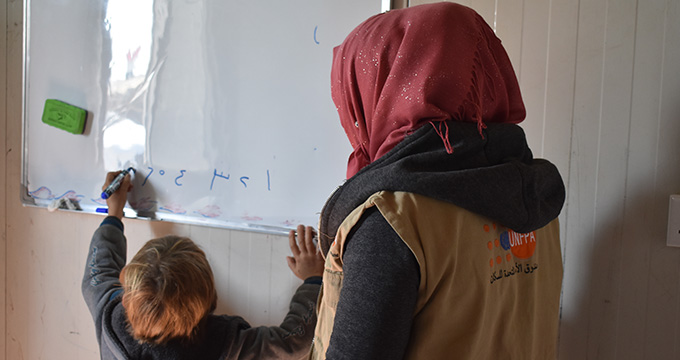 After infertility, isolation and displacement, refugee in Iraq finds a place to heal