TEGUCIGALPA, Honduras – Fabiola Ulloa, 23, gave birth under the bridge where she had taken shelter from a raging hurricane. Six months later, she is still there, with her new baby, partner and 3-year-old son, living in a tent beside the road.

“My sister and I were both pregnant during the storm,” Ms. Ulloa told UNFPA in an interview in her nylon tent earlier this week. “That night was very sad. I didn’t get a chance to get my things out because I had to take care of my mom, my sister and my child.”

Hurricane Eta tore through Honduras at the start of November 2020. Ms. Ulloa’s neighbourhood in Playita, in the city San Pedro Sula, was devastated. Her family, like many others, lost everything.

They crowded into a tent under a concrete bridge, alongside other families. There, they weathered a second hurricane, Iota, which struck two weeks after Eta.

Only days later, Ms. Ulloa went into labour. “I thought my son would be born in January but on 24 November, I started having some pain.”

She was unreachable by ambulance, but the neighbourhood midwife, a woman who had delivered all the babies in her family, was summoned. “At 9 am I was delivering my child here inside of this tent,” Ms. Ulloa said.

Hurricanes and homelessness amid the pandemic

Those two deadly storms affected millions of people throughout the country, and many, like Ms. Ulloa, have not yet recovered.

Today, food security is a major concern, humanitarian groups report, as is the COVID-19 pandemic.

Access to health services was severely disrupted in the aftermath of the storms – more than 400 health facilities were damaged, including 120 that were rendered fully inoperable – but even now, many women and girls are refraining from seeking essential health services out of fear of exposure to COVID-19.

This is one of the reasons Ms. Ullao and her infant son, Joshua Enmanuel, have not sought out care at a health facility. “I didn’t need to go to any hospital,” she told UNFPA. “I didn’t want the ambulance because when I needed it they didn’t come to save me.”

Her newborn has received care from UNFPA, however. “The only doctor who has come is the UNFPA doctor, who came to check the child at two weeks old,” she said. She was able to access additional post-partum care and newborn services at the Chamelecón health center, which has been supported with training by UNFPA.

Rough estimates indicate around 24,000 pregnant women were directly affected by the storms, but health services in the worst-hit areas remain interrupted. In the department of Cortés, for example, most health facilities remain closed due to damage, health personnel injuries and blocked roadways.

UNFPA is working with partner organizations and the government to restore access to life-saving health services, particularly for women in need of prenatal, safe delivery and post-partum care. Together with the Pan American Health Organization, UNFPA is targeting more than half a million people throughout the country with health services; as of late March about a quarter of a million people had been reached.

The safety of vulnerable women and girls also remains a chief concern. In the aftermath of disasters, vulnerability to sexual exploitation and abuse can greatly amid the displacement and disrupted protection systems.

Nearly 13,000 calls to emergency services were reported in the early months of 2021, and some 33 femicides were recorded, according to recent reports.

Finding a way to survive

Since November, the challenges have been extraordinary, storm survivors are reporting.

"This is the second time that I have lost my home due to the floods and it is very difficult for me, in addition to raising seven children as a single mother, to face this double tragedy," said Gabriela at a shelter in Las Brisas in February.

“We need food because there’s no kitchen,” Ms. Ulloa said. “We can’t cook so we have to buy ready-made meals. And also there are a lot of mosquitoes.” The children and families are also at risk along the road. “We are exposed to car accidents,” she said.

Still, she and others are determined to reclaim their lives and futures.

"We lost everything. There is a lot of hopelessness," said Karlibeth Ortega, a young women’s advocate in La Lima, in Cortés. “But we still have to move on and find a way to survive.” 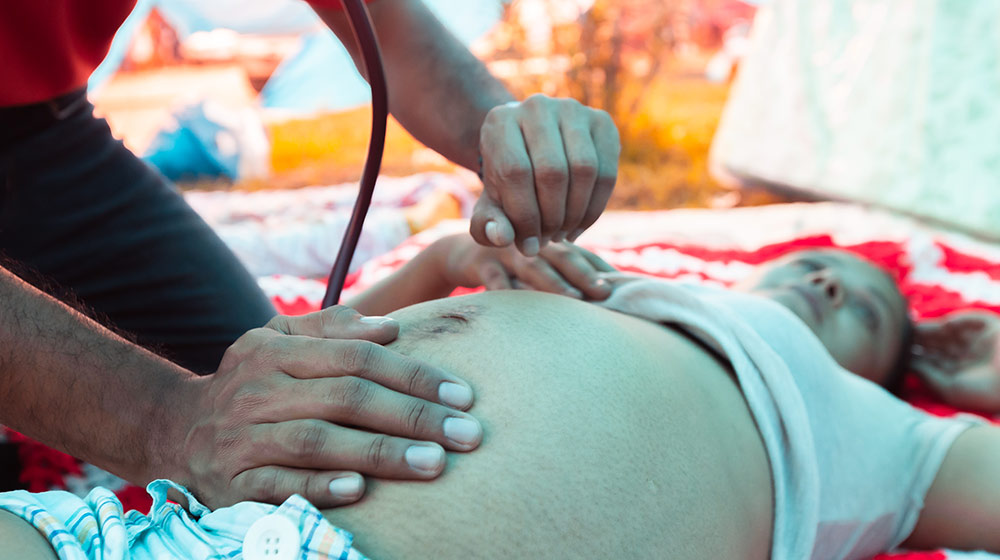