ERBIL, Iraq – When 39-year-old Asma crossed the border from Syria into Iraq, all she could think about was the son she was leaving behind.

“It was the worst day of my life – worse than all the shooting and attacks in Syria,” Asma said, remembering the day she fled her home in Qamishli, Syria, with her husband and four of her five sons.

She had little news about her eldest child – only that he had been released from jail in Syria. She did not know whether he was dead or alive.

“I was terrified,” she said. “It was an indescribable feeling, but I managed because I had to move on for the sake of my children.”

The family walked for three days to reach the border. The slept little, and listened to gunfire as they travelled.

Yet Asma’s trials would not end when she reached Iraq. Only a few months later, she would see another son take up arms, and her shelter would come to seem like a prison.

Asma’s family moved into a tent in Kawergosk camp located near Erbil, in the Kurdistan region of Iraq. While they had escaped the violence back home, they had not escaped their fear. 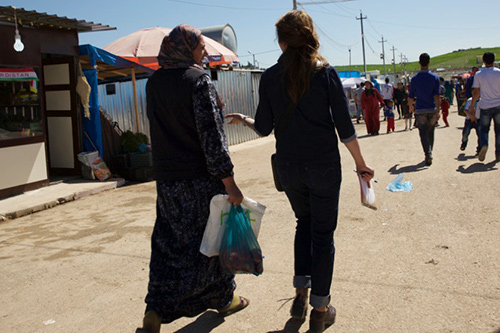 Asma speaks with UNFPA’s Shayda Hessami about her experiences fleeing Syria and living in Kawergosk refugee camp in Iraq. © UNFPA

Asma’s husband had been strict when they lived in Syria, but the stress of displacement made things worse. In Iraq, he would not allow her to even leave their tent.

Soon, her 19-year-old son joined the Kurdistan forces fighting the Islamic State in Iraq and the Levant (ISIL, also known as ISIS).

“I wept day and night,” Asma said. “It is a heart-wrenching experience for a mother to send her two sons to the battle with no glimmer of hope, and no guarantee of their safe return.”

Stuck in the tent, she felt increasingly isolated: “I used to feel lonely, very lonely.”

Standing up for herself

One day, she learned about Al Messala, a UNFPA-supported women’s centre in Erbil, which offers information and courses to Syrian women, including skills training to help women generate an income. The centre is also a safe space for those who have endured hardship, offering psychosocial support, as well as referrals to health and legal services.

“I decided to join the sewing school,” Asma said. “I sought permission from my husband, who initially opposed the idea. I even expected him to shout at me, but when I told him that other Syrian friends and social workers also visit the place, and that it is absolutely safe, he allowed me to go.”

The centre opened up another world to Asma. She joined 17 other women in the three-month class, and quickly formed friendships with people who had endured similar circumstances. The skills she developed have also helped her self-confidence. “I really wanted to learn something productive for myself, and that course really helped.”

Asma began attending information sessions, including one on the harms of child marriage.

Child marriages have reportedly increased in the region. The persistent insecurity, lost incomes, displacement and uncertainty are driving some parents  to marry their daughters off.

Yet child marriage is a human rights violation, one that deprives girls of opportunities and reinforces gender inequalities. These are consequences Asma knows all too well – she was married at only 14 years old.

She now advocates against child marriages, speaking with other women in the centre about the damage it causes to girls’ welfare and future.

Asma recently reflected on how much her life has changed.

“My life was full of fear. I did not know what to do,” she told UNFPA. But now, she has a sense of purpose. “I want to learn… I want to do something,” she said.