AMMAN, Jordan – Amir* arrived in Jordan two years ago with gunshot wounds in his back. He had been beaten and even declared dead while his family tried to flee their home in the besieged Syrian city of Homs. Today, he has built a new life in Amman, and is helping other Syrian refugees do the same.

Amir says his family was detained at a checkpoint when he, his mother and sister tried to cross the border into Jordan. He was brought into an interrogation room and beaten for hours. Finally, they told him he was free to go. But as he walked away, the assailants shot him in the back three times at close range, then left him crumpled on the ground.

Bystanders rushed him to a hospital, where he was pronounced dead on arrival. It was only when staff at the morgue realized he was still alive that Amir received emergency medical attention. 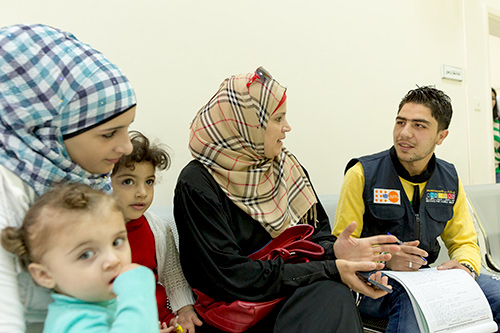 “I have angels looking after me,” Amir said, remembering the experience.

To this day, he does not know why he was attacked.

Amir and his family left Syria as soon as he was released from hospital. But the journey was difficult, and they were separated en route to Jordan.

They were reunited when they reached Amman. There, Amir sought further medical assistance for his wounds. At an Institute of Family Health centre, supported by UNFPA, he received medical care as well as psychosocial assistance to cope with the stress of the beating and displacement.

Haya, the centre’s manager, saw that Amir helped put other visitors at ease. “He interacts with the patients, and especially the Syrians, in a very smooth, nice way. His communications skills were just excellent.”

He was asked to serve as a volunteer, in exchange for a small stipend, and was trained to sensitively work with new arrivals at the health centre.

“I was depressed and lost,” Amir told UNFPA. “The centre offered me a great opportunity to live again and to be useful.”

Builders of the future

Today, Amir, now 21, shares a small flat with his family. He helps them care for his aunt and grandmother, who both have health problems. “Our main worry is that everybody has enough to eat,” he said. “But at least we are safe and we’re all together.”

He says his time at the centre is rewarding.

He has also learned computer skills through a programme at the centre, and will soon begin training to become a social worker.

“I wasn’t able to finish school in Syria, and it is a chance to stay connected to learning while helping other Syrian refugees access health care and information. The allowance I get at the centre helps to support my family in Jordan,” he said.

He encourages his family to make use of the programmes there, as well.

“Young people are a potential not a burden,” said UNFPA’s Humanitarian Coordinator in Jordan Shible Sahbani. “Being refugees never stopped them from getting involved in helping their peers, their families and themselves. They are in the best situation to be good humanitarian actors and the builders of the future.”

Amir agrees. “I want to make the most of this chance,” he said. “I’m trying to learn as much as possible from this opportunity.” 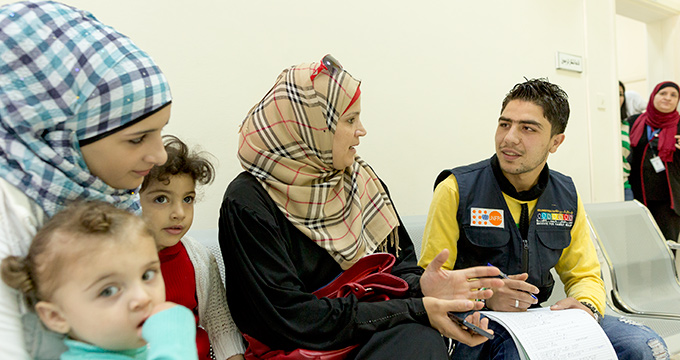