HANG KIA, Hoa Binh Province, Viet Nam – When Kha Y Khua gave birth to her first child 13 years ago, she broke with tradition and gave birth at the local health station. Her people, the H’Mong, live mostly in mountainous, hard-to-reach areas, and are known for their close family ties and strong cultural traditions and beliefs. In H’mong cosmology, a life-soul can be snatched by evil spirits and separated from its body. Because newborn babies are so small and new to life on earth, they are especially vulnerable.

Traditionally, mothers-in-law assist at births and use various ploys to protect the infant’s soul from being snatched away. The placenta is buried nearby so that later, upon death, the soul can retrieve the placenta -- its very first ‘garment’ -- required for a successful reunion with ancestors and eventual reincarnation.

Such beliefs keep many H’mong women from accessing reproductive health services even today. One result has been high rates of maternal mortality among H’Mong living in north-western Viet Nam.

However, as a result of consistent campaigns to raise awareness about maternal health, to train local women in midwifery skills and to respect the local culture, attitudes are changing and more and more H’mong women are accessing reproductive health services in Hoa Binh, as well as in other provinces.

Three years ago, when she got pregnant for the second time, Khua knew she wanted medical attention for herself and her child. “That time I was assisted by a midwife,” she says, adding that she felt more comfortable at this delivery since there was a female staff providing services at the health centre. “H’Mong women prefer to be attended by another woman. If the health worker is a man, then we will feel more shy,” she says with a smile. 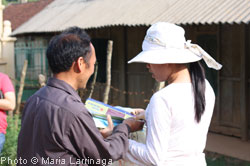 Most H´Mong people neither read nor write. They have few social relationships outside of their ethnic minority group, partly because of the language barrier. This makes it difficult to reach out to them, especially on sensitive issues such as reproductive health services.

“In comparison with people in other communes, the H´Mong are less aware about reproductive health services and care. But progress has been made,” says Vang A. Mua, head of the Hang Kia Commune Health Centre.

“However, we are working to increase knowledge, change behaviour and promote access to reproductive health services,” he adds. “In fact, we are promoting a network of people to carry out activities in the community. Every month health workers visit the households to distribute information, education and communication materials and organize village meetings to inform people about reproductive health topics.”

These efforts have convinced many H’Mong women to get medical attention as their pregnancies progress. “I have learned that it is very important to go to the health centre for a checkup during the first three months to confirm the pregnancy, and after that to monitor the growth of the baby and see the position of the foetus. During my checkups, health workers have also provided me with advice for better maternal health,” Khua says.

Since 2001, UNFPA, the United Nations Population Fund, in partnership with the Government and other United Nations agencies, has supported these activities, convinced that improving the knowledge and awareness of people on reproductive health is key to increasing the utilization of services among target groups and improving maternal health. The Fund also supports recruitment and training of local health workers.

Delivering for Ethnic Minority Women in the Mountains of Viet Nam

Sung Y Mua, for instance, is just 25 years old, but she is already an important person in Hang Kia, where she works as a midwife at the commune’s health centre. She attended a medical high school, holds a degree in midwifery and has received additional training in reproductive health and communication. As a H’Mong, she speaks the same language and shares the same culture as her clients at the health centre. And the local women are taking notice.

“Before Mua started to work at the commune health centre, most H’Mong women did not come. Since she joined us, more and more are coming,” says Vang Mua.

In her daily work, Mua provides pre-natal and gynaecological examinations as well as newborn care, helps women decide on family planning methods, and attends normal deliveries. She has also been trained to handle some life-threatening obstetric emergencies. “I can manage with complications like haemorrhages, for instance,” Mua says self-confidently. However, she remains cautious, stating that whenever she finds something beyond her capacity she refers the patient to a higher level, which is the District Hospital in Mai Chau, about fifty kilometres away.

Making sure midwives are sensitive to local customs and beliefs is an important element of UNFPA’s strategy to improve maternal health. “At UNFPA, we believe that promoting access to reproductive health and rights always requires a culturally sensitive approach,” says Dao Khanh Tung, a sexual and reproductive health officer for UNFPA. “This is even more crucial while working with the H’Mong.

“In order to provide better services to this ethnic minority group, we have to bear in mind its culture, beliefs and traditions,” he adds.

“UNFPA provides support for the provision of skilled H’Mong midwives. The midwives, as demonstrated by Mua, have a cultural connection with the women and encourage them to change certain harmful practices, while also providing access to reproductive health services,” Tung explains.

Efforts to ensure that all births are attended by skilled health personnel have contributed to a drastic reduction of maternal and infant mortality. In Hang Kia, for example, no maternal deaths have been reported since 2003, when Mua started to work at the health centre. Although pregnancy outcomes vary widely among different regions, the Government has confirmed that maternal mortality is declining nationwide, and that the country is on track to reduce it to 60 per 100,000 live births by 2010, with the aim of meeting the Millennium Development Goal 5 target by 2015.