BANDA ACEH, Indonesia—Nearly four weeks after the tsunami, doctors and local social workers say there will be an increased demand for contraceptives among the displaced population, as couples seek to prevent pregnancies while they are living in camps.

A medical doctor with the Indonesian National Family Planning Coordinating Board, Tri Tjahjadi, said that his office is experiencing an increase in demand for contraceptives from people in camps in various parts of Aceh province.

“As the victims of the disaster start recovering, we expect an increase in sexual activity, especially during the next three months,” Tris said. 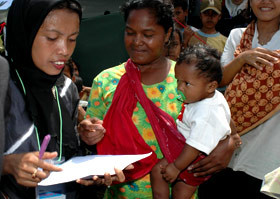 Under normal circumstances, about 60 per cent of Indonesian couples use contraceptives regularly.

“Many women do not wish to have children while they are living in camps. They are used to getting their contraceptives from their midwives but now they are unable to, either because of lack of supplies, or lack of access to health personnel,” said Lily Puspasari, an expert on gender issues who works for UNFPA, the United Nations Population Fund, in Aceh. As part of its response to the tsunami, UNFPA is providing contraceptives along with equipment, medicines and supplies to ensure safe childbirth and prevent sexually transmitted infections and HIV/AIDS.

Family planning services are important in the aftermath of natural disasters, because they help prevent unwanted pregnancies, avoid pregnancies spaced too close together or dangerous pregnancies in women who are too young or too old, as well as the transmission of sexually transmittable infections, including HIV/AIDS.

Darmiyaty, a 23-old married woman and mother of a 6-month-old boy living in the Lampeuneuruti camp in Banda Aceh, said she cannot afford to have another child. “Not in this situation, because I lost everything.”

UNFPA is assisting governments and local populations in all the countries affected by the devastating earthquake and tsunami. To support the Fund's emergency response to the disaster or learn more, please visit www.unfpa.org .

Visit by a Crown Princess