AWASH, Afar Region, Ethiopia — A smile formed on Dohra Ali’s face when she recalled what her eldest daughter asked her a couple of years ago. “Mother, is there a place in this world where FGM is not practised where I could go to?” At the time, the question came as an affront to Dohra, who was herself one of the women in the community who did the cutting.

Thinking back, Dohra says the words of her daughter were prophetic. A campaign to abandon female genital mutilation/cutting was begun in the region right about that time – in the year 2000. The campaign was mainly spearheaded by religious leaders, who worked tirelessly to inculcate an understanding among their more conservative counterparts, clan leaders and the community at large that the practice is not supported by Islam. This came as news to many, who had grown up with the idea that it was a religious requirement.

Dohra was fiercely opposed to the campaign at the beginning. However, she was persuaded later on when the religious leaders held discussions with her community and condemned the practice. Once she learned that it did not have the backing of Islam, Dohra resolved to spare her five daughters from the ordeal and to stop her own practice. Despite ridicule by some members of her community, Dohra went ahead and joined the anti-FGM/C campaign.

The campaign continued for six years, culminating in a conference in 2006 where consensus was reached to totally abandon FGM/C in the region. The conference involved senior officials of the regional government, zonal administrators, woreda (district) and kebele (sub-district) officials and religious and clan leaders. A government regulation reaffirming the Penal Code of Ethiopia (ratified in 2005), which criminalizes the practice, was also passed.

It was on this platform that the UNFPA-UNICEF Joint Programme on the Abandonment of FGM/C in the Afar region was built.

The Afar region, one of the hottest and driest places on earth, ranks second in the prevalence of FGM/C in Ethiopia after the Somali Region, with prevalence rates of 74 and 92 per cent, respectively, according to the Demographic and Health Survey conducted in 2005. In the Afar region, women have traditionally been subjected to the most severe form of the practice, infibulation, usually between the ages of seven to nine. In some districts it is carried out within the first few days after birth.

Infibulation involves the entire removal of the clitoris, the labia minora and labia majora, followed by sealing of the wound, which leaves only a small hole for the passage of urine and menses. Figures show that 63.2 per cent of women in the Afar region have undergone infibulation (some people are now practicing a less extreme form). The practice leaves the girls with severe pain and trauma, shock, haemorrhage, sepsis, urine retention, ulceration of the genital region, and urinary infection, among other complications. Obstruction and tearing during sexual intercourse or childbirth is common. 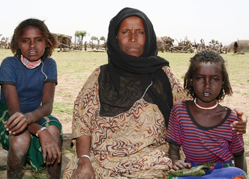 The core strategy of the UNFPA-UNICEF Joint Programme is to gain the support of an initial core group, which decides to abandon the practice and then helps mobilize a sufficient number of people to facilitate a tipping point – enough of a consensus to create a rapid social shift on the norm. The Afar Pastoralist Development Association, Rohi Weddu Pastoralist Women’s Development and the Women’s Affairs Office are working as implementing partners. The Joint Programme is initially operating in all the sub-districts of the six districts forming Zone 3 of the Afar Region, namely Amibara, Argoba, Awash Fentale, Buremudayitu, Dulesa and Gewane.

Community dialogue was identified from the outset as a pivotal tool for mobilizing community support. A Consensus Building Conference was held in the zone early in 2009, where regional, district, and sub-district government and administration officials took part and reached a unanimous agreement to support and facilitate community dialogue in their respective communities. They also pledged to play an exemplary role in their community by not circumcising their own children. In addition the participants agreed to introduce and enforce the legislation after the communities reached a consensus on abandonment.

Community dialogue facilitators were trained in the six target districts. The training was provided by members of the Afar Region Anti-Harmful Traditional Practices Committee, which is constituted by representatives of the Regional Islamic Affairs Supreme Council, Women’s Affairs Bureau, Justice Bureau and the Regional Council. Administrators, clan and religious leaders and former circumcisers participated in the trainings, which covered FGM/C’s relationship to Islam, its effect on health, and the legal rights of women and children. Once trained, the community dialogue facilitators were entrusted with the task of disseminating information and knowledge among community members during the community dialogue sessions. Hundreds of such sessions have taken place.

Despite the extensive system put in place to implement and monitor the programme (see box below), a few instances of parents continue to have their daughters cut have been uncovered. The village anti-FGM committees diligently report these cases and the offenders receive punishment for violations. But reports show that some circumcisers who were brought to justice were released with a pardon, though there is no such provision.

The Afar way of life poses programming challenges. Predominantly pastoralists, they are unable to regularly attend the community dialogue sessions to get enough information on FGM. This makes it difficult to monitor progress at community level. Moreover, in some community dialogue sessions some community members have argued for shifting from infibulationsto a less severe cut (sometimes referred to as sunna), which is not punishable according to some religious leaders.

These young girls are being spared the pain and lifelong consequences of FGM/C thanks to efforts to change hearts and minds about the practice. Photo: Abraham Gelaw

Nevertheless, early indications show that the Joint Programme is bearing impressive results. According to Ato Asmelash Woldemariam, Executive Director of the Rohi Weddu Pastoralist Women Development, the number of uncircumcised girls in the six woredas of intervention has reached 4,000. This is unprecedented in the region, where tradition holds that “an uncircumcised woman is one who is waiting for her day of circumcision or one who has already passed away,” says Ato Asmelash.

It is expected that two of the intervention woredas of the Joint Programme, Awash Fentale and Amibara, will declare themselves free of FGM/C this year, according to Ato Asmelash. If funding is secured, the programme will be scaled up to include three more woredas. In the meantime, the emphasis is on consolidating the success already achieved, by adding elements such as income-generating activities and literacy training, mainly targeting former circumcisers.

Though the overriding focus is on the accelerated abandonment of FGM/C, efforts are being made to include other harmful traditional practices in the community dialogue process. For instance, in Afar there is a strong belief the girls could engage in sex or could get raped if they are not married by age 15, which puts pressure on girls to get married early. But efforts are currently being undertaken to push the age of marriage of girls to 18 by helping girls to go to school. Girls’ education, has, accordingly, increased in recent years and the members of the anti-FGM committees like Dohra Ali are playing exemplary role by sending their own daughters to school.

Thanks to the relentless efforts of Dohra Ali and other members of the community, Doho has been chosen as a model kebele in the Awash Fentale woreda for the accelerated abandonment of FGM/C. Dohra has helped to create the community her daughter once dreamed of. Her girls are now part of the first Afar generation of girls to grow up free from the harm of FGM/C.

Structures have also been put in place on the ground to monitor the implementation of the Joint Programme. Anti-FGM committees have been set up at the kebele level comprising the clan leader, a community elder, two former circumcisers, and the Kadi (local judge). There are also anti-FGM village committees composed of two former circumcisers, a village elder, clan leader, and the religious leader in the community. The members of the committees teach the community on the consequences of FGM/C and report cases when they see evidence of it.

In the villages uncircumcised and newborn girls are now being registered, a record which serves as a follow up mechanism to protect them. The registers are reported on a quarterly basis.

Monitoring work is being undertaken on a regular basis together with the woreda administrations. The monitoring work has been integrated in the routine works of the woredas. When the woreda and kebele administrations hold their periodic meetings, FGM/C is discussed as one development issue. Moreover, a regional network of governmental and civil society organizations working on the abandonment of harmful practices has been established to create a common understanding and approach in the quest to achieve total abandonment.