BANDE, Niger — In the shady village square, forty men aged between 25 and 50 years gathered around their spokesperson. “For four years, we have been criss-crossing the villages night and day to promote family planning, visits to the health centre, antenatal visits, childbirth at the maternity and vaccination,” he told visitors proudly. The men are students at one of four Schools for Husbands in the Bandé rural community (population, 62,844).

The schools – 137 have been established in the Zinder region of southern Niger, and this month more will open in the Maradi and Tahoua regions to the west – are a strategic response to the poor maternal and newborn health indicators in one of the world’s least developed countries. Niger’s maternal mortality rate of 648 deaths per 100,000 live births, according to a 2006 DHS survey.

International estimates put the maternal mortality rate almost three times as higher. Even the lower estimates mean that every two hours a Nigerien woman dies giving life. Most women give birth at home, and very few women use contraception, even though reproductive health care, including Caesarean sections and family planning, are now free.

An innovative response to a socio-cultural barrier

Niger is a country where men wield power, according to tradition and legal codes. Most women are illiterate (74 per cent) and married by the age of 18 (80 per cent), often without their consent. Violence against women is widespread and widely tolerated. Niger ranks almost at the bottom of the Gender Equality Index. A 2007 survey conducted by UNFPA/Niger identified men’s dominance and attitudes to be one of the major obstacles to women taking advantage of reproductive health care. The School for Husbands, launched that same year, aims to change this.

The School for Husbands is voluntary, but it is also selective. Members are selected on the basis of nine criteria including being a husband whose wife/wives (polygamy is legal and quite common in Niger) use the reproductive health services; being at least 25 years old, and of good moral conduct and acceptance of women’s participation in community life. These men become guides and role models within their own family and among others in the community. 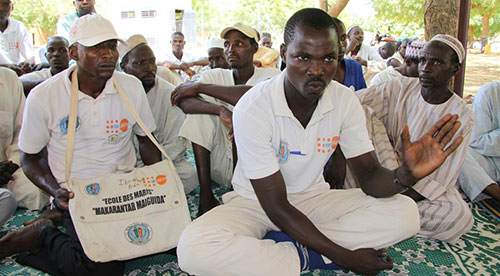 Members of the school meet about twice a month to analyse and discuss specific reproductive health cases noted within the community. They look for solutions, relying on their own knowledge and experience or those of resource persons such as health personnel. The group dynamic gives members a chance to see different ways of looking at maternal health and serves as a tool for changing attitudes and behaviour.

All members are equal and work in a non hierarchical framework, each one assuring a part of the school’s responsibilities in rotation. The strengthening of capacities and supervision of the schools are carried out by the Ministry of Health and local NGOs such as Association Nigérienne pour le Bien-être Familial – Family Welfare Association of Niger.

Some schools also work in collaboration with a support group made up of women in order to further facilitate communication with women, which can lead to solutions. For instance, when women mentioned that the lack of a proper latrine was one reason for not going to the maternity, a group of men built one. They also constructed a house for the midwife.

The fact that the schools are supported by both official authorities as well as by traditional and religious leaders, with the Sultan of Zinder at the forefront, is an important key to their success.

The schools get results

Results obtained in three years are impressive. “Since the establishment of Schools of Husbands, visits to the integrated health centre and the utilization of contraceptive methods have increased,” Yahya Louché, the head of the Bandé district observed. He noted that other community mobilization activities, including the use of community radio, as well as improved supplies of reproductive health commodities, are also having an impact.
A woman from the village added her point of view: “Formerly, we were afraid of the maternity in the same way that one is afraid of death. But now we go there with enthusiasm.”

Use of family planning services has tripled. The number of childbirths attended by skilled health personnel has doubled. The rate of antenatal visits rose from 28.62 per cent in 2006 to 87.30 per cent in 2010, according to the figures from the Bandé Integrated Health Centre.

Equally important is the change observed in dialogue between couples, as well as a heightened awareness of the importance of women’s health and greater consideration of women’s opinions and needs.

“We have seen many changes since the schools were set up,” said one wife. “The men have become more aware. It is the men who take their wives now to the Community Health Centres.”

Organizers say ther has been a noticeable change in behaviour among villagers, authorities and health workers alike. “The initiative is having such an impact that it has caught the attention of other development partners,” say Mr. Yacine Diallo, the UNFPA Representative in Niger.

Indeed, after seeing a UNFPA presentation on the project at the Conference on Population, Development and Family Planning in Francophone West Africa, several countries, including Burkina Faso and Guinea, expressed their desire to replicate the programme as a way to build demand for family planning services.

The Government of Niger has made a formal commitment to support the UN Secretary General’s initiative for women’s and children’s health, in order to accelerate the attainment of the Millennium Development Goals 5 and 4. Key actions include increasing the country’s health budget, and allocating a quarter of it to reproductive health and committing to universal access to reproductive health care for all women of reproductive age. The government hopes this will encourage wider contraceptive prevalence and slow Niger’s annual growth rate from 3.3 per cent to 2.5 per cent.