LIMA, Peru – For survivors of gender-based violence in Peru’s Ayacucho region, filing a police complaint used to be a daunting experience. On top of dealing with the trauma itself, women — many of whom live in poverty and come from rural and marginal urban areas — had to visit several offices to complete the paperwork and wait months, or even years, for a judge to order police protection.

The administrative hassle severely limited the number of women seeking police assistance. Only 37 per cent of survivors called the police to report abuse, while 54 per cent preferred to seek help from family members or friends, according to a 2018 survey. These are significant figures in a region where the same survey found that 1 in 3 women had suffered violence from their partner.

"Gender-based violence [here] is a structural problem rooted in society," said Richard Sarmiento Quinta, a former official from the Municipality of Huamanga. "We realized that the only way to really respond to this problem was through an integrated approach [that avoids] re-victimizing the victim.”

In late 2015, Peru passed a law that, for the first time, guaranteed police protection for survivors of gender-based violence. But it did not commit resources to extend these protections to hard-to-reach areas.

After consulting with local communities, the justice system and partners including UNFPA, the Huamanga Provincial Municipality decided to enforce the law by deploying a response system carried out by judges specialized in family law, police officers and social workers. In that framework, the Emotional Social Care Centre (CASE, by the Spanish acronym) was implemented as a provincial initiative that articulates the competences of institutions responsible for processing cases of violence, providing multi-sectoral and multi-disciplinary care to the victims.

The CASE Centre offers social and legal support for women survivors with its own police station, court and prosecutor's office with prosecutors specialized in both family and criminal law alongside a municipal ombudsman for children and adolescents. It also features a mobile urgent response unit for survivors of gender-based violence and a separate Women’s Emergency Centre, which operates 24/7 since September 2019.

Survivors receive assistance from trauma specialists before they talk to a police officer, who then files a complaint before a family court. A judge then reviews the case and can order police protection within a day.

The CASE Centre has processed 653 cases from January to August 2019. Many of these cases involve women who might have avoided reporting violence in the past because they depend on their partners for financial or material support.

But women are feeling increasingly encouraged to seek help – especially when they know that the police protection can be extended to their children.

"Before the new law [and the programme], these cases would take months, even years to go to court," said César Arce Villar, a former president of the Ayacucho Supreme Court. "Now we have the capacity to hold a hearing within 24 hours."

Officials from family courts, police stations and staff of the Women’s Emergency Centre all work together at the CASE Centre. While many are based in Huamanga, the region's capital, others come from faraway towns and villages, helping to spread the practices and perspectives throughout the region.

For Carolina Vargas, regional coordinator for the Peruvian Ministry of Women and Vulnerable Populations in Ayacucho, the CASE Centre is a model for the entire country.

The centre, she explained, puts together, in a single space, officials representing the courts, the security forces and social and legal services. All sectors collaborate to give victims access to "justice, protection and recovery."

Edwin Gomez, human development manager of Huamanga Municipality, noted that integrating all services in one place is indeed "the most effective way to help survivors."

"We are delivering integral and quality services for women who come to us asking for protection, justice and well-being," said Melissa Bustamante, a UNFPA gender and human rights specialist. In Peru, UNFPA is coordinating the Joint Programme on Essential Services for Women and Girls Subject to Violence with support from the UN Development Programme, the World Health Organization and other partners.

Mr. Sarmiento also believes the programme can be a model for all Peru. He is pleased to see how many women have been able to not only escape violence but seek justice.

"That's what we want – [to] contribute to a more just society." 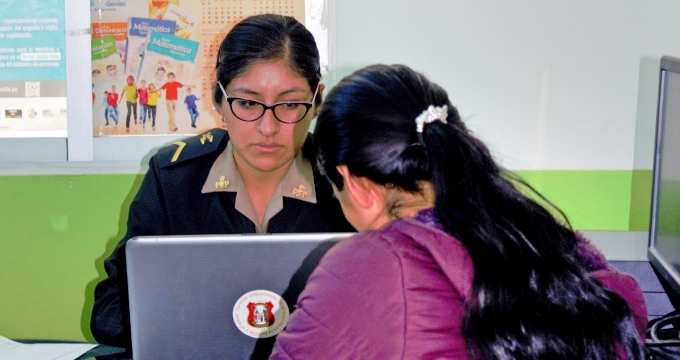