Stigma and embarrassment keep young people from learning about their bodies, health and rights.

To address this need, UNFPA, the Ministry of Health, Imbuto Foundation and other partners recently released Mobile for Reproductive Health – or M4RH – an interactive messaging system that reaches mobile phone users with information about puberty, preventing sexually transmitted infections and unintended pregnancy, and where to find health services.

“M4RH has helped me understand the importance of abstaining from sex, but also the proper use of condoms,” said Nyiransengiyumva Odette, 23, an early user of the mobile phone programme. 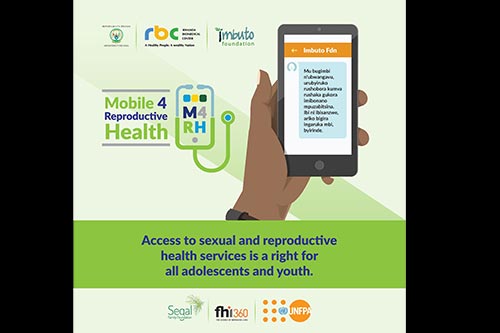 A promotional campaign encouraged young people to sign up to receive the messages.

She added that much of the information provided is not readily available to young people.

Lack of information about sexual and reproductive health takes a serious toll.

According to a 2014 national survey, 7 per cent of Rwandan girls aged 15 to 19 were pregnant or already mothers. Nearly one in five women would like to prevent or delay pregnancy but have an unmet need for family planning.

Mobile phones offer an avenue for experts to reach youth with accurate information on these topics in a private, nonjudgmental way. Over 60 per cent of households in Rwanda own a mobile phone.

Because most young people do not have smart phones, M4RH does not require internet access. Instead, it uses short message service (SMS).

“For information about puberty, reply 10. For sex and pregnancy, reply 20. HIV 30. STIs 40. Pregnancy prevention methods 50. Stories about young people 70. And the youth-friendly services directory 80,” said one of the first SMS messages.

“The messages are of benefit to me, but also to my younger sister as well. When I get an M4RH message, I share the information with her,” said Ms. Nyiransengiyumva. “It is a great way to sensitize younger youth.” 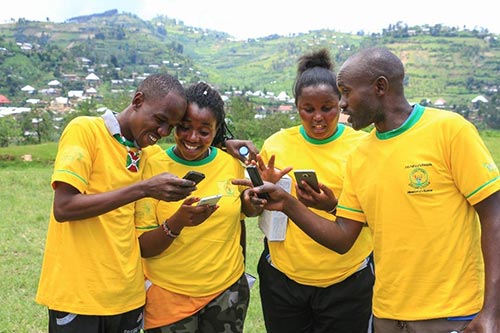 In the 2014 survey, 41 per cent of Rwandan women said wife beating can be justified. Twenty-nine per cent believed physical abuse is justified when a woman refuses to have sex with a man.

“In a healthy relationship, sex should never be pressured, forced, or traded,” M4RH explains in its text messages. “Young people who decide to have sex should use condoms as well as other pregnancy prevention methods to avoid pregnancy and HIV/ STI infection. Having sex will not make you mature faster.”

Rape “is always wrong and the rape survivor is never guilty,” another message states, encouraging survivors of violence to seek assistance.

Telecommunications companies in Rwanda joined the partnership to launch M4RH, ensuring the programme works on all carriers and without charge.

The Ministry of Health developed the content and provided the messages in Kinyarwanda, one of the country’s official languages. UNFPA also helped to develop the content, ensuring the messages were suitable for a young audience. The Imbuto Foundation also provided support.

The programme was launched in October in the western district of Rubavu. District officials and partners brought together youth to subscribe to the programme, test it out, and receive sexual and reproductive health services including HIV tests, hepatitis screenings and free condoms.

M4RH has quickly gained popularity. In September, over 100,000 people registered for it.

In the coming months, developers hope to expand on the tool, reaching other age groups, and adding an ability to provide reliable, factual responses to direct questions from users.