MONROVIA, Liberia – Ebola has devastated health systems in Liberia, where the outbreak appears to be intensifying. UNFPA is providing protective gear to health workers and safe delivery kits to health facilities, helping to restore access to life-saving care. Still, the situation remains dire.

The crisis extends far beyond those infected by the virus. Overwhelmed health systems and widespread panic are posing barriers to essential health care, including life-saving maternal health services.
“The lack of access by women, especially pregnant women, to reproductive health services is a major health disaster in waiting,” said John K. Mulbah, chairman of the obstetrics and gynaecology department at the University of Liberia. 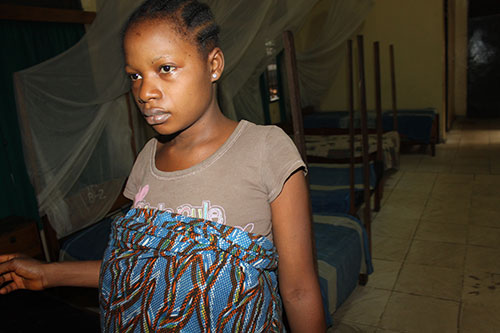 A pregnant woman walks through an empty maternity ward in Monrovia, where many facilities have been abandoned or closed. Photo credit: UNFPA Liberia

Ebola is one of the deadliest diseases to affect humans, with a fatality rate that can reach up to 90 per cent.

Although the death rate in this outbreak has been lower, its extensive reach has made this the deadliest occurrence of the disease since its discovery in 1976. Of the 2,615 cases in Guinea, Liberia, Nigeria and Sierra Leone, 1,427 people have died, according to recent estimates from the World Health Organization (WHO).

These latest figures indicate that Liberia may now be the hardest-hit country. In the short window between 19 and 20 August, 142 new cases were reported, 110 of which were in Liberia. On 6 August, in response to the outbreak, Liberian President Ellen Johnson Sirleaf declared a state of emergency.

Tragically, the disease is taking its greatest toll among those assisting the ill.

While there is no difference between women’s and men’s vulnerability to the disease, the burden of caring for sick family members traditionally falls on women, increasing their exposure to the disease. As a result, health officials have observed more deaths among Liberian women than men.

Health centres around the country have run out of obstetric gloves and personal protection equipment needed to prevent contamination.

Lack of these essential supplies, illness among health-care providers, and fear of infection among staff have all contributed to the widespread closure of health facilities, especially in Ebola-affected areas. 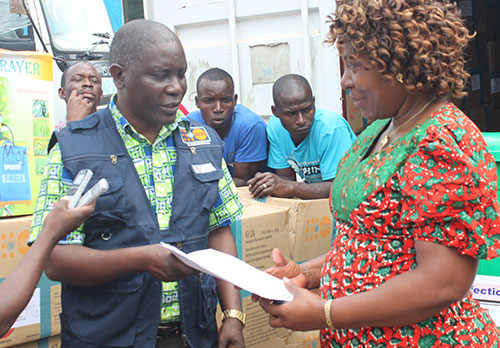 Philderald Pratt, Assistant Representative for UNFPA Liberia, hands over a shipment of reproductive health kits to Caullau Jabbeh-Howe, the family health director of the Ministry of Health and Social Welfare. Photo credit: UNFPA Liberia
The crisis has also diverted critical resources away from pregnant women, who already faced limited access to adequate health care. For example, in Bong, one of the most populous counties, the ambulance used for obstetric emergencies is now being used for the Ebola response. And the surgical and emergency departments at JFK Hospital, one of the country’s major referral hospitals, are closed.
“As a result of the outbreak, there has been an increase in pregnant women dying from preventable causes, including ante-partum and post-partum haemorrhage, ruptured uterus, as well as hypertensive disease,” said Dr. Mulbah.

“We want to ensure quality reproductive health services – including safe deliveries – while promoting universal precautions in all health facilities,” said Philderald Pratt of UNFPA in Liberia.

Two UNFPA staff members are on the case management team of the Ministry of Health, providing on-the-spot training on case management, infection control, and the dissemination of information and supplies to health-care providers. UNFPA is also working with partners to ensure that communities are educated about Ebola prevention.

Ebola has been known to occur in regions of sub-Saharan Africa, though normally fewer than 500 cases take place each year. No cases at all were reported between 1979 and 1994.