SITTWE, Myanmar – More than 600,000 people, most of them Rohingya, have fled from Myanmar to Bangladesh since August, representing a massive escalation in an already grave humanitarian crisis. Yet many people remain in Myanmar, living in cramped camps under escalating pressure and uncertainty.

In the Sittwe area of Myanmar’s Rakhine State, 120,000 people have been confined to camps for more than five years now. Their already harsh living conditions have worsened in recent months.

And with limited access to these populations, aid workers are struggling to assess and meet their needs.

What is clear is that pressure is mounting on already vulnerable families. 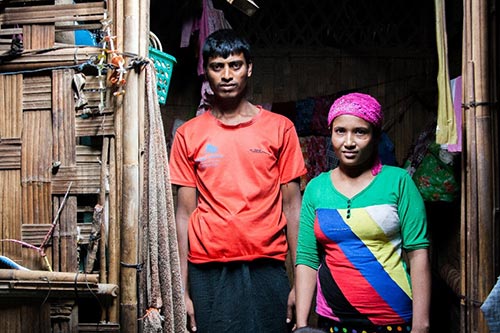 In an interview in July, before the recent escalation of the crisis, Arli and Armju spoke to UNFPA about dealing with the crowded and tense conditions in their displacement camp. © UNFPA Myanmar/Karlien Truyens

Before the recent escalation in the humanitarian crisis, UNFPA interviewed Arli and Armju in the Baw Du Pha camp for displaced persons, just outside Sittwe.

Married for 15 years, the couple used to live in Sittwe, but were forced to move to the camp in 2012 when inter-communal violence broke out in Rakhine State.

At the time of the interview, in July, they and their four children were living in a small room, divided from their neighbours by only a thin bamboo wall.

There was little privacy. Toilets were outside. They washed themselves and their children in the small kitchen area, using water they carried inside.

Neither Arli nor Armju had a job; they were not allowed to leave the camp, and work opportunities inside were scarce.

Occasionally, they sold a chicken. This was their only source of income.

At the end of 2016, Arli and Armju took part in a programme to improve coping skills and reduce conflict, called the Peaceful Family Initiative.

They attended a two-month-long workshop, supported by UNFPA and managed by the International Rescue Committee, that covered issues such as communication skills, anger management, parenting skills and conflict resolution. 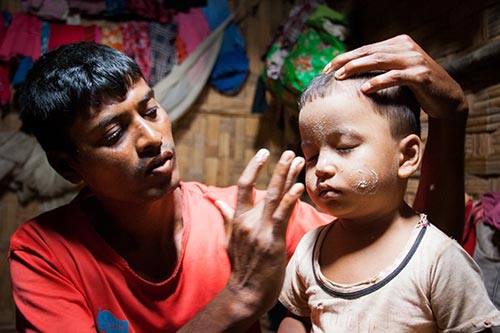 “Before the training, I didn’t think it was important to listen to my wife. Now I try to understand her and we get along much better,” Arli told UNFPA.

“I wasn’t so interested in the children before, but now I feel responsible for them and help them get ready for school,” he added. He even took on the task of grinding Thanaka, a cosmetic paste, and applying it to the children – typically seen as a mother’s duty.

“He helps me with the children and we argue a lot less,” Armju said.

The skills also helped to ease tensions with neighbours.

Prior to the workshop there were regular conflicts, but afterward communication was respectful, the couple said.

Earlier this year, the programme was expanded to six displacement camps around Sittwe, aiming to reach both Rohingya and Rakhine communities. But it was suspended when access to the camps was limited as the crisis took a turn in August.

While Baw Du Pha and other camps became partly accessible in October, it is still difficult to assess how communities are managing under current conditions.

Still, amid the formidable challenges in Myanmar and Bangladesh, Arli and Armju’s story offers insight into how families are endeavouring to manage under extraordinarily difficult circumstances.