COX’S BAZAR, Bangladesh – “My sister was killed after gang rape in front of me, and they threw hot water on my body,” Fatima*, 30, told a case worker at a UNFPA-supported women-friendly space in Cox’s Bazar, Bangladesh. Almost 600,000 Rohingya refugees have crossed the border since 25 August, escaping brutal violence amid the escalating crisis in Myanmar’s Rahkine State.

They’ve joined the 300,000 Rohingya refugees who had already fled into Bangladesh, compounding one of the fastest-growing humanitarian crises in recent times.

Horrific accounts of rape and other forms of sexual violence have been widely reported among the refugees.

UNFPA – the lead UN agency on addressing gender-based violence in emergencies – currently operates nine women-friendly spaces in Cox’s Bazar District, where refugee women and girls can safely receive a range of services, including referrals to health care and counselling.

More than 10,000 new arrivals have been reached at these spaces, including nearly 900 reporting gender-based violence. Still, this is likely just the tip of the iceberg.

“For every woman who seeks treatment or speaks out about her ordeal, many others do not because of concerns survivors have regarding safety, confidentiality, shame and stigma,” said Saba Zariv, a UNFPA expert in responding to gender-based violence. “This is what makes it challenging to come up with an accurate count of gender-based violence survivors.”

“My life is a nightmare”

When she started attending the women-friendly space, Fatima at first refused to speak. But after several visits, she shared her story.

“I can't sleep. My life is a nightmare,” she said. “I can't bear the pain of losing my sister.”

She now regularly receives support and services at the space, which she calls “shanti ghar” – a safe haven.

Shelters and camps are overcrowded and lacking in privacy. Women and girls fear attack on their way to latrines and bathing points. © UNFPA Bangladesh/Naymuzzaman Prince

Shakila*, too, arrived at a women-friendly space in Cox's Bazar in need of help. She had been sexually assaulted, and her husband and baby daughter were murdered in front of her.

The 36-year-old received urgent medical services from UNFPA-trained health personnel. But the trauma of her experience was acute, and much more support is required.

The refugees’ cumulative needs are staggering.

Hundreds of thousands require shelter assistance, according to the latest reports. And those living in shelters are enduring overcrowding and lack of privacy. Women and girls fear attack on their way to latrines and bathing sites.

UNFPA is helping to organize community watch groups to improve the safety of displacement camps. UNFPA has also distributed more than 6,000 dignity kits with essential hygiene items such as sanitary napkins, as well as clothes and torches to help women and girls navigate at night.

In response, UNFPA is supporting health centres and mobile clinics. Thirty-four UNFPA’ midwives are working in Cox’s Bazar. They have so far screened 60,000 new arrivals. They have also provided antenatal care to roughly 12,000 pregnant women, postnatal care to 1,000 women, and attended around 300 deliveries.

Many of the midwives are also trained in the clinical management of rape.

Much more to be done

UNFPA has thousands more dignity kits in the pipeline, and 30 more midwives are will soon be deployed. There are plans to have 35 women-friendly spaces established by February.

But United Nations agencies, including UNFPA, are struggling to raise the funds necessary for these and other life-saving responses.

Humanitarian organizations are seeking $434 million to meet the needs of all Rohingya refugees and their host communities – an estimated 1.2 million people in total – in the months ahead. UNFPA alone needs an additional $10 million for just the next four months. 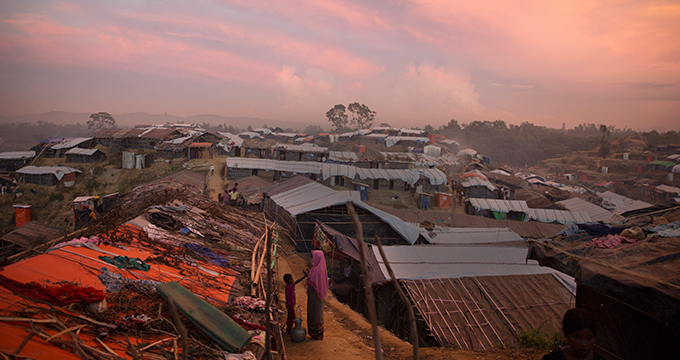