It took hundreds of thousands of years for the world population to grow to one billion – then in just another 200 years or so, it grew sevenfold. In 2011, the global population reached the seven billion mark, and in November 2022, it reached eight billion. This dramatic growth has been driven largely by increasing numbers of people surviving to reproductive age, and has been accompanied by major changes in fertility rates, increasing urbanization and large-scale migration. These trends will have far-reaching implications for generations to come. UNFPA is one of the world’s largest funders of population data collection and helps countries identify and understand such trends, which are critical to development. 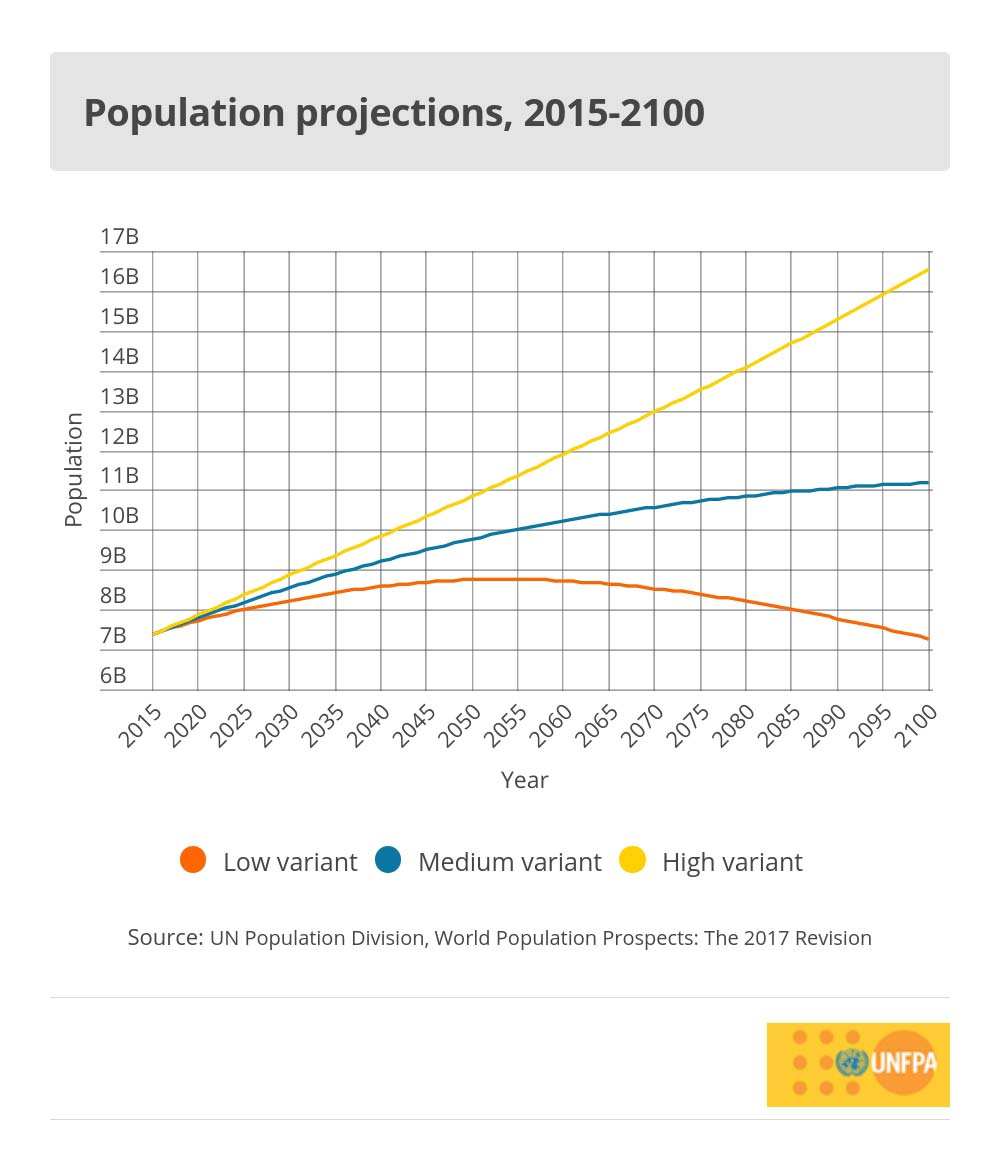 If fertility falls by more than projected, the world population will still reach nearly nine billion by 2100.

The recent past has seen enormous changes in fertility rates and life expectancy. In the early 1970s, a woman had on average 4.5 children; by 2021, the average global fertility rate had fallen to 2.3 children per woman. Meanwhile, average global lifespans have risen, from about 64 years in the early 1990s to 71 years in 2021. (Global life expectancy actually declined from 73 years in 2019 due mainly to the impacts of the COVID-19 pandemic.)

In addition, the world is seeing high levels of urbanization and accelerating migration. The first year in which more people lived in urban than rural areas was 2007, and by 2050 about 68 per cent of the world population will be living in cities.

These megatrends have far-reaching implications. They affect economic development, employment, income distribution, poverty and social protections. They also impact efforts to ensure universal access to health care, education, housing, sanitation, water, food and energy. To more sustainably address the needs of individuals, policymakers must understand how many people are living on the planet, where they are, how old they are, and how many people will come after them.

Why does the population continue to grow?

The growth of the world’s population over the past two centuries is largely the result of advances in modern medicine and reductions in global poverty. These have significantly reduced infant, child and maternal mortality, contributing to an increase in life expectancy.

Although fertility levels have declined, they have not fallen at the same pace as mortality levels. Because of improved survival rates and historically high fertility levels, there are more women of reproductive age today than ever before. This will contribute to a relatively large number of births, even if these women have fewer children on average.

This means the world population will continue to grow for decades to come.

General population trends mask considerable differences between countries. Some have populations that are expanding – quickly. Many of the world’s least developed countries have populations projected to double between 2022 and 2050.

On the other hand, the populations of more than 60 countries and areas around the world are projected to shrink between now and 2050 due to falling fertility and, in some cases, increased emigration. In high-income countries, migration, rather than fertility, will be the main driver of population dynamics over the next few decades.

Age distribution also affects whether populations expand or contract. Today, there are more adolescents and young people than ever before. As these youth age into parenthood, their strength in numbers will drive continued global population growth, despite falling fertility rates.

In countries with ageing populations, on the other hand, the demographic group of reproductive-age women may be shrinking. This could result in slow growth or population decrease.

While demographics vary considerably at national levels, the overall trends have global implications for sustainable development. For example, although the G20 – an organization representing 20 of the world’s largest economies – is responsible for 80 percent of all emissions, the global climate will change no matter where greenhouse gases are emitted. Efforts to sustainably meet the needs and desires of a growing world population will have implications for all countries – as will failure to meet these needs.

Population increases bring challenges and opportunities. They also represent humanity's success. The move from higher to lower mortality and fertility reflects achievements in health, education and human rights. Falling fertility levels also create opportunities for countries to realize a demographic dividend – the economic growth that can occur when there is an increase in the number of people of working age and a decrease in the number of dependents.

Population dynamics can be affected by policies. But these policies must strengthen, rather than weaken, fundamental human rights and freedoms. Population dynamics are and must remain the cumulative result of individual choices and opportunities, and they are best addressed by expanding these choices and opportunities – especially those related to sexual and reproductive health and rights. When couples can freely decide the number, timing and spacing of their children, evidence shows more children survive and thrive, and overall fertility levels trend downward.

UNFPA is one of the world’s largest supporters of population data collection. In addition to supporting censuses and surveys, UNFPA works with policymakers, civil society, healthcare providers and educators at all levels to promote sexual and reproductive health and rights – including voluntary family planning.

UNFPA also offers a wide range of programming to help countries build demographic resilience, or their capacity to address population dynamics in a holistic manner, mitigating negative effects and harnessing the opportunities that come with demographic change.