Kenya, Denmark and UNFPA rally partners for action on ICPD

Kenya and Denmark, co-conveners of this year’s Nairobi Summit on ICPD25: Accelerating the Promise, joined UNFPA to mobilize political support and galvanize partnerships in preparation for the conference, in a side event following the opening of the 52nd session of the Commission on Population and Development.

The Nairobi Summit, to be held on 12-14 November 2019, marks 25 years since the International Conference on Population and Development (ICPD) in Cairo adopted its landmark Programme of Action, centred around the recognition that sexual and reproductive health, gender equality and women’s empowerment are essential to achieving sustainable development.

Chaired by UNFPA Executive Director Dr. Natalia Kanem, yesterday’s side event offered a forum for United Nations, government and civil society partners to discuss key achievements and lessons learned during the 25 years since Cairo – and to articulate their concerns and goals for the summit, which seeks to accelerate the implementation of the Programme of Action in the context of the Sustainable Development Goals. 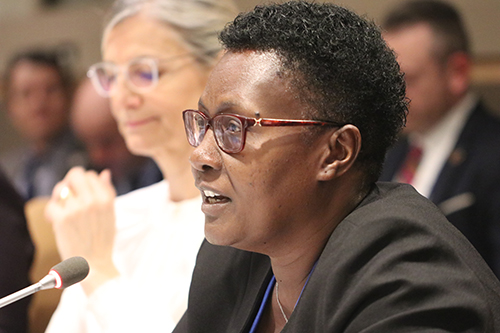 “It’s what we do on a daily basis that matters”

Reflecting on the past 25 years, Josephine Kibaru-Mbae, Director General of Kenya’s National Council for Population and Development, ascribed her country’s progress in elevating the well-being and dignity of its people to the patient work of implementation.

“It’s not rocket science,” she said. “It’s what we do on a daily basis that matters.”

Looking forward, she emphasized Kenya’s plans to expand policies, programmes and domestic financing for sexual and reproductive health, as part of the drive towards universal health care and a decent life for all people – and alongside interventions to support youth and fulfil the country’s potential for a demographic dividend.

“Our fight today is their future”

Ulla Tørnæs, Denmark’s Minister of Development Cooperation, remarked that the millions of people left behind by the progress made since Cairo “still depend on our leadership to improve their chances of a brighter and better future.”

She affirmed her country’s commitment to accelerating the ICPD agenda, including through financial resources. This year, Denmark has set aside DKK 715 (about US$ 107 million) for sexual and reproductive health and rights, more than ever before. This includes support for innovative projects like UNFPA’s new programme to provide comprehensive sexuality education for out-of-school youth in West Africa.

Stressing the importance of partnerships with governments, civil society, the private sector, academia and youth-led organizations, Ms. Tørnæs also noted the need to seek new partners, reaching beyond those already convinced – a sentiment echoed by several members of the audience. “I know we can find common ground, despite our differences, if we choose the right conversations,” she said, “for the sake of women and girls globally.” 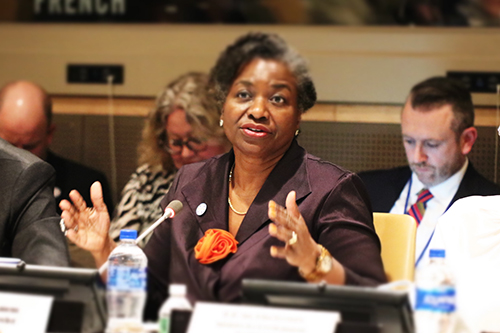 “This was one of those moments when you saw history unfolding,” said UNFPA Executive Director Dr. Natalia Kanem about the 1994 conference in Cairo, which she attended as a young professional. “This is what we’ll recreate now.”  © UNFPA/Usenabasi Esiet

She concluded by characterizing the realization of the ICPD Programme of Action as both an obligation to young people, whose future is at stake, and an opportunity for everyone.

“Unlocking the potential of women and girls,” she said, “unlocks resources that benefit society as a whole.”

“All hands on deck”

As the global custodian of the ICPD, said Dr. Kanem in her statement, UNFPA will convene governments, civil society and other partners – including young people – in a series of events and activities in the months leading up to the Nairobi Summit.

She invited new and existing partners to co-create the Summit as an inclusive dialogue that generates concrete commitments – and keeps the focus on those whose sexual and reproductive rights remain unrealized.

“We will be listening directly to the voices of women, girls, young people – anyone who’s been left behind,” said Dr. Kanem. “And they’re going to tell us that it’s time to deliver on that promise that was made 25 years ago, and that we renewed this morning.”

USAID allocates US$12.4 million to support access to lifesaving reproductive…

Japan and UNFPA partner to support maternal health in Palestine