With the commitment of 10 governments and the European Union, nearly 70 million people have been reached in 17 countries over the past 13 years through the UNFPA-UNICEF Joint Programme on the Elimination of Female Genital Mutilation (FGM), the largest global programme to accelerate the elimination of FGM.

In Ethiopia, despite the current conflict and the deteriorating humanitarian situation in several parts of the country, half a million people were reached through the joint programme in 2020, with critical radio and TV programmes on FGM prevention and awareness.

UNFPA estimates that 16 per cent of girls below the age of 14 are subjected to female genital mutilation in Ethiopia, and 65 per cent among girls and women aged 15 to 49. The weekly radio show Yalaleke Guzo is part of the Ethiopian Government’s efforts to lower these rates.

Yalaleke Guzo, the “Unfinished Journey”, is a talk show in Amharic language targeting the Southern Nations, Nationalities and Peoples’ Region (SNNPR) of Ethiopia, with a variety of entertainment and education messages on the adverse effects of female genital mutilation and child marriage.

Produced in 2020 by the Population Media Center in partnership with the UNFPA-UNICEF Joint Programme, it is scheduled to run throughout 2022. Its various programmes, including interviews, short stories, health tips, audio plays and others, encourage listeners to change social norms and abandon female genital mutilation and other harmful practices.

Recently, Shamu Molo, an ex-soldier from the Kibet Woreda, Slitie Zone, called the radio show to discuss the various intergenerational attitudes towards female genital mutilation and child marriage. “I have four  daughters,” said Shamu. “My wife and I have agreed not to circumcise them. However, my mother, who is the grandmother of our children, wants our daughters to get circumcised because she thinks that uncircumcised girls do not get married.”

To overcome these differences, Shamu suggested that efforts to abandon the practice should start at the household level. Once awareness raising initiatives, such as the Yalaleke Guzo talk show, start changing opinions at home, efforts to alter societal attitudes can be more successful.

By tuning in to Yalaleke Guzo and participating in interviews, Shamu was able to start  conversations with his family, friends and neighbours about the harmful effects of female genital mutilation, and to advocate for ending it.

“We are proud to see that our support of Yalaleke Guzo is producing such amazing results in the Ethiopian kebeles,” said Mireille Tushiminina, coordinator of the UNFPA-UNICEF Joint Programme, which is supported by  Austria, the European Union, France, Iceland, Italy, Luxembourg, Norway, Spain, Sweden, the United States of America and the United Kingdom.

“We believe the radio talk show can play an important role in raising awareness of that harmful practice and in changing people’s entrenched perceptions about it – one listener at a time.” 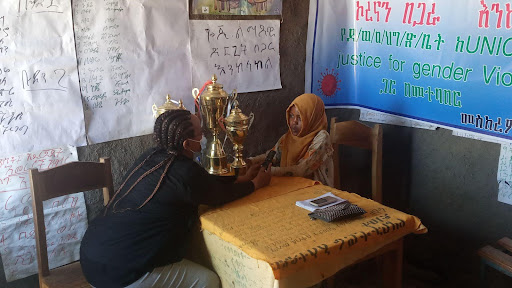 Makeya Wudie, a fifth-grade student from the SNNP region contacted Yalaleke Guzo to help raise awareness  of the dangers of female genital mutilation in her community. “As soon as I learned of my mother’s secret plan [to have me subjected to the practice], I escaped from home and reported the case to the kebele women’s representative”.