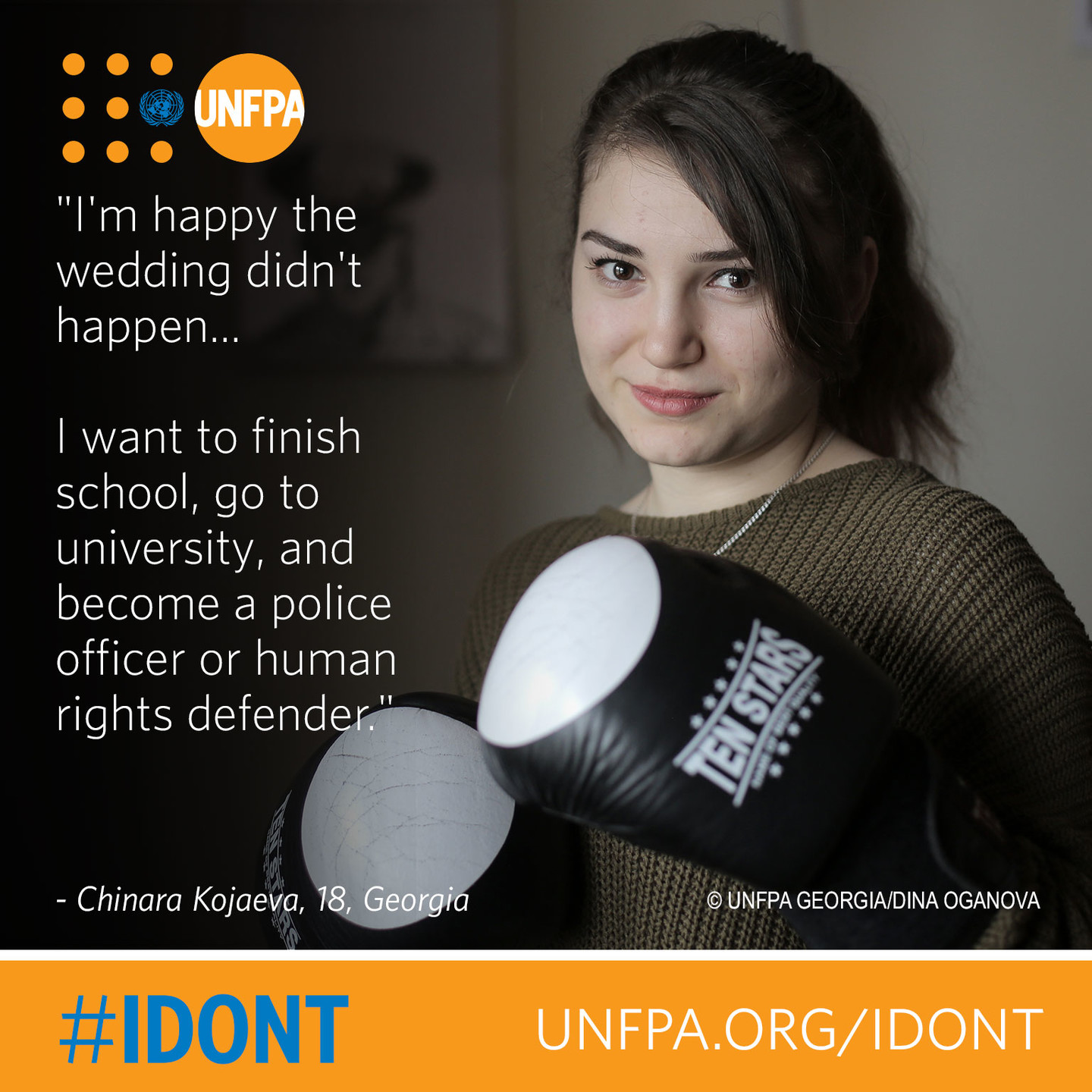 What happens when women and girls say “I don’t” to child marriage?

Every day, tens of thousands of girls become child brides, violating their rights and darkening their futures. But when girls are empowered to fight back, the sky is the limit.

Every day, tens of thousands of girls become child brides. Child marriage violates their rights, threatens their health and darkens their futures. But when girls are empowered to fight back – to refuse or escape child marriage – the sky is the limit. This Valentine’s Day, we explore what happens when girls say “I don’t”.

Globally, one in every five girls is married off before age 18.
But girls like Kakenya Ntaiya are rejecting this practice. “I grew up in rural Kenya. The traditional way of life for girls was to undergo female genital mutilation in preparation for marriage at a young age,” she told UNFPA. “I escaped child marriage and fought for my education.” She went on to establish Kakenya's Dream, a nonprofit organization that uses education to empower girls and transform rural communities.
Learn more
Image courtesy of Kakenya’s Dream
Child brides often drop out of school. But educating girls can break the cycle of poverty.
In Iraq, Elaf had two teenage sisters drop out of school after marrying. “Both sisters wish they had not married at an early age,” she said. “My dream was being a pharmacist, so when my father decided that I should get married at age 15, I refused.” Now 26, Elaf is a pharmacy student.
Image courtesy of IHAO
Young brides often become pregnant while still adolescents. And unmarried girls who find themselves pregnant are often pressured to marry.
This was Poni Helen’s experience in South Sudan. “My parents wanted me to marry when I got pregnant at 16. I defied them because I wanted to finish school. But they did not support me, so I worked and sent myself to school. Now, I am 23 and taking up law while raising my six-year-old son.”
© UNFPA South Sudan/Arlene Alano
Adolescent pregnancy increases the risk of pregnancy complications. Having one’s dreams shattered takes a toll, too.
“My mother got married quite early in life, and though she completed her higher education she was not permitted to work after marriage,” said Farah Faizah in Bangladesh. “This left a lasting impact on her mental and physical well-being.” Today, Ms. Faizah works for the United Nations. “If I was married early, I don’t think I could have gotten the same opportunities.”
©UNFPA/ Asma Akter
Yet families often resort to child marriage because they see it as a girl’s only option – a belief fuelled by poverty, insecurity and gender inequality.
“In my home town, many girls are forced into early marriage. Their parents tend to think that girls have no future if they do not marry,” Hayat Outemma told UNFPA in Morocco. “I am very lucky I could finish school. I am now a teacher and a social activist, working to change mindsets about girls’ education and child marriage.”
Image courtesy of Hayat Outemma
The girls involved in these marriages are extremely vulnerable. They may be exposed to violence, and are often unable to advocate for their needs and rights.
“At age 15, I dropped out of school to get married to an army sergeant who was 20 years older than me,” said Chipasha, now a girls’ advocate in Zambia. “My husband abused me... even when I was pregnant with his child.” But then she began visiting a safe space supported by the UNFPA-UNICEF Global Programme to End Child Marriage. “With the help of our mentor, I finally moved out of my abusive marriage, together with my baby.”
© VandVictors
Child marriages take place all over the world, across a wide range of communities and religions.
Jada, who was born and raised in the United States, was threatened with forced child marriage at the age of 12. She sought help from the rights group the Tahirih Justice Center, and found safety in the home of a relative. “I have accomplished amazing things not having married early,” said Jada, now 17. “I followed my dreams of being a dancer.”
Image courtesy of Jada Martinez
But when girls know their rights, they can stand up for themselves.
In Georgia, Chinara Kojaeva’s parents tried to marry her off at age 15. “I contacted police, and later my parents promised me they would allow me to receive an education and not marry me off until I turned 18.” But when she was 17, they again tried to force her to marry. She told authorities, and then moved into a shelter. There, she is attending classes and learning to paint and box. “I started new life here,” she said.
© UNFPA Georgia/Dina Oganova
The UNFPA-UNICEF Global Programme is reaching millions of girls and community members with information and services to end child marriage.
“Growing up, I never realized that so many girls are denied education and forced to marry early. I was fortunate to get an education that opened doors for me,” said Marie-Claude Bibeau, Canada’s Minister of International Development. The Government of Canada is a major supporter of the Global Programme. “We must all work tirelessly to help girls and young women overcome barriers to their rights and development, so they can reach their full potential.”
Image courtesy of Global Affairs Canada
Still, child marriage is not declining fast enough. If efforts to end child marriage are not accelerated, over 150 million more girls will marry by 2030.
“Ninety per cent of my high school friends got married while being teenagers,” Roceli Dzib García told UNFPA in Mexico. “I have been able to continue my college education thanks to my mother’s support.”
© Walther Mezeta
For those who do escape child marriage, a lifetime of opportunity awaits.
“I’ve seen married young girls leading an unhappy life,” said Rukaiyah, in Indonesia. She endured years of ridicule when she refused to marry young. “I turned a deaf ear when friends mocked me, calling me ‘old virgin’.” Instead, she poured her energy into supporting women’s rights and building her own chip-making business. Today, she has a large staff and a happy family. “I believe that women need to be able to develop their talents and seize every opportunity for their future,” she said.
© Asrul Hamdi/LPSDM