The upsurge in hostilities that began in mid-January in Marib, Al Jawf and Sana’a Governorates, continued into February; resulting in heavy displacement, spike in civilian casualties and damage to civilian infrastructure. Between 19 January and 17 February an estimated 35,000 people have fled their homes from these governorates. Most of those displaced persons are in Marib City and surrounding areas, staying in overcrowded public buildings, in displacement sites and with the local community.Those displaced are in critical need of shelter and non-food items, health assistance and protection services. Amidst a challenging operational environment and shrinking humanitarian space, humanitarian operations, including that of UNFPA have continued to deliver.

The UNFPA-led Rapid Response Mechanism (RRM), providing a standard relief package that includes food, hygiene materials and other essential items, was activated following massive displacement from Al Jawf, Sana'a and Marib, reaching more than 38,000 displaced persons with RRM kits within 48 to 72 hours of displacement since January 2020. Mobile teams deployed in these areas reached over 14,000 women with reproductive health and protection services. 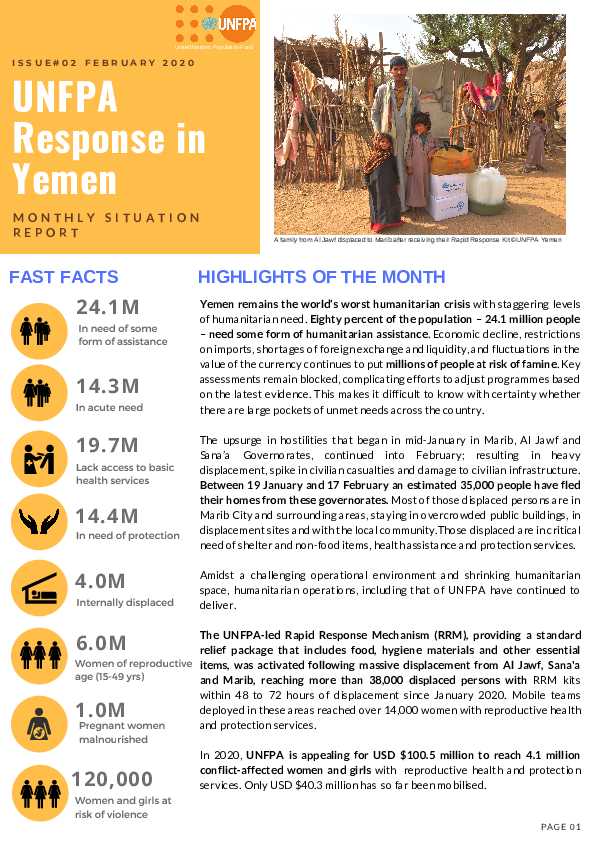