As the largest global programme addressing female genital mutilation, the UNFPA–UNICEF Joint Programme on the Elimination of Female Genital Mutilation: Accelerating Change targets the most vulnerable and marginalized girls and women, who face multiple and intersecting factors that increase their risk of undergoing this harmful practice.

The 2019 Annual Report shows the many ways that the Joint Programme is empowering girls and women to lead change. Creating an enabling environment through policies and legislation, providing access to an essential package of services, and shifting social and gender norms through community-driven efforts are critical in accelerating the elimination of female genital mutilation. But equally as important is empowering girls and women as agents of change.

Efforts to increase accountability and strengthen high-level political will resulted in the African Union launching the Continental Initiative to End Female Genital Mutilation, governments in East Africa adopting a Statement and Action Plan to address cross-border cutting, and the governments of Egypt, Ethiopia and Kenya announcing bold initiatives to meet their commitment to SDG target 5.3 on the elimination of female genital mutilation by 2030.

In 2019, results in the 16 countries covered by the Joint Programme included:

In light of the COVID-19 pandemic, UNFPA estimates an additional 2 million girls to be at risk of female genital mutilation, which threatens to disrupt SDG target 5.3. However, the Joint Programme will continue to work in partnership with governments, civil society, women’s and youth groups, religious and traditional leaders, and communities to promote and protect girls’ and women’s rights including the right to health and bodily autonomy, safety and security, and freedom from discrimination and violence. 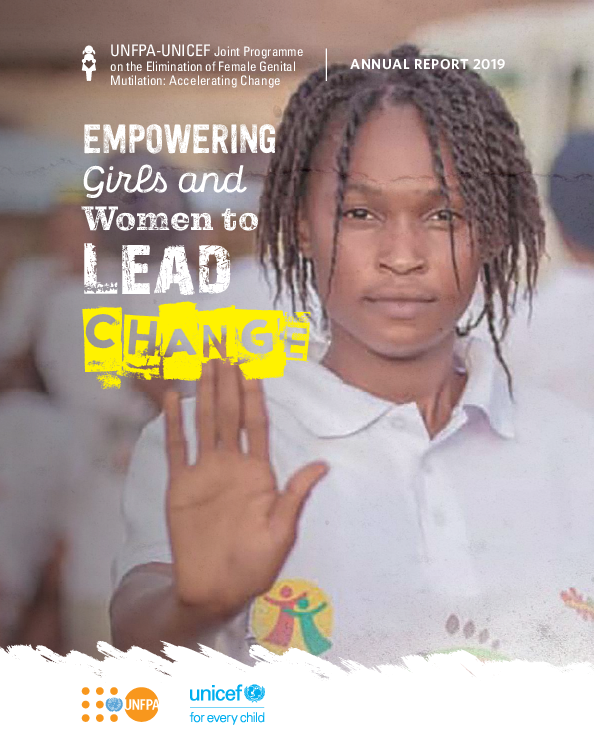 2020 Annual Report on FGM - Sustaining the Momentum: The Performance Report