This report presents 2012 estimates of the numbers and proportions of women in the developing world using modern methods and in need of modern contraception, as well as the cost and impact of meeting this need. The 2012 Adding It Up estimates are comparable to those from the 2009 report (see below) and will therefore enable us to assess progress between 2008 and 2012.

The estimates presented here incorporate the most recent available survey data on need for and use of contraception and updated 2012 estimates of the direct costs of providing contraceptive services. They also draw on updated estimates of pregnancies and maternal deaths. In some cases, where more recent information is not available, the report draws on measures from the 2009 analysis—the most important such instance being estimates of programme and systems costs 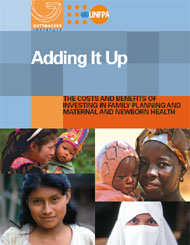