The State of World Population 2017

UNITED NATIONS, New York--Unless inequality is urgently tackled and the poorest women empowered to make their own decisions about their lives, countries could face unrest and threats to peace and development, according the The State of World Population 2017, published today by UNFPA, the United Nations Population Fund.

The costs of inequalities, including in sexual and reproductive health and rights, could extend to the entire global community’s goals, adds the new UNFPA report, entitled, “Worlds Apart: Reproductive Health and Rights in an Age of Inequality.”

Failure to provide reproductive health services, including family planning, to the poorest women can weaken economies and sabotage progress towards the number one sustainable development goal, to eliminate poverty. 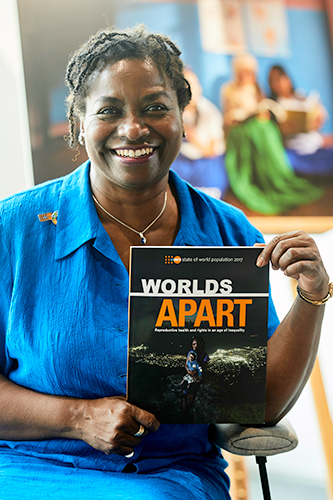 Economic inequality reinforces and is reinforced by other inequalities, including those in women’s health, where only a privileged few are able to control their fertility, and, as a result, can develop skills, enter the paid labour force and gain economic power.

“Inequality in countries today is not only about the haves and have nots,” UNFPA Executive Director Dr. Natalia Kanem says. “Inequality is increasingly about the cans and cannots. Poor women who lack the means to make their own decisions about family size or who are in poor health because of inadequate reproductive health care dominate the ranks of the cannots.”

In most developing countries, the poorest women have the fewest options for family planning, the least access to antenatal care and are most likely to give birth without the assistance of a doctor or midwife.

Limited access to family planning translates into 89 million unintended pregnancies and 48 million abortions in developing countries annually. This not only harms women’s health, but also restricts women's ability to join or stay in the paid labour force and move towards financial independence, the report argues.

Lack of access to related services, such as affordable child care, also stops women from seeking jobs outside the home. For women who are in the labour force, the absence of paid maternity leave and employers’ discrimination against those who become pregnant amount to a motherhood penalty, forcing many women to choose between a career and parenthood.

“Countries that want to tackle economic inequality can start by tackling other inequalities, such as in reproductive health and rights, and tearing down social, institutional and other obstacles that prevent women from realizing their full potential,” Dr. Kanem says.

The UNFPA report recommends focusing on the furthest behind first, in line with the United Nations blueprint for achieving sustainable development and inclusive societies by 2030. The 2030 Agenda for Sustainable Development has “envisaged a better future, one where we collectively tear down the barriers and correct disparities,” the report states. “Reducing all inequalities needs to be the aim. Some of the most powerful contributions can come from realizing...women’s reproductive rights.”

About The United Nations Population Fund:

UNFPA is the lead UN agency for delivering a world where every pregnancy is wanted, every childbirth is safe and every young person’s potential is fulfilled. UNFPA reaches millions of women and young people in 155 countries and territories.