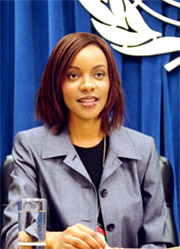 Ms. Kwelagobe is the first person from Botswana to enter the Miss Universe pageant, which she won last year. She has used her title to champion HIV/AIDS prevention, particularly among adolescents.

"I am very honoured that the United Nations Population Fund has realized the potential of what I could do in my country concerning the HIV/AIDS pandemic," said Ms. Kwelagobe.

"I believe that through my determination and love for Botswana, I can successfully, through the United Nations Population Fund, accomplish my goal of seeing the HIV statistics drop and having the women of Botswana get the necessary reproductive health care and facilities they need," she said.

Botswana has one of the world's highest HIV/AIDS prevalence rates, one in every four adults is infected. Life expectancy has fallen from 61 years in the late 1980s to 47 today, and is expected to plunge to 38 by 2005-2010(1).

HIV/AIDS infections are spreading fastest among young people; girls are particularly at risk. Botswana also has a high rate of teenage pregnancy. Almost 60 per cent of the country's first-time pregnancies are to women aged 15-19 years(2). This in turn leads to a high HIV infection rate among their babies through mother-to-child transmission of the virus.

"Mpule can be a tremendous force for change in Southern Africa and elsewhere; because of her celebrity status she can influence both young people and policy makers," said Dr. Nafis Sadik, Executive Director of UNFPA.

"Mpule is a symbol of hope and optimism for the young people of Botswana. We hope she'll be able to influence young people to change their behaviour and reduce their risk of infection and also to influence policy makers to improve adolescent reproductive health services and keep up the required commitment to HIV/AIDS prevention," she said.

Ms. Kwelagobe has already worked with UNFPA in Botswana as part of a peer education group on HIV/AIDS awareness. One of Ms. Kwelagobe's first assignments as Goodwill Ambassador will be to travel to Botswana later this month to launch an initiative called, "The Month of Youth Against AIDS", and take part in a national conference on AIDS. She will be working with the Botswana Ministry of Health and the Botswana National Youth Council.

UNFPA has been working in Botswana since 1971. Its current programme there has a budget of $2.5 million over a five-year period. UNFPA is focusing its efforts at reproductive health services, particularly for adolescents. The Fund is working with local agencies and the Ministry of Health to provide youth-friendly sexual and reproductive health services. Along with many other agencies, UNFPA is concerned with reaching young people in Botswana and helping to reduce the high level of teen pregnancy and HIV infection.

"We are delighted to have Mpule join us as a Goodwill Ambassador. She is a tremendous ambassador for her country. She is articulate, passionate and caring and will work hard to improve the lives and futures of adolescents in Botswana. We are very lucky to have her on board, she is a wonderful role model for women in southern Africa and elsewhere," said Dr. Sadik.

Ms. Kwelagobe was born the youngest of three children to Justice and Dibelang Kwelagobe in Gaborone, the capital of Botswana. In 1997, she moved to Lobatse some 75 kilometres south, in order to attend a special high school for students interested in electronics and science. Her older sister, Bianca, is finishing her studies and her older brother, Serge, is a member of the national cycling team.

She is an active athlete; in 1992, she broke the record in the 100 metres and the high jump, and still holds these records back in her hometown. That same year, she was named "Best Sports Woman of the Year". For the past five years, she has also been active in the Junior Lions Club, working with schools for disabled children.

As Miss Universe, Ms. Kwelagobe has travelled extensively, raising awareness about HIV/AIDS and participated in many charitable AIDS organizations. She has been particularly active in "God's Love We Deliver", an organization that provides meals for homebound AIDS patients in New York. She is the first Miss Universe to work with the Harvard AIDS Institute by hosting a forum on "HIV/AIDS Care and Prevention for Women".

The Government of Botswana and DeBeers have supported the establishment of "The Mpule Kwelagobe Children's Village", which can house 400 children affected by and infected with HIV. Ms. Kwelagobe has also set up a trust fund to support AIDS projects in her country.

After finishing her reign as Miss Universe, Mpule Kwelagobe plans to continue her education and hopes someday to become the first female president of Botswana.

#Showyourselfie: A visual petition for youth