‘Your Life, Your Rights, Your Contraception’

DAKAR, Senegal – The 2,400 experts, leaders and advocates attending the second International Conference on Family Planning here called for scaling up best practices to face the high demand for family planning that goes unmet.

During the event, which was held 29 November to 2 December, the participants -- including 3 first ladies, 17 ministers and donors and parliamentarians -- advocated for universal access to family planning and shared research findings, notably in Africa, America and Asia, through more than 385 presentations and 60 luncheon panels.

As Dr. Babatunde Osotimehin, executive director of UNFPA, the United Nations Population Fund, said at the conference, “Family planning is like oxygen, everyone breathes it.”

By the first day, the United Kingdom announced a pledge of nearly $55 million to UNFPA, while the president of Senegal, Abdoulaye Wade, committed about $1.7 million to family planning, the first such donation for the country.

The forum was organized by the Bill and Melinda Gates Institute for Population and Reproductive Health at the Johns Hopkins Bloomberg School of Public Health and the Senegalese government, with collaboration from UNFPA and others. The first conference was held in Kampala, Uganda, two years ago.

On 30 November, a high-level ministerial meeting was attended by ministers of health, government officials and development partners, including UNFPA. They shared how they have taken advantage of the so-called demographic dividend of youths in their countries, as Asia did in the past to help drive economies.

On World AIDS Day, 1 December, experts took part in a Future of Family Planning and HIV Integration session. Discussing recent research suggesting a link between hormonal contraception and HIV risk, the panelists agreed that the evidence was inconclusive. A global consultation will be convened by the World Health Organization early next year to issue a joint statement on the matter. 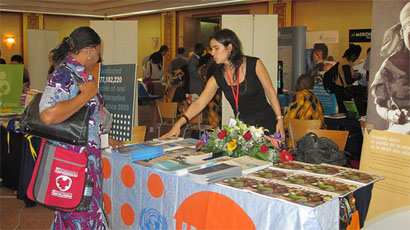 A UNFPA table at the family planning conference in Dakar, 2011, which emphasized paying attention to the needs of youth and to improving maternal health.

Experts also said that it was impossible to make headway in preventing the spread of HIV without investing in family planning at the same time. Globally, AIDS is one of the leading causes of death among women of reproductive age and a major cause of poor maternal health, especially in places with high prevalence of the disease.

The experts therefore called for a comprehensive approach to integrating family planning and coping with HIV-related issues, saying that women and men, including those living with HIV and AIDS, need access to a full range of affordable, quality information, services and commodities.

Stephen O’Brien, under-secretary of state for the British Department of International Development, announced an additional £5 million pledge (about $8 million) from his government to the UNFPA Global Programme to Enhance Reproductive Health Commodity Security to obtain at least 13.5 million female condoms.

The pledge complements Britain's pledge of £35m (about $55 million) for family planning in poor countries, announced on 29 November. This donation will enable a rapid-response-style unit to procure and deliver contraceptives to countries facing low supplies while governments work on better long-term arrangements.

At a press conference on 2 December, UNFPA officials, led by Werner Haug, director of the Technical Division, clarified UNFPA key messages: that family planning should be part of a comprehensive sexual and reproductive health approach; that access to family planning, sex education and broader education is a priority for young people; that country ownership is vital for the success of such programmes; and that there is a need to focus on reducing unmet needs for family planning.

“Time has come to scale up in demand creation,” Haug stressed. At a separate event outside the family planning conference, he handed over $1.7 million of reproductive health goods, including contraceptives, from UNFPA to Senegal.

Back at the conference, Faustin Yao, director of UNFPA subregional office for West and Central Africa, hailed the progress so far in family planning in West Africa, but he noted that the pace is still slow because of sociological and infrastructure problems and the unavailability of contraceptives, including to young people.

"This conference was not about what we should do,” Yao said. “We already know what to do and it is now time to do it, time to act on what works and what produce results.”

Government leadership success in Malawi on family planning has led to a contraceptive-prevalence rate that jumped to 46 per cent in 2010 from 7 percent in 1992, said Dr. Dorothy Nyasulu, a Malawi assistant representative. UNFPA is a key partner in Malawi for the Reproductive Health Commodity Security program.

Speaking at the opening plenary session, Dr. Osotimehin reiterated that “investing in voluntary family planning today will not only pay dividends now, but will also help history’s largest generation of young people enjoy opportunities and forge a brighter future.”

As T-shirts sold by youths on the last day of the conference put it: “Your life, your rights, your contraception.” – Hugues Koné

‘Your Life, Your Rights, Your Contraception’