IBB, Yemen – Midwife Lena Al-Shurmani remembers meeting Abia* at Al Mawa Camp in Ibb. Abia was 15 years old and eight months pregnant. “I was very worried,” Ms. Al-Shurmani recalled. “She had a prolapsed uterus, and she was severely malnourished.”

Abia was worried, too.

“Since I got pregnant, I had been living in constant fear,” she told UNFPA. “I heard of many girls in my village losing their lives and their babies giving birth at my age.”

Escalating hostilities had forced her family to flee from Taizz to the camp. There, Abia said, “we could not afford to travel to a hospital, and did we not know where we could find one.”

Those concerns were well founded: When Abia went into labour, she began bleeding profusely.

Six years of relentless conflict have made Yemen the site of the world’s largest humanitarian crisis. More than 20 million people are in need of humanitarian assistance.

The health system hangs together by a thread; only about half of all health facilities in Yemen are functional, and of those still operating, only 20 per cent provide maternal and child health services. A woman dies in childbirth every two hours.

The country’s looming famine could make things worse. Already, more than a million pregnant and breastfeeding women are acutely malnourished, a number likely to double as food insecurity rises.

Yet life-saving humanitarian aid has been chronically underfunded.

In 2020, more than 80 of the 180 UNFPA-supported health facilities closed due to funding gaps, causing more than 1 million women to lose access to critical care and safe childbirth. Preventable maternal deaths have been documented in districts where these facilities have been closed.

On 1 March, the governments of Sweden and Switzerland and the United Nations are convening a virtual high-level pledging event for the humanitarian crisis. UNFPA is appealing for more than $100 million to provide reproductive healthcare as well as services for survivors of violence and emergency relief through to the end of 2021.

A stroke of luck

In the end, Abia was lucky.

After she began to haemorrhage during labour, her husband rushed to find Ms. Al-Shurmani. The midwife arrived at Abia’s side around 2 in the morning.

“She lost consciousness many times during the delivery. I really feared for her life,” Ms. Al-Shurmani recalled.

Fortunately, she was able to get the bleeding under control.

Abia survived, and she delivered a healthy baby girl. “I am very grateful to the midwife,” she said later. “She travelled far in the middle of the night to save my life and my baby.”

Those services are only possible through the extraordinary efforts of women like Ms. Al-Shurmani. Trained by UNFPA to identify and assist survivors of gender-based violence, she works on an outreach team providing health services, psychosocial care and other support.

“My work targets the most vulnerable and poor displaced families who live in camps and spontaneous settlements, especially as they are unable to reach health services,” she explained.

Her work is often gruelling. “One of the main challenges I face is going out at night without a means of transportation, which forces me to walk with my companions on foot.”

The job takes an emotional toll, as well. Ms. Al-Shurani has seen the vulnerabilities of women and girls increase dramatically. Child marriage rates are also rising as families struggle with poverty and insecurity. A recent UNFPA study across three governorates showed that 1 in 5 displaced girls, aged 10 to 19,were married. Among host communities, this number was 1 in 8.

Abia was one of those girls – she was married off a little over a year ago, at age 14. Ms. Al-Shurmani’s outreach team was able to provide her with psychosocial care, warm clothing, and referrals to emergency food and cash assistance.

Tragically, that outreach team is the last one still in operation. Three other UNFPA-supported outreach teams in Ibb and Taizz have stopped providing services due to funding shortages.

Some 350,000 women lost access to gender-based violence services in 2020, following the closure of 12 UNFPA-supported safe spaces. An estimated 6.1 million women and girls are in need of such services.

“We not only need funding to sustain services but we urgently need to scale up to save the lives of women and girls,” said Nestor Owomuhangi, UNFPA’s Representative in Yemen. 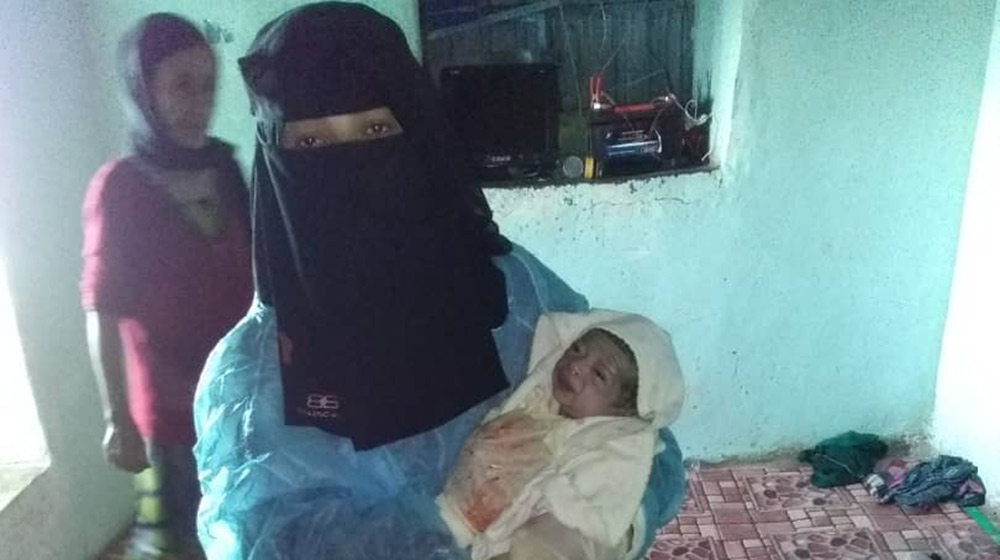