UNITED NATIONS, New York — Her friends call her Natalia, but it’s not her real name. This 20-year-old blonde from St. Petersburg tested positive for HIV a year ago. Natalia claims her stepfather forced her to have sex with him. “I was only 15 at the time and knew nothing of men or my own body,” she says with resignation. “When my mother found out about it, she blamed me and threw me out of the house. I lived on the street for a year before getting help through a hotline, set up by a local organization.” During that time, she had unprotected sex with a number of men “in order to survive.” 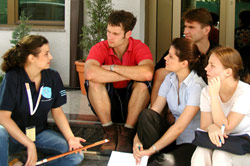 The organization that helped Natalia to get voluntary testing and counselling was part of an innovative network, pioneered by UNFPA, the United Nations Populations Fund, that links more than 3,000 peer educators with the support they need to educate their friends and cohorts about HIV and other sexually transmitted infections. “It’s too late for me,” Natalia sighs, “ but others can be saved from my fate thanks to the work being done by the peer education network. It has made a real difference in the lives of young people here.”

Y-PEER began in Eastern Europe and Central Asia in 2000, at a time when HIV prevalence was beginning to skyrocket, fueled by needle sharing among injecting drug users. According to surveys carried out in the region, fewer than half of all teenagers were using condoms when having sex with casual partners; among injecting drug users the figure was only 20 per cent. Since then, HIV has infiltrated the general population in many countries, hitting hardest among young people. Three out of four reported infections in the region between 2000 and 2004 were in people younger than 30 years.

In response to the burgeoning pandemic, community, religious and youth groups tried to harness the energy and enthusiasm of young people to turn the tide. The approach makes sense: Young people are deeply influenced by their peers. They tend to get most of their information about sexual behaviour and other sensitive subjects from one another. And often, as one peer educator put it, “in this time of information and modern living, young people may know more about these issues than their parents.” But providing young people with the proper training, the skills, guidance, incentives and the feedback they need to actually be effective peer educators proves to be a huge task. Y-PEER was launched to bring standards of excellence and shared expertise and resources to the many disparate efforts that were already on the ground.

Before Y-PEER was launched, an extensive needs assessment of ongoing efforts was carried out. This provided a detailed inventory of 185 peer education initiatives in the region (most were started by NGOs) and identified technical support needs. It found these groups were working in an ad-hoc and uncoordinated fashion. They had few training manuals and knowledge-sharing or support networks in place. Moreover, their projects were constrained by a lack of consistent funding and were not carefully monitored or evaluated.

The establishment of Y-PEER meant that economies of scale could be brought to the task through the creation of national networks and the standardization of training materials. (The training manual has now been adapted and translated into some 15 languages, and a new version has been developed to address cultural sensitivities in the Arab States region.) It meant that important lessons and useful practices could be widely shared, through face-to-face meetings, distance learning courses and Internet chat rooms. It meant that promising peer educators could, with experience, take on larger responsibilities and become skilled trainers and paid project managers. And it meant that young people could have the experience of being part of social movement large enough to make a difference.

“What we've done with Y-PEER is to go beyond ad hoc activities to create a coordinated social movement,” said Dr. Aleksandar Bodiroza, who manages the Y-PEER programme for UNFPA. “We're taking activities and techniques that have been developed at the community level and bringing them up to scale, using both the Internet and linkages with the mass media.”

As the network has continued to grow and mature, it has become the standard for similar efforts globally, Bodiroza said. “It’s the first successful effort to scale up peer education globally,” he added. “It’s become a franchise that others are replicating.” He estimates that Y-PEER touches the lives of more than 2 million young people each year, and says number continues to grow.

The initiative continues to rely on youth-to-youth outreach. “Experience shows that youth-to-youth programmes can be very effective in delivering the right messages on health in general and HIV/AIDS prevention in particular to both in-school and out-of-school youth,” observes Inga Akisamitauskaite, a peer educator from Lithuania. “Thanks to Y-PEER,” she continues, “we have an active web site, electronic mailing lists, training manuals and each other to share information and experiences.”

Forging alliances is also crucial to the success of Y-PEER and its efforts to empower young people to protect their health. For example, UNFPA and the Y-PEER network have partnered with MTV International since 2003 on the Staying Alive campaign. In 2005, this partnership resulted in numerous public service announcements and celebrity involvement at national and local levels. The campaign reaches close to 400 million households in 166 countries and territories.

In 2006, MTV is partnering with Y-PEER on other advocacy channels as well – including a weblog and a discussion forums based on gripping two-hour feature film produced by MTV. Filmed in St. Petersburg, Mexico City, Nairobi and Los Angeles, Transit follows eight young people across four continents, exploring their hopes, struggles, emotions, relationships and sexuality. The film is being promoted and featured through Y-PEER in six countries, where it will be used as a basis for focused discussions and awareness raising. A training guide has been developed to facilitate the effort.