DAKAR, Senegal – Youths from nearly 90 countries resolved to lead the crusade against HIV/AIDS all over the world, in adopting the Dakar Youth Empowerment Strategy at the end the Fourth World Youth Forum of the United Nations System, held in the Senegalese capital, from 6 to 10 August 2001. The Strategy will be conveyed to the General Assembly later this year. 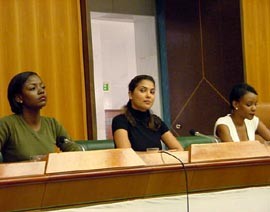 Their resolve on HIV/AIDS was relayed in a special annex they attached to the Dakar Strategy. The Secretary-General of the World Assembly of Youth and the Chairman of the World Youth Forum's Drafting Committee, Donald Charumbira of Zimbabwe, described the annex as one of the gathering’s most important developments.

“We resolve to practice and promote sexual responsibility, including through the right to choose not to have sex, and if we choose to have sex, the use of condoms,” the world’s youths stated in the annex. “We resolve to create and support programmes and projects to prevent the spread of HIV/AIDS, reduce stigma and discrimination related to HIV/AIDS, and support treatment, care and support of people living with HIV/AIDS.”

They asked governments and international institutions to mobilize sufficient resources, political will and appropriate policies to effectively combat HIV/AIDS, with the participation of youths, and to fulfil commitments in the Declaration on HIV/AIDS adopted last June at the General Assembly’s special session on HIV/AIDS.

The youths also called on those stakeholders and civil society groups to remove barriers to effective prevention, care and treatment. Those include laws that reduce access to essential medicines, discriminate against HIV-positive people, prevent the social marketing and free and low-cost distribution of condoms and other prevention materials, and those that restrict the flow of comprehensive sexuality education to youth.

They sought funding and support for “new technologies to fight HIV/AIDS, including new medications, female-controlled methods of contraception, including female condoms and microbicides, and culturally appropriate ways to spread information about HIV/AIDS prevention.”

The annex was based on the fact, the youths stated, that HIV/AIDS is the greatest threat to their generation and because more than one half of all new HIV/AIDS deaths occur among those below the age of 24.

The main body of the Dakar Strategy contains recommendations on 10 key issues, such as education and information and communications technology; employment; health and population; environment and human settlements; youth policy, participation and rights; as well as young women and girls.

On health and population, the world’s youths asked governments and the United Nations system for access to resources to set up formal and informal programmes of education on HIV/AIDS, substance abuse, sexual and reproductive health and mental health.

“We encourage all stakeholders to invest in compulsory and free education at all levels for girls, adolescents and young females, both in formal and non-formal environments,” the youths resolved on the question of young women and girls. “We demand cost reduction for contraceptives and AIDS treatment, and prevention/treatment for STDs.”

The World Youth Forum, hosted by the Government of Senegal, had the main purpose of empowering youths to participate more effectively in all aspects of society.

The UNFPA was one of the United Nations entities that participated in the Forum. It staged a panel discussion on young people and HIV/AIDS on the opening day during which three UNFPA Goodwill Ambassadors and Face to Face Campaign spokespersons called on fellow youths to lead the charge against the global scourge. Senegal’s Minister of Youth, the Environment and Public Hygiene also took part in the panel.

“HIV/AIDS is not only a health issue, it is now an issue of social development, an issue of women, an issue of economy and an issue of development in general,” said Minister Modou Fadah Diagne. “Since an AIDS cure is not available, the only solution we have now is prevention.”

“Young people today are not what cultures or religions perceive them to be,” said UNFPA Goodwill Ambassador Mpule Kwelagobe, stressing the need to accept today’s youths as they really were and to help them make responsible choices.

“At a time when myths, misconceptions, lack of information and television surround young people, prevention needs to be an emphasis and priority,” said Ms. Kwelagobe. “An effective response involves a special focus on the needs of young people, especially those that are sexually active, by providing family planning information, counselling, voluntary testing and treatment for sexually transmitted diseases, all of this in youth-friendly health centres.”

“The promotion of safer sexual behaviour,” said Ms. Kwelagobe, “through abstinence, fidelity and condom use,” would help prevent HIV/AIDS. She provided examples of how the UNFPA helps prevent the disease in some 140 countries. They ranged from a Nigerian television series, "I Need to Know", to the Peer Adolescent Counselling by Teenagers (PACT) project, which she underwent in Botswana.

After South Africa, India has the largest number of AIDS cases, with the possibility of having an HIV-positive member in every family in the next 10 years, said Lara Dutta, another UNFPA Goodwill Ambassador. “It could be me, in 10 years I could be dead.” One of the reasons for HIV/AIDS spread in her country, she said, was the sex trade, which many women are unable to leave because it is their main source of survival.

Women, Ms. Dutta said, were more prone to HIV/AIDS infection due to higher levels of illiteracy, lack of resources, cultural barriers, myths, misconceptions and substance abuse. Gender equality should be promoted to address HIV/AIDS, she suggested. 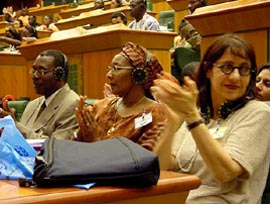 “Since youth are the greatest organizers and can mobilize quickly, they should become more actively involved,” said Ms. Dutta. “They should be involved in providing information, behaviour change communication, counselling and youth-friendly services that encourage self-protection, abstinence and delayed sexual activity. … Most importantly, give the youth a chance to speak out and listen.”

Since HIV/AIDS thrives in a culture of silence and denial, that situation must be reversed to stop its spread, said Wendy Fitzwilliam, Goodwill Ambassador of the Joint United Nations Programme on HIV/AIDS (UNAIDS). Since HIV/AIDS will not wait for a moral revolution, it should be addressed urgently and openly with appropriate information provided to save the lives of the young, particularly since sexual activity starts at the age of 10 in some Caribbean countries. Between the ages of 13 and 19, she said, infected women outnumber men seven to one because girls are prone to pressure from infected older men.

The Dakar Forum was the fourth such gathering organized by the United Nations and the first held in a developing country. The first two sessions took place in Vienna in 1991 and 1996, while the third was held in Braga, Portugal, in 1998. The World Youth Forum was mandated by the World Programme of Action for Youth to the Year 2000 and Beyond, adopted by the United Nations General Assembly in 1995, on the tenth anniversary of International Youth Year. 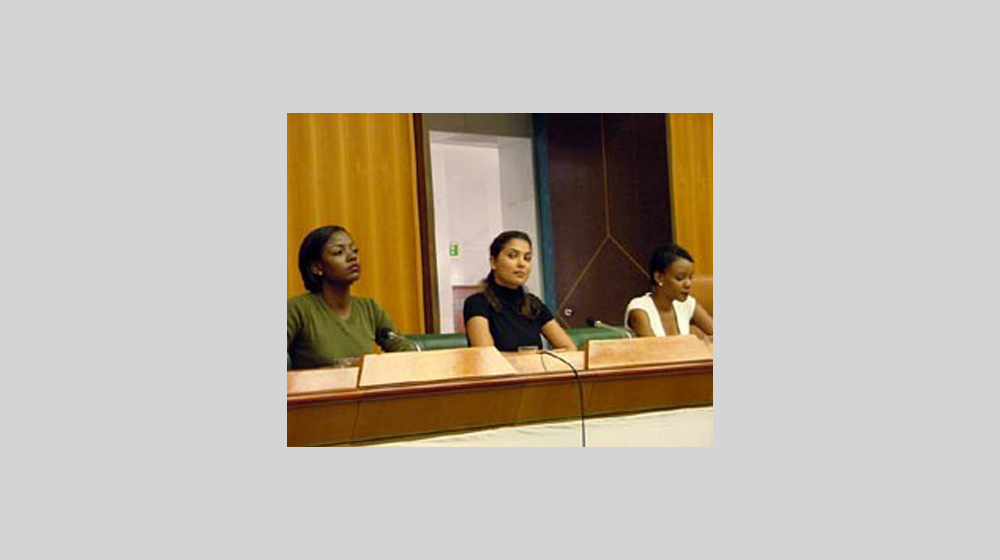 Condoms and lubricants in the time of COVID-19