KARBALA, Iraq – Nadyia had to make a decision. Shortly after members of the Islamic State in Iraq and the Levant (ISIL) seized control of Tall Afar, in north-western Iraq, she says the militants forcibly removed her husband from their home. She could not be certain of his fate – and says she is not to this day; however, judging from what she did know of ISIL’s brutality, she presumed that his abductors murdered him.

She also knew that ISIL employs sexual and gender-based violence as a tool of war and forces women and girls into sex slavery. And so Nadyia felt she had no choice but to flee Tall Afar with her five-year-old daughter – despite the fact that her child suffered from a heart condition. As they travelled the 600 kilometres to safety in Karbala, largely on foot, through combat-ridden terrain, the physical exertion aggravated her daughter’s condition.

Nadyia managed to collect enough money to buy her medication, but it proved insufficient, and shortly after they arrived in Karbala, her daughter died. “We came alone with no hope and to an unknown fate,” says Nadyia. “I lost my husband there, and I lost my only child here.”

Dunya, a social worker at Tiba WCC, a UNFPA-supported women’s centre in Karbala, has met over 60 widows who, like Nadyia, fled Tall Afar after ISIL seized control, and reports that many of them have been victims of ISIL’s sexual brutality.

“The situation on the ground here is grim. Sexual violence has become a systematic approach used by ISIL,” says Dunya. “Many of their husbands have been killed by ISIL, and they feel completely lost. No shelter. No support. They hold only fear of tomorrow.”

But Dunya and others are working to change that by helping the women to first find shelter, usually in nearby villages, and then to build a vision for their future, gradually, one psychosocial support session at a time. 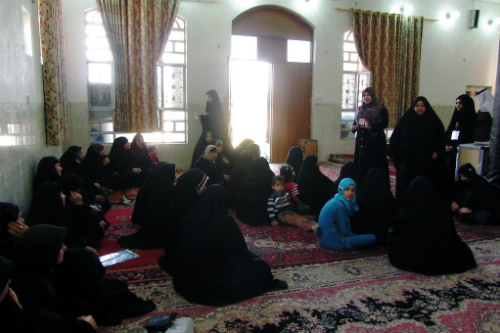 Women and children participate in a group psychosocial support session held at a mosque in Karbala. © UNFPA Iraq

Many women arrive alone and afraid

As of November 2015, there were approximately 3.3 million internally displaced persons in Iraq and 250,000 refugees from Syria. And many of the most vulnerable with the fewest resources are widowed women and girls.

In Iraq, nearly one in five women marry before the age of 18. In Syria, the rate was 13 per cent before the current conflict, but focus groups and interviews held by UNFPA show that the rate is rising amidst the chaos. As a result, many of the displaced and widowed women in Iraq married young, and, as with many women who marry before, during, or immediately after adolescence, they have received very little education and have very little experience working and living outside a home controlled by their husband or father.

In an effort to help these women and girls navigate their new independence and deal with their recent traumas, the social workers of Tiba WCC visit them in their homes to build trust, provide individual psychosocial support sessions and offer group sessions at a local mosque, which community leaders donated as Safe Space for displaced women and girls.

“We are trying to rebuild trust among these women by reminding them that they are human beings who deserve to be protected and who have the right to live a life of dignity,” says Suha Nimir, the UNFPA gender-based violence focal point in Baghdad.

In addition to counselling, the social workers also help the women get jobs, many for the first time, and encourage them to enrol in school. UNFPA is also supporting programmes to provide the women and girls with sexual and reproductive health services. 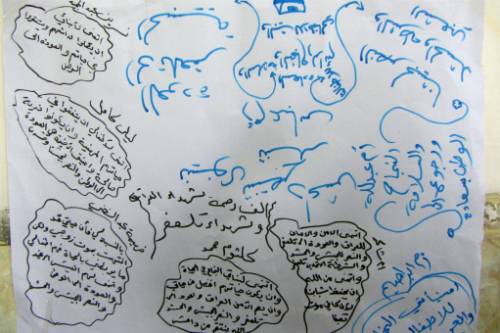 The "Dream Board" on which the widowed women wrote down their dreams for the future. © UNFPA Iraq

In one popular Tiba WCC group session called “Our Dreams,” the women learn strategies for caring for themselves and planning for the future, and then gather around a large white piece  of paper to write down their dreams.

“My dream is to be able to raise my daughters and educate them well to give them the chance to have a better life than I have,” says Kulthoom, a widow who participated in the activity.

And Nadyia is among Tiba WCC’s clients. After arriving in Karbala, she was able to track down relatives who had also fled the violence in Tall Afar. Shortly after moving in with them, Dunya and other social workers began visiting her in her new home to give her regular psychosocial support. Then, through support from both Tiba WCC and Bint Al Rafidain, a local nongovernmental organization, Nadyia began working as a baker. Currently, she is preparing for her exams to return to school.

“I am happy to have the social workers as sisters in my life, and they have given me many choices to start again. I am not sure if I have the capacity to succeed in school, but I will try, and I will see,” she says, with determination and a hesitant but growing faith in herself and her future.