UNITED NATIONS, New York – Heads of State, dignitaries and other leaders participated today in a high-level debate at the United Nations Headquarters in New York, addressing the central role of human rights, dignity, equality and health to sustainable development.

Moderated by Rajesh Mirchandani, an anchor of BBC World News, the debate focused on the progress made and challenges remaining 20 years after the historic adoption of the Programme of Action of the International Conference on Population and Development (ICPD) in Cairo, Egypt. The ICPD brought the world to a consensus recognizing women and girls as individuals entitled to the same opportunities, choices and rights as men.

“The Programme of Action charted a course that truly brought together the two aspects of development we are discussing today: human progress and sustainability,” said Dr. Babatunde Osotimehin, Executive Director of the United Nations Population Fund (UNFPA). “Fewer women are dying in pregnancy and childbirth. Maternal mortality worldwide fell by nearly half between 1990 and 2010. More women have access to education, work and political participation. More children, girls in particular, are going to school, with primary school enrolment rates approaching 90 per cent.”

But the event also underlined the vast scale of work that remains to be done. 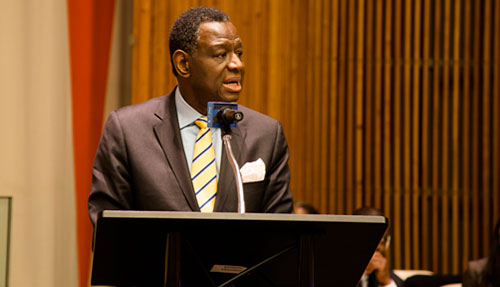 “Nine out of 10 adolescent pregnancies take place in the context of child marriage,” Dr. Osotimehin said. “You know what that means – it spells the end of education, risks their lives and totally wipes out their potential.”

Dr. Fred Sai, who was Chairman of the 1994 Cairo Conference, also emphasized this point: “There is so much more we must do. There are still 220 or more million women in the world who want to prevent pregnancy but are not able to do so,” he said. “Women are still losing their lives while bringing new life into the world. Most of these deaths are completely preventable.”

The event inaugurated the 47th session of the Commission on Population and Development, at which the world is set to renew its commitment to the ICPD Programme of Action. Participants at the high-level debate urged further efforts to address unmet needs and future challenges.

“This topic we are discussing today will continue to be a top priority of the 21st century,” said Mervat Tallawy, Chairwoman of Egypt’s National Council for Women. “We have achieved and attained many successes since Cairo, yet the ICPD remains an unfinished agenda.”

Participants also underscored the need to invest in youth and their rights.

Former President of Mozambique Joaquim Chissano, who is Co-Chair of the ICPD High-Level Task Force, made this point. “The world has changed since 1994, and when we look to the future, we need to do so with an eye towards what needs to be done. And this must include fulfilling sexual and reproductive health and rights for everyone, especially women, adolescents and youth, now in the 21st century.”

The last 20 years has “shown that promoting and protecting human rights, investing in people and putting people at the centre of development are preconditions to sustainable development,” Dr. Osotimehin said, pressing for these lessons to inform future development efforts.

The other participants agreed.

“We must ensure that reproductive health is at the top of the development agenda,” said Dr. Sai.

He added, to a standing ovation: “On bended knees – old and creaky – I urge you to complete the journey we started so long, long ago.”

The event was webcast live, and Twitter users engaged in a global real-time conversation about it using the hashtag #ICPDdebate.