WASHINGTON, D.C. — “When I was nine years old I dreamed of becoming a lawyer,” Viviana Palacios, 23, from Colombia told a packed auditorium on the second day of the Women Deliver conference.

It was an ambitious dream for a girl who lived as a displaced person in a territory overrun with guerrilla warfare, dropped out of school to work and provide for her family, got pregnant at the age of 16, suffered domestic violence and faced the challenges of being a single mother in a developing country. Yet now she is in her third year of law school and also works as an activist for youth rights. It has been a long, hard journey.

“My dream today is that we will work together for the new generation of young people. My dream is that my son, your children, and all girls will live in a world without war and with opportunities for all.” And then she showed the audience the sandals that her mother had made for her so she could come to Washington to tell her story.

In a conference brimming with experts, the personal stories of women advocates from four regions lent human faces and emotional depth to the facts, figures and opinions presented at the other panels and plenaries.

Viviana and three other powerful women from four regions told of the circumstances they overcame to end up at this conference as advocates for maternal health. They brought to the room, and to the conference, vivid images of places where deeply entrenched inequalities can leave women so vulnerable that they may have a hard time deciding whether to survive and fight or surrender to death and an escape from pain, humiliation and sadness.

As highlighted by the Special Adviser to the UN Secretary-General and renowned activist Dr. Nafis Sadik, who moderated the panel, impoverished women, especially those living in developing countries, suffer disproportionately from unintended pregnancies, maternal death and disability, gender-based violence and other problems related to their sexual and reproductive life. The four panelists, including Ms. Sarah Omega, Ms. Awatif Altayib and Ms. Laxmi Tamang, as well as Viviana, all managed to overcome adversity through their courage, determination and a lucky break or two. 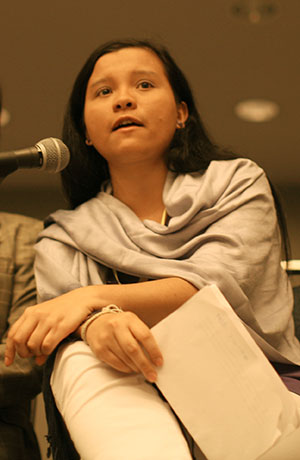 “It was very difficult to accept that I was pregnant; I thought that I would not be able to achieve many of my dreams. Living with the father of my son was becoming increasingly difficult, almost impossible. I was the victim of physical and verbal abuse,” Viviana recalls.

“One day he left and never came back. Alone and with my son I returned to live with my parents. But it was also difficult because now we were ten people at my parents’ home.”

As she remembers those days, Viviana looks away as if watching a play with a complex plot. Teenage pregnancy is a major problem in most developing countries, making it more difficult to break the cycle of poverty.

“I started school again at night, and I worked during the day at a 24-hour hotel, seven days a week, where I was paid approximately $150 a month. One day, thanks to my Dad, I got involved in a youth programme where I learned about human rights and the rights of young women. I learned that my body is mine, and I decide about it. I had the right to say no to sex.”

Sarah: Triply punished simply for being a woman 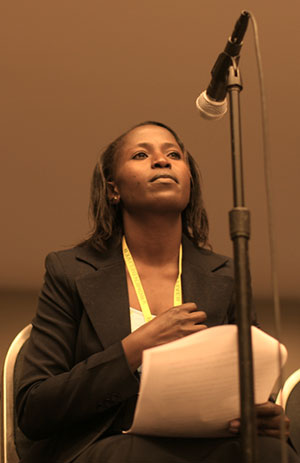 Sarah Omega, 33, of Kenya lived a very different life, but she, too, faced poverty, abuse, injustice and despair.

“I lost my parents in 1987 and 1989, respectively, and I was left alone with my other eight siblings. I later dropped out of school due to financial instability in the family. Our home being in a region where girl-child marriage is commonly practiced, I literally ran away from home joining my elder sister for my safety after two men came to ask for my hand in marriage. One of them was my former primary school teacher.”

Trying to control the emotion of revisiting her troubled past, Sarah stops, looks down and shakes her head as if to send the memories away.

“Running away was like jumping out of the frying pan into the fire since it was in my hiding place where I encountered the beastly act of rape by a religious leader, which led to an unwanted pregnancy at the age of 19,” she said.

When it was time to deliver, Sarah could only reach a health facility after labouring at home for more than 20 hours. There she waited alone for 18 hours more before a gynaecologist came to see her.

“By this time I had already lost my baby due to lack of essential supplies in the institution. I was referred to another health facility where I delivered through Caesarian section to a stillborn baby boy of 4.8kg [10.6 pounds]. Three days after the operation I noticed the leaking of urine. After two months I was discharged with the hopeless message that I could only be treated if a specialist from abroad came to the country.”

“Triple punishment! – the rape, the loss of my baby and now the leaking of urine. Back at home life was unbearable. Every night, while my bedding got wet due to the urine that leaked from me, my pillow got wet from tears due to the pain from genital sores. While other young people welcomed each day with gladness and expectations, to me each day carried humiliation, rejection and pain.”

Sarah lived with obstetric fistula for 12 years, but she still wonders why other women should continue to suffer as she suffered when the world has both the ability and resources to end such heartbreaking stories.

“For those who are not familiar with the term, obstetric fistula is a childbirth-related injury that leaves a woman unable to control urine or feces. A condition that has made women suffer rejection and isolation. In some communities they are even treated as outcasts due to the foul smell,” explained Sarah.

“In Kenya, it is estimated that we have 3,000 new fistula occurrences each year, but only 7 per cent of these women get treatment, therefore leaving us with a backlog of over 300,000. For this reason, I have been going to the community to get women who are suffering in silence and refer them to a health facility where they can receive treatment,” she said.

“But if we emphasize only treatment this puts us in a situation of doing it forever. Prevention measures should be put into consideration as the best way to address maternal mortality and morbidity. Prevention goes beyond strengthening health systems. It should address issues such as increasing public awareness about the value of the girl-child, strengthening women’s self image, self esteem and status. We have to take a lead to empower women socially and economically for these are basic factors contributing to maternal mortality and morbidity.” 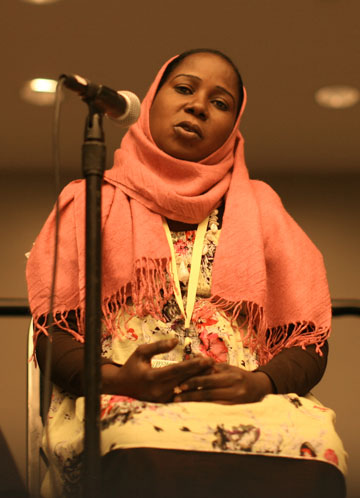 As Awatif Altayib, 30, of Sudan, listens to Sarah Omega’s story, she starts to cry. She knows all about being an outcast, living in pain and shame as a result of a childbirth injury.

“I was married when I was 16 years old, and I immediately became pregnant. There was no doctor in the village, and I had an obstructed labour. They transferred me to the nearest hospital, at a distance of nine hours by car. When I arrived the baby was already dead, and I developed a fistula.”

Awatif’s face is a fierce mirror where several emotions pass by, all subdued by a strong will, almost saying “I won’t cry, I can’t cry.” The people in the auditorium seem to be mesmerized by her. They don’t blink, they don’t move. They just take in the words quickly translated from Arabic.

“The first attempted repair did not succeed, and I waited six months to try a second repair, which also failed. When my husband took me to have a third operation, we were stopped in the road by bandits who took everything we had. Since there was no money left for the third operation, we returned to the village to save money. Back in the village I became pregnant again, but my husband abandoned me because of the fistula.”

Awatif was lucky in the fact that her family was able to support her. She managed to get training as a community midwife and eventually had access to proper treatment. After having her fistula repaired, she began working as a midwife. “I wanted to help women to avoid bleeding. Every time there is an obstructed labour we take the woman to the hospital. Thank God we can do that now.”

Laxmi: Sparing others the pain that her own mother endured 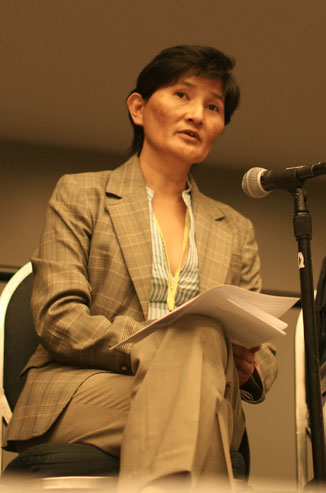 Motherhood is still a very risky endeavor in many countries. “My own mother discouraged me and my siblings from getting married and having children because of the pain and suffering that she experienced during childbirth. She did not want her daughters to go through the same ordeal,” said Laxmi Tamang, 39, a nurse and midwife from Nepal.

“My mother had long labours, heavy bleeding and was not given adequate food and care during childbirth. She became an inspiration to me, so that I could make a difference in the lives of women. I feel that I am born in this world to do something good and better, especially for rural women,” she explained.

By providing family planning education and services, and maternal health care, midwives can help ensure that every pregnancy is wanted and every birth is safe. If obstructed labour is detected early, women can be referred to a hospital to have a Caesarian section, and this could prevent nearly all cases of obstetric fistula.

However in underdeveloped, rural and insecure regions, the vast majority of births take place without assistance of trained professionals.

“I've committed my life to help women. I urge everyone working for women's health to make thoughtful evidence-based decisions and to take action to promote successful interventions like the midwifery mode of care to reduce maternal and neonatal mortality and morbidity,” said Laxmi.

Reaping the rewards of empowerment

As they carved their way out of pain and suffering, Viviana, Sarah, Awatif and Laxmi were empowered themselves and helped to empower other women, whose lives may not have such happy endings.

Viviana will be a lawyer soon and will continue her trajectory to make the rights of youth a priority in her country. Sarah plans to build a family together with her boyfriend, a man who loves, respects and cares for her. Awatif will get married in August. This time, she chose her husband herself, and he has promised to support her in her professional life as a midwife. Laxmi is still committed to bringing change into women's lives. She believes that healthy women make healthy communities and nations.

And as we observe these four women living the panel with a confident smile in their faces, the question that remains is not how these women were able to overcome their tribulations, but how society will support them and help prevent that other women suffer the same in the future so that they can continue to deliver.