ALEPPO, Syria/UNITED NATIONS, Brussels – “Life quickly became an open-air prison after the war,” a young woman from Aleppo told UNFPA. “We were instructed not to leave our houses for fear of harassment, rape and kidnap. I was told that child marriage was my only path to true safety.”

More than a decade of grinding conflict, mass displacement, economic devastation, multiple droughts, and an unrelenting pandemic are fuelling catastrophic humanitarian needs in Syria. Some 7.3 million women and girls need critical sexual and reproductive health services and support for gender-based violence, as vulnerabilities to multiple forms of physical and sexual violence and child marriage continue to soar.

Many women and girls report abuse to be so widespread and unchecked, it has become normalized as a reality of daily life. For some, it is all they have ever known. “Violence against women and girls has become so common after the crisis,” explained Shaza, an adolescent girl from Qamishli in northeast Syria. “Many women in my family are struggling and cannot find the right support. I see more women being beaten by men in their families, and sometimes in public.”

In 2022, an estimated 26.5 million people are in need due to the crisis: 14.6 million people inside Syria and approximately 12 million across the region, including 5.6 million Syrian refugees and host community members. The crisis is taking a particularly heavy toll on women and girls. Severe funding shortfalls, ongoing hostilities and fuel shortages are disrupting the delivery of essential services – with a direct impact on their health, safety and lives.

Meanwhile the United Nations World Food Programme reports that the cost of basic food such as rice and bread have reached their highest levels since recording started, and could be pushed even higher by the war in Ukraine. Nine out of ten people in Syria now live below the poverty line, and when food is scarce it is often women and girls who eat last and least, leading to alarming levels of malnutrition among children and pregnant and lactating women.

On 9 and 10 May, the European Union held its 6th Brussels Conference on Syria, the main pledging event for the country and the region in 2022. While political attention is diverted to newer conflicts unfolding around the world, millions of Syrians in crisis are in danger of being forgotten.

“The situation is worse now than ever for women and girls,” said Dr. Luay Shabaneh, UNFPA’s Regional Director in the Arab States. “We must step up efforts and work together to ensure that women and girls’ rights to give birth safely and live free from violence are protected, and that they can actively participate in finding a sustainable path forward.”

UNICEF estimates that more than 3 million children from Syria are no longer in school, leaving them at heightened risk of forced marriage and child labour. This means an entire generation could lose their educational future, and with it any chance of successfully joining the workforce as adults. The situation is even more dire in displacement camps and other settlements, where more than half of the children are not in school.

Betul is 12 years old and recently moved with her family from Syria to Turkey, where she was able to attend a UNFPA-supported youth centre. She described the support she received there as life-altering: “I don’t want to get married. I want to study, and the centre helped make that a reality.” Betul also started receiving psychosocial support at the centre to respond to her family’s pressure to get married. “I talked to the psychologist and explained my situation. They guided me on how to talk with my family, and I followed their advice. I’m in school now and hope to go to university next.”

Throughout the region, UNFPA is supporting 79 women and girls’ safe spaces, 15 youth centres, 26 emergency obstetric care facilities, 119 primary health-care centres and 94 mobile clinics. UNFPA and its partners remain committed to providing life-saving services to women and girls in Syria and in camps and host communities across the region.

An estimated 70 per cent of the population cannot meet their basic needs, yet at the end of 2021 the humanitarian response for Syria was less than 50 per cent funded – the lowest levels seen in six years. UNFPA is appealing for $145.2 million in 2022 to continue its life-saving work inside Syria and the five neighbouring countries hosting the majority of Syrian refugees – Egypt, Iraq, Jordan, Lebanon and Turkey.

Over the past five years, UNFPA has ramped up its regional response to the crisis, doubling the number of people reached since its onset in 2011. In 2021 alone, more than 1.1 million women received sexual and reproductive health services and some 600,000 were supported with gender-based violence response and protection, including 200,000 adolescent girls. Around 150,000 women were provided with cash assistance. 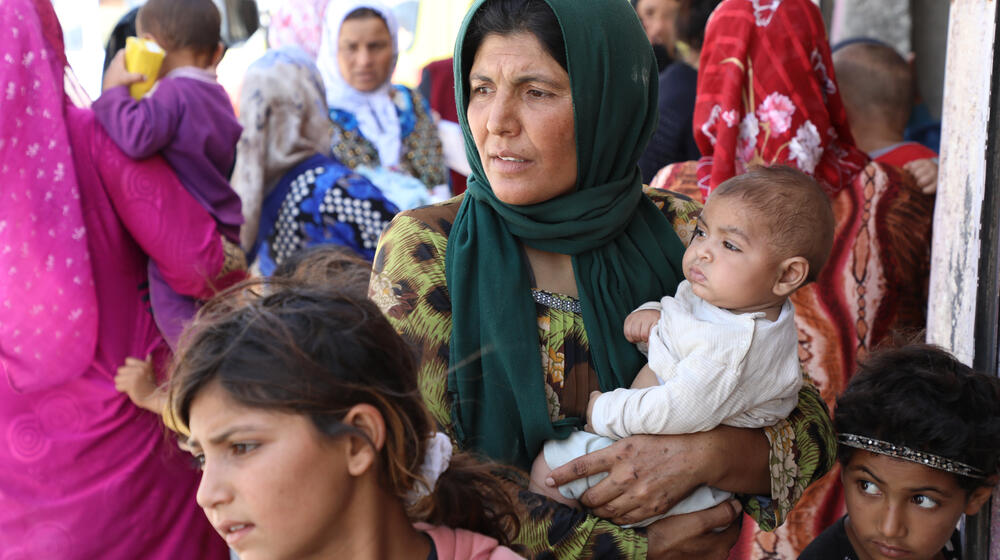 Betul, a 12-year-old girl from #Syria, will avoid child marriage and stay in school. This is the result of @UNFPA’s work in #Syria and countries hosting Syrian refugees. To continue our life-saving work, we need more than $145 million: unf.pa/agr