DEIR ALLA, Jordan – “All I know is that I needed help badly,” said Reem,* a 22-year-old mother of three, at a women’s centre in Deir Alla, Jordan, supported by UNFPA and the Institute for Family Health (IFH).

“Without the help of the social workers here in the centre, I would have committed suicide,” she said.

Reem is one of some 619,000 Syrian refugees who have been forced to cross the border into Jordan. Her family has struggled to adjust. “Our lives changed in one day, when we had to flee to Jordan from the horror and violence in Syria,” she said.

The terror stayed with them. Her husband was overwhelmed with fear for the family’s safety. He even restricted Reem’s movements.

“My husband was so obsessed after we arrived here that he didn’t want us to cross the house door,” she said.

“I learned about this centre from my neighbours. I visited them and explained our problem. In turn, the staff sat with me and my husband several times, individually and together. They gave us a great help.”

The Deir Alla centre is one of many IFH centres supported by UNFPA in Jordan. These centres offer a range of services to women throughout Jordan, including reproductive health services such as antenatal care and family planning counselling. They also provide psychosocial assistance, legal counselling and support for survivors of gender-based violence.

Since the outbreak of the Syrian crisis, these centres have been an important resource for Syrian refugee women and girls. 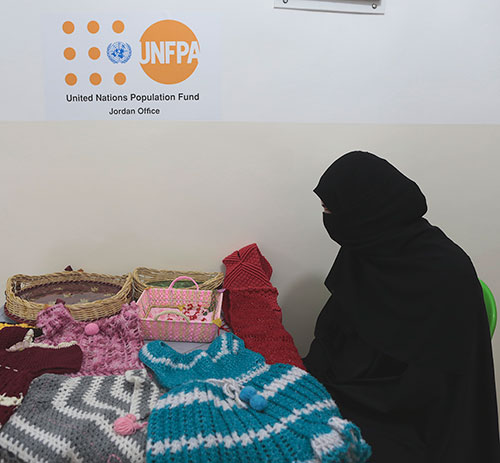 Reem sits beside a display of clothing she made through a skills-building course at the Deir Alla centre. Photo credit: UNFPA/David Brunetti

The Deir Alla centre has also begun offering skills-building programmes, such as knitting and beadwork classes, which could potentially help women earn an income.

Reem began attending these courses, and soon developed a passion for knitting. While she spoke to UNFPA, she was knitting a wool hat. “Because of the help of the social workers here, I realized that I’m excellent at knitting,” she said.

She and the other students now proudly display clothes they have made. “This helped me regain strength and happiness,” Reem said.

*Name has been changed