“We must resolutely resist any attempts to go back”: Listening to the icons and activists of women’s rights

UNITED NATIONS, New York – The eighth of March is International Women’s Day, and the stakes could not be higher.

This year marks a quarter century since the creation of the Beijing Declaration and Platform for Action, a global blueprint for advancing the rights of women. It called for equality in all spheres of life and – building on a landmark consensus reached the previous year – it affirmed that reproductive health and rights are central to achieving that goal.

“The first mark of respect for women is support for their reproductive rights,” said UNFPA’s then-Executive Director, Nafis Sadik, at the 1995 conference in Beijing where the Platform for Action was created.

“Reproductive rights involve more than the right to reproduce. They involve support for women in activities other than reproduction, in fact liberating women from a system of values which insists that reproduction is their only function,” she said.

This year, UNFPA is taking stock of progress made since that critical moment in Beijing. And, with United Nations partners, civil society, governments and activists, we are ramping up efforts to reach the elusive goal of full and total gender equality, once and for all.

The last quarter century has seen massive progress in women’s rights and welfare. Governments and authorities now accept as bedrock fact that sexual and reproductive health and rights are an indispensable part of global development. Few people -- if any – would openly reject the full and equal humanity of women and girls.

Yet the numbers show us how far we still have to go. Today, one in three women experiences physical or sexual violence in her lifetime. Twenty-one per cent of girls are married before age 18. An estimated 200 million women and girls alive have undergone female genital mutilation. Women are more likely than men to be poor and illiterate; they have less access to property ownership, credit, training and employment; they are less likely to be politically active and far less likely to arise to positions of power.

These deprivations are too often expressed as a lack of reproductive autonomy and health: More than 200 million women around the world want to prevent pregnancy but are not using reliable contraception. Every year, nearly 300,000 women die of pregnancy-related causes; the vast majority of these deaths are preventable.

Meanwhile, the opposition to progress is only growing louder.

“Around the world, there is a pushback on women’s rights,” UN Secretary-General António Guterres said last March. “We witness increased violence against women, especially human rights defenders and women running for political office. We see online harassment and abuse of women who speak out. In some countries, homicide rates are going down – but murders of women are going up. In others, we see a rollback of legal protection against domestic violence or even female genital mutilation.”

But advocates of women’s rights will not be intimidated.

Dr. Sadik’s words from Beijing are as true today as they were 25 years ago: “We can go forward, but we must resolutely resist any attempts to go back.”

This year, as part of the Generation Equality campaign, UNFPA is celebrating earlier generations of women’s activists, whose unflagging efforts and indomitable spirit enabled the progress we enjoy today. And we look to a new generation of activists, who are carrying forward the torch of equality.

A century ago, Margaret Sanger founded the first “birth control” clinic in the United States – which later became the Planned Parenthood Federation of America. She also played a pivotal role in convincing Gregory Pincus to work on the oral contraceptive pill. Her insights remain just as relevant now as they were a hundred years ago: “No woman can call herself free who does not own and control her body. No woman can call herself free until she can choose consciously whether she will or will not be a mother.”

As an infant, Fawzia Koofi was abandoned to die under Afghanistan’s burning sun – just because she was born a girl. Her parents had a change of heart in time, but she would experience the crushing weight of misogyny again when the Taliban regime took power. She eventually launched a campaign to send girls to school, and went on to become one of the first women elected to the newly established Afghan Parliament. “I want my daughters to be respected as human beings; that’s the country I’m fighting for,” she said.

As an international development official at the United Kingdom, Julia Bunting worked to reframe thinking around maternal mortality, transforming it from an intractable problem to a solvable one. She also galvanized the FP2020 global pledge to extend family planning to an additional 120 million women and girls. She said: “All women and girls have the right, and must have the means, to decide freely and for themselves if and when to have children. Evidence shows us that when you give women and young people this right, their life chances are transformed.”

Renowned journalist Christiane Amanpour has spent decades training a spotlight on gender discrimination and gender-based violence, showing the world that women’s news is not a marginal subject; it is real news. Her reporting showed that women and girls “absolutely wanted to have control over their bodies, over their own sexual satisfaction, over who were their partners, who they could choose or not choose....”

Three decades ago, Byllye Yvonne Avery founded the National Black Women’s Health Project (now the Black Women’s Health Imperative), a movement to deal with mental and physical stressors affecting the health of black women. In 1984, the project identified violence as a key health issue—long before others acknowledged its role. “Our message to women: put yourself first,” she said.

A harrowing childbearing experience inspired prominent model Christy Turlington to direct the documentary No Woman No Cry, about maternal death and disability, and to launch the non-profit Every Mother Counts: “If we can’t support a woman while she is giving life, then we don’t support women.”

Across Mongolia, domestic violence was once considered unspeakable. For Enkhjargal Davaasuren, this was unacceptable. She founded the National Centre Against Violence and started a campaign to criminalizing domestic violence. “In a male-dominated, patriarchal society, women don’t realize how strong they can be. Be strong, but more importantly, be collectively strong.”

At just 16, Alejandra Teleguario Santizo began speaking out against sexual violence and acoso callejero – street harassment – in her community in Guatemala. She quickly became a recognizable leader and, with network of other empowered girls, she began campaigning against child marriage. “Persistence is important, because we will be able to achieve what we want as women. And get involved. That’s where change begins.” 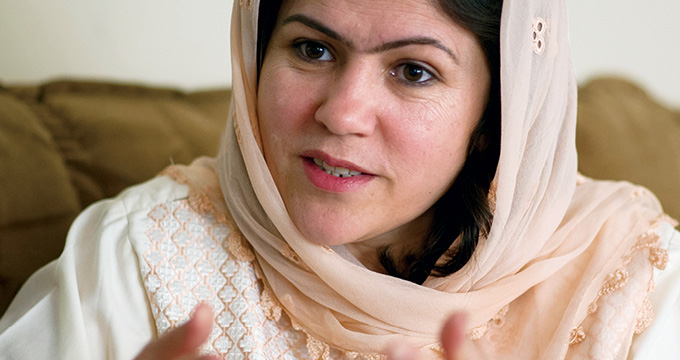 “We must resolutely resist any attempts to go back”: Listening to the icons and activists of women’s rights